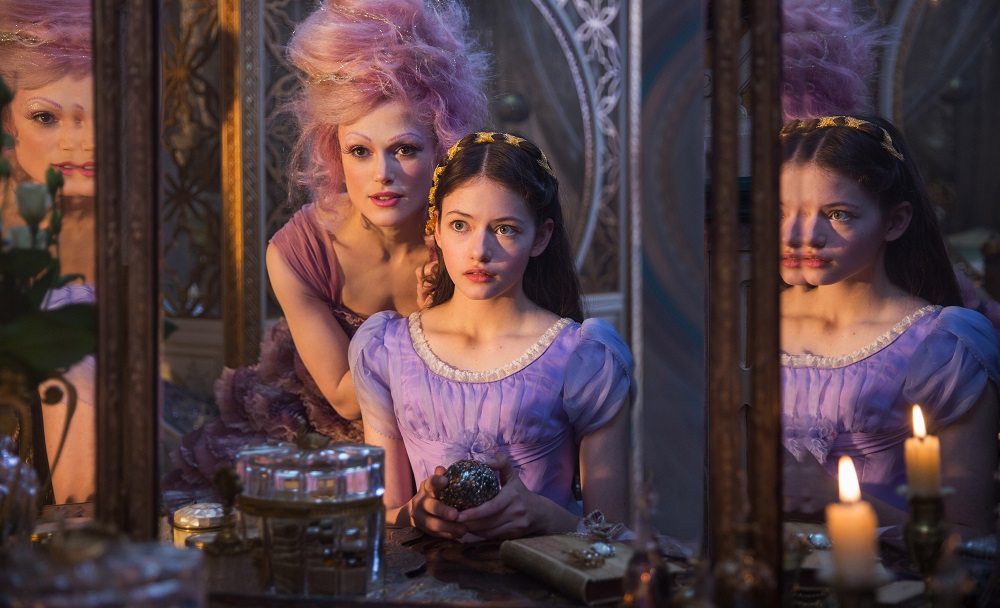 “The ballet tells the story of the Four Realms.”

Here’s what I wrote about The Nutcracker and the Four Realms back in my original theatrical review: 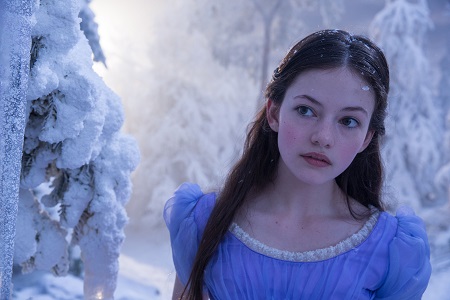 The Nutcracker and the Four Realms (2018)

“I’m not sure how Disney’s colorfully indulgent The Nutcracker and the Four Realms even exists. This fantastical reimagining of E.T.A. Hoffmann’s classic short story The Nutcracker and the Mouse King and of Pyotr Ilyich Tchaikovsky’s timeless ballet is a psychedelic playground of vibrant imagination and playful hogwash. Screenwriter Ashleigh Powell has crafted a story that is as rudimentary as they come, casually lifting ideas and scenarios from everything including C.S. Lewis’ The Chronicle of Narnia series, Lewis Carroll’s Alice in Wonderland, Roald Dahl’s Charlie and the Chocolate Factory and Victor Herbert’s 1903 operetta Babes in Toyland. But her story’s wide-eyed glee as it explores its strange characters and their surreal world is undeniable, as is its childlike enthusiasm to please audiences of all ages no matter what the cost. In short, this is as bizarre a confectionary cinematic creation as any I’ve seen in quite some time, and I’m honestly shocked that the studio heads at Walt Disney Pictures gave this one the go-ahead to begin production let alone grant it a full-blown theatrical release.

Before they head to the annual Christmas ball thrown by their godfather the inventor Drosselmeyer (Morgan Freeman), siblings Louise (Ellie Bamber), Clara (Mackenzie Foy) and Fritz Stahlbaum (Tom Sweet) are given presents by their father (Matthew Macfadyen) with express instructions to be opened on Christmas Eve. This was one of the final wishes of their recently departed mother Marie (Anna Madeley), her explicit instructions stating they must all be opened before the family heads out to Drosselmeyer’s party. While each receives a gift that most closely fits their personality, 14-year-old Clara’s item is somewhat perplexing. It’s a beautiful bejeweled egg that was one of her mother’s most cherished keepsakes, its inner secrets hidden thanks to a special locking mechanism that cannot be undone without the proper key.

Turns out, Drosselmeyer made this particular egg for Marie when she was a girl just about Clara’s age, and he knows exactly why she decided to entrust it to her inquisitive and intelligent daughter. But he can’t tell her why that is. These are all things Clara must learn for herself. So instead of finding her the key he plants before her a string that will lead the young girl to a faraway land where imagination runs rampant, sugar plum fairies exist and nutcrackers are loyal soldiers willing to do just about anything for those they choose to serve. It’s a strange world of mystery and magic, all of it once ruled by a beloved queen the citizens of all four realms of this candy-coated wonderland would do just about anything for, that person being none other than Clara’s late mother Marie.

This is a crazy movie. I’m not sure this parallel world that Clara finds herself in is actually ever given a name. If it was, I missed it. The place is this Oz-like playland where each of the four realms is oversaturated in wildly blossoming pinks, blues, greens, reds, whites and purples that pop off the screen with unbridled abandon. They are each governed by their own idiosyncratic regent, the Land of Snowflakes by the sentient icicle Shiver (Richard E. Grant), the Land of the Flowers by the constantly in bloom Hawthorne (Eugenio Derbez), the Land of Sweets by the bubbly Sugar Plum (Keira Knightley) and the Land of Amusements by the mouse-loving Mother Ginger (Helen Mirren).

The general gist of things is that Mother Ginger has been banished by the other three regents for trying to take over while Marie was away and now that Clara has arrived it will be up to her to decide what to do next. Aiding her is the Nutcracker soldier Captain Phillip (Jayden Fowora-Knight), his dauntless courage only dwarfed by his selflessness and capacity to love all those dearest to his heart. He’ll assist Clara in figuring out why Mother Ginger revolted as well as help her decipher the central mystery lurking inside Marie’s egg, the two of them discovering an inner resolve and untapped strengths neither ever knew they possessed.

It’s all as silly and as superficial as it sounds, and I can’t say narrative originality is exactly this film’s strong suit. But directors Lasse Hallström (My Life as a Dog) and Joe Johnston (Captain America: The First Avenger) seem to delight in all of their motion picture’s most surrealistic nuances. They allow Guy Hendrix Dyas’ (Passengers) magnificent production design and Jenny Beavan’s (Mad Max: Fury Road) astonishing costumes to overwhelm the proceedings, letting cinematographer Linus Sandgren’s (First Man) camera to slavishly take it all in almost as if it were a voyeur’s binoculars intent on reveling in every last detail right down to the seemingly most mundane item. The whole thing is a triumph of art direction, makeup, hairstyles and pointy-toed shows, the movie a visually resplendent marvel that only grows more creatively eye-popping as it goes along.

But this excess of style can compensate for the story’s increasingly obvious shortcoming for only so long. At a certain point, the fact this story is as obvious and as tired as it is does get frustrating. Even the central twist as to why exactly Mother Ginger was exiled and her Land of Amusements was allowed to rundown into bedraggled disrepair isn’t even moderately shocking, and considering none of the characters are exactly what anyone would call “well developed” getting emotionally attached to any of what Clara is currently going through is understandably difficult. Powell also throws in that most dated of Disney family film clichés and that’s the mysteriously dead mother, and while that doesn’t lessen the potency of the scenes featuring Marie in flashback, there is still something eye-rolling and tired about the trope being trotted out with such brazen obstinacy.

But Foy, probably best known for playing Bella Swan and Edward Cullen’s supernaturally eerie daughter Renesmee in The Twilight Saga: Breaking Dawn – Part 2, is a beguiling delight as Clara, her steadfast resolve undeniably charming. I also got quite the kick out of newcomer Fowora-Knight as the human nutcracker Phillip. There was just something about him, a little sparkle hidden within the eye and a knowing intelligence accompanying his smile, that just won me over, and if Disney ever wanted to finance some sort of teenage Before Sunrise knockoff featuring him and Foy I’d be first in line to buy a ticket to see it. As for the rest of the talented supporting cast, most of them get upstaged by their costumes, their makeup or by the production design, Mirren one of the relative few who manages to breakout of all this joyfully vibrant artifice in any noticeable way.

But as good as she is, as wonderful as Foy and Fowora-Knight might be, none of them can hold a candle to Knightley. Her performance as the Sugar Plum Fairy is one for the ages, and I’m not entirely certain whether or not this is a positive or a negative. The actress grabs a hold of this role and fearlessly goes for broke, sporting a Marilyn Monroe meets Betty Boop vocal style that befits her gaudily girlish costumes and suitably poofy cotton candy hair kind of perfectly. Knightley is so larger-than-life I found it impossible to take my eyes off of her. She’s a living doll, a flesh and blood cartoon character, the two-time Academy Award nominee putting on the kind of bravura go-for-broke showcase that’s so incredible there just aren’t words to describe its whack-a-doo magnificence properly. 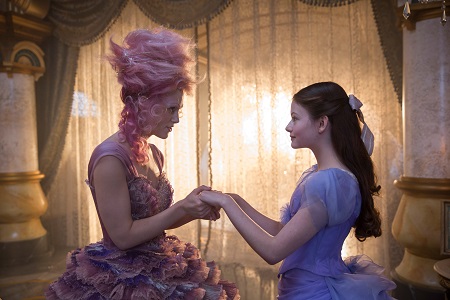 The Nutcracker and the Four Realms (2018)

None of which means I’m recommending The Nutcracker and the Four Realms to viewers any older than the age of eight, maybe nine-years-old. Even with a pair of superlative ballet sequences headlined by the wondrous Misty Copeland and a Fantasia homage that had me giddily giggling like some unhinged crazy person, this movie is ultimately just too whimsical and narratively threadbare for me to ever have been able to take it seriously. And yet, I’m still beyond happy that it exists, and part of me can’t help but think if I were to watch it again in the next couple of years my appreciation for what Hallström and Johnston are attempting might continue to grow. There is magic here. Not a lot of it but there definitely is some to be certain, and with that being the case maybe this newest utilization of Hoffman’s story and Tchaikovsky’s ballet isn’t such a waste of time after all.”

I was right. There is magic here. I enjoyed The Nutcracker and the Four Realms a heck of a lot more the second time around, my home viewing experience really quite delightful. It’s still a strange, messed-up movie that has far too much going on for its own good and its idiosyncrasies can get a little irritating at times, but even with that being so the film is still remarkably easy to watch even with all its more bizarre irregularities. It’s fun, and I have a feeling little kids are going to end up watching it over and over again if this title somehow finds a way to make it into their parents personal libraries.

On Pointe: A Conversation with Misty Copeland (4:36)

Unwrapping The Nutcracker and the Four Realms (7:08)

The Nutcracker and the Four Realms is growing on me. It’s still a strange movie that has way too much going on and one that never quite gets a handle on all of its various story elements. But it’s made with imagination and flair, and as a purely visual exercise much of it truly is delightful. Disney’s 4K presentation is pretty much perfect, the technical elements of this release beyond reproach. 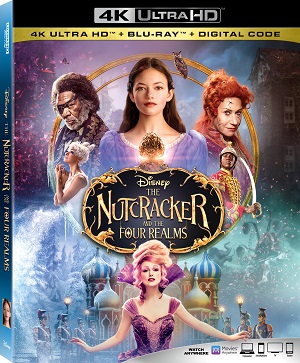