Commander Jack Harper (Tom Cruise) is a repairman. While the rest of humanity sits aboard a space station awaiting their opportunity to depart to a new life in a colony set up on one of Saturn’s moons, he and his beautiful communications technician Victoria (Andrea Riseborough) monitor things on Earth. After the alien invasion the planet was sadly devastated beyond salvation. It is the pair’s job to repair the defense drones tasked with protecting the massive water towers which slowly drain the oceans for transport to their new home, the few remaining invaders obsessed with bringing about their destruction.

For their safety and to protect the mission, both Jack and Victoria have had their memories wiped clean save the knowledge necessary to do their jobs. But the commander is obsessed with the Earth, longs to savor what it once was and to protect the wonders and secrets it still might hold. Yet nothing prepares him for how his mind is blown when an escape pod crash lands in the middle of a deserted corner of their patrol area containing lost Earth astronaut Julia (Olga Kurylenko), the woman in a state of stasis for the past 60 years.

Who is she? What is her connection to Jack? Why does her presence unsettle Victoria to such a high degree? Why is their contact aboard the space station, the preternaturally pleasant Sally (Melissa Leo), so unnervingly intent on having Julia join them for debriefing? Most of all, why are the alien scavengers, for so very long consumed with seeing Jack meet his death, now going out of their way to capture him? None of it makes sense, both the commander and his tech suddenly dealing with uncertainties the likes of which they beforehand couldn’t have imagined.

Not that we’re as confused as they are. The truth of the matter is director Joseph Kosinski’s (TRON: Legacy) sophomore effort Oblivion, with a screenplay written by the filmmaker, Karl Gajdusek (Trespass) and Michael Arndt (Little Miss Sunshine), and based on his own graphic novel (co-written with Arvid Nelson), isn’t anywhere near as complex or as tricky as it thinks it is. Freely cribbing from a variety of science fiction narratives of all varieties and stripes, the movie is a hodgepodge of genre tropes that are easy to decipher, making the resulting exploits of Commander Jack Harper et al not remotely surprising.

But much like Kosinski’s last effort, this lavish sci-fi spectacle is a feast for the ears and eyes. More, showing he’s learned at least a few lessons since TRON: Legacy, the characters, especially the core trio of Jack, Julia and Victoria, live and breathe like authentic human beings, giving them an emotional resonance worth caring about. There is a human side to this spectacle that is undeniable, allowing for an investment in the story that would not have occurred otherwise.

At the same time, there is a reason I am not talking about the myriad of films, television programs and pieces of literature Oblivion so freely borrows from, because to do so would ruin any chance this effort might potentially have to amaze. Kosinski’s scenario is so overly familiar, so blatantly unoriginal, so obsessed with ideas expressed by H.G. Wells, Philip K. Dick, Harlan Ellison, Richard Matheson, Rod Serling, Arthur C. Clarke and so many, many others, that figuring out which bits were culled from where is almost a game in and of itself. Problem is, it makes the scenario far less interesting than it could have been, undercutting the natural truisms of the situation making the movie nothing more than a muddy muddle that frustratingly never quite rises to the occasion.

It does look spectacular. Kosinski does a great job stringing sequences together, he and his editor Richard Francis-Bruce (Repo Men) smoothly layering their scenes, whether they be chains of intense action or moments of tender embrace, in a way that feels honestly naturalistic. The images he creates sparkle with visual ingenuity, cinematographer Claudio Miranda’s (Life of Pi) expressionistic imagery and M83 and Anthony Gonzalez’s (Black Heaven) pugnacious score giving things a hypnotic elegance that’s difficult to dislike. 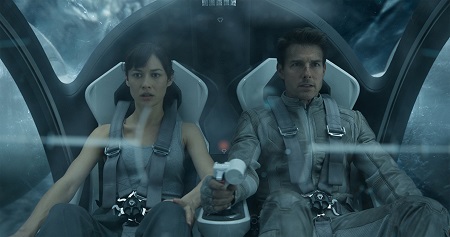 Did I enjoy Oblivion? Yes, for the most part. Cruise was made for this kind of stuff, while both Kurylenko and Riseborough make the most of their supporting parts, the latter particularly so. While both characters are rather sketchily written, Morgan Freeman shows up to give the proceedings an appealing sense of gravitas while “Game of Thrones” star Nikolaj Coster-Waldau makes an indelible impression as a character the less said about the better. The action sequences have a zippy electricity that kept my attention, the poetic fluidity of the images Kosinski crafted ones I couldn’t help but respond positively to.

None of this sadly changes the fact that for all its twists and turns the actual amount of surprise contained within Kosinski’s futuristic sci-fi tale is borderline nil. The movie comes to its conclusion with something of a semi-risible thud, the melodramatic fairy tale quality of the last moments laughable. Be that as it may, it’s hard for me to say that Oblivion didn’t keep me entertained, and even though after it was over I wanted to pick all 126 minutes to pieces, while I was sitting in the theatre I was more than content to soak in the visuals and not worry about anything else. 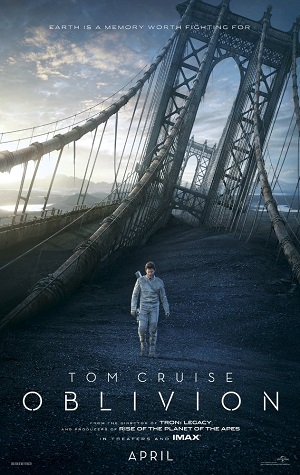