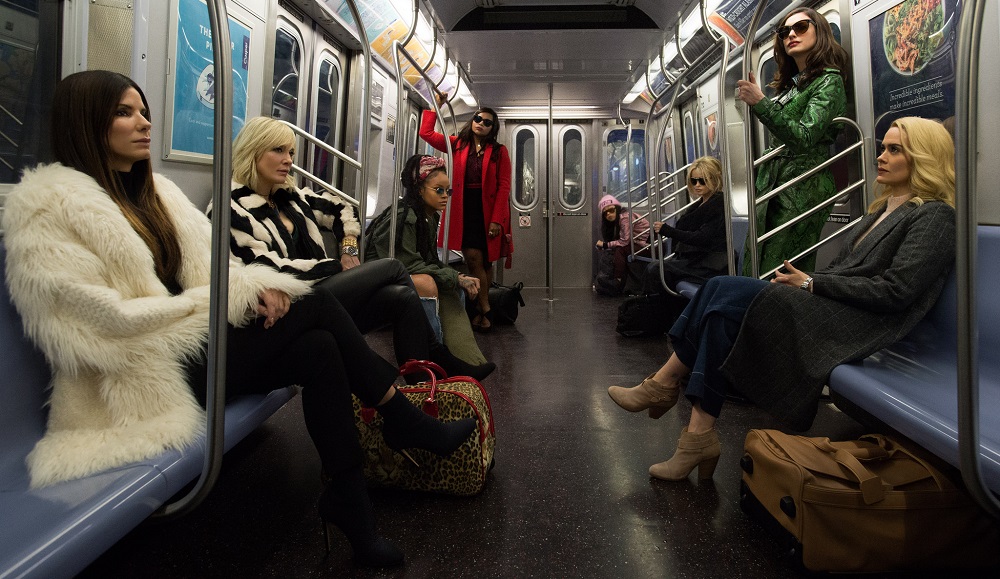 “In three and a half weeks, the Met will be hosting its annual ball, celebrating its new costume exhibit, and we are going to rob it.”

Here’s what I wrote about Ocean’s Eight back in my original theatrical review: 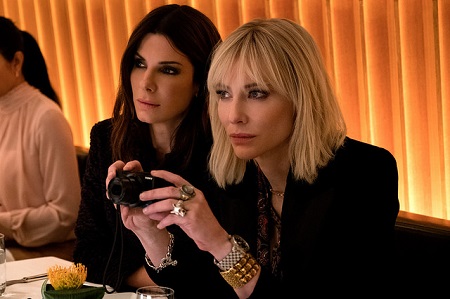 “The question one must ask when reviewing Ocean’s Eight is just how much to say about the film in order to not inadvertently give away any of its secrets. Not so much because the twists and turns hiding inside director Gary Ross (Pleasantville, The Hunger Games) and Olivia Milch’s (Dude) clever little screenplay are difficult to figure out (sadly most of them are not) but more because seeing them come to life on their own without any sort of foreknowledge is honestly kind of sensational, there’s so much to love here. A continuation in spirit of the three all-star heist films director Steven Soderbergh and star George Clooney took pleasure in creating back in the early-to-mid 2000’s, this female-driven variation is an enjoyable change of pace that makes its own stiletto-heeled mark upon the genre. It’s a heck of a lot of fun, and spelling things out any more than that feels slightly like overkill.

The rest of the cast has their respective moments, Bonham Carter, Rihanna and Paulson in particular. But it is Hathaway who comes closest to absconding with the entire picture right out from underneath her costars, the actress delivering a comedic performance that’s right up there with some of the best work of her career. Her Daphne is a walking self-deluded egotistical Hollywood stereotype come to dazzling, scene-stealing life, and watching the actress give her life with such fearless abandon is frankly delightful. But Hathaway has more cards to play than are initially apparent, and when the opportunity arises for her to flip the script and do something unexpected the Les Misérables Oscar-winner makes sure to make the most of the moment. It’s a flabbergasting turn of unbridled excellence that had me giggling in gleeful appreciation, and in some ways I almost wish the character could have been involved in all of this subterfuge more than she actually is.

There isn’t a lot of tension, and I can’t say there was ever a point I ever thought Debbie or any of her crew were in any danger of being caught. This makes the third act appearance of a dogged insurance investigator, played with noticeable gusto by James Corden, slightly underwhelming, while an additional reveal near the end, as cute as it might have been, really only exists to remind us all that this film does indeed remain linked to the three other male-dominated ones that came before it. I also can’t say this is going to stick with me like Ocean’s Eleven has, and other than wanting someone to please gift me every single outfit Bullock, Blanchett, Hathaway and Paulson wear (especially Blanchett) in the movie the ins and outs of many of the particular plot strands have already started to evaporate from my memory not 24-hours after my press screening.

Not that it matters. Ocean’s Eight stole my heart, and the theft of it has me grinning ear-to-ear. If this is the start to a new continuation of the franchise, and if the casts from the previous ones were to start intermingling with the one from this latest endeavor, I think my excitement level for such a thing might leap into the stratosphere never to come back down to earth. Bullock, Blanchett and the rest of these gals do a bang-up job making away with the goods, the enjoyment factor so high it almost feels criminal to have had as much fun watching this little trifle of a comedic heist thriller as I ultimately did.”

As much as I stick to just about every word of my original review, I was wrong about one thing: Ocean’s Eight IS as enjoyably rewatchable as Soderbergh/Clooney’s Ocean’s Eleven. I’ve put this disc on three times since receiving it for review and not once was I even moderately sad I was giving the film another look. This raucous heist stole my heart, the joy I feel every time I give it a look impossible to dismiss.

In many ways Ocean’s Eight is slowly climbing up my list of 2018 favorites. I just really love watching it, the joy it makes me feel when it comes to an end almost indescribable. Warner’s 4K Ultra HD presentation is immaculate and without question this release comes highly recommended. 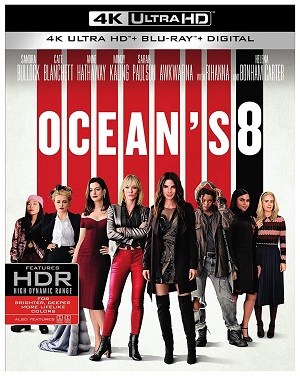