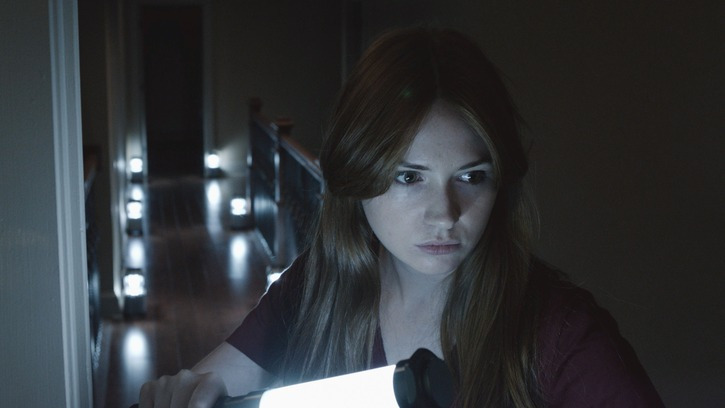 Unnerving Oculus Worth Gazing Into

It has been ten years since their parents Marie (Katee Sackhoff) and Alan Russell (Rory Cochrane) died under mysteriously violent circumstances. In that time, older sister Kaylie (Karen Gillan) has by all accounts made a good life for herself working at a prestigious auction house and getting engaged to smart, sexy coworker Michael Dumont (James Lafferty). As for younger brother Tim (Brenton Thwaites), he’s spent the time in a mental institution, incarcerated for shooting his father, believing the man was a threat to both him and his sister for reasons too fantastical to be believed.

On the day he is released, judged sane by the medical establishment, Kaylie meets him at the exit doors bubbling over in victorious excitement. You see, she’s known all along her brother was never insane and that their father was not responsible for the murder of their mother. More than that, she’s ready to exact revenge on the thing, the device, the artifact, an antique mirror known only asthe Lasser Glass, that was responsible. She just needs her brother’s help to do it. 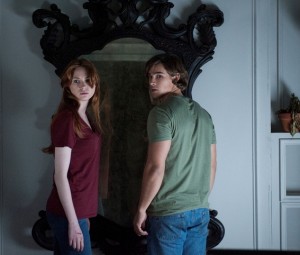 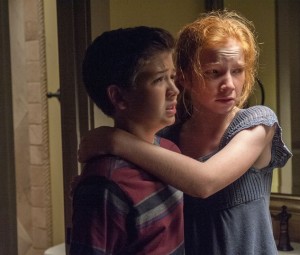 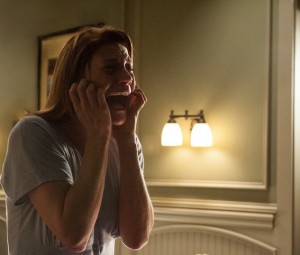 You have to be willing to accept the fact that Oculus revolves around the conceit of a haunted mirror. Once you do that, if you can allow yourself to go there, what proceeds is a surprisingly effective, shockingly intelligent thriller about self, identity and sanity that burrows its way under the skin. Working from his own acclaimed short film, director and co-writer Mike Flanagan (Absentia), along with screenwriter Jeff Howard, has crafted an unsettling and edgy little shocker, melding past and present, fact and fiction with mesmerizing aplomb.

Basically, once Kaylie and Tim lock themselves in their childhood home with the Lasser Glass, Oculus begins to split itself into two distinct tandems. On one side is their present day story, each sibling trying to reconcile their memories of past events. They grapple with whether or not the supposed power the mirror has to entrance, possess and ultimately destroy is actually real. In the other, we follow the pair as children (superbly portrayed by relative newcomers Annalise Basso and Garrett Ryan) realizing to their mutual horror that their parents are cracking at the seams, becoming murderous shells of their former selves spurred on by a supernatural force they can barely comprehend.

As the film progresses these two parallel storylines become more and more intertwined, the Lasser Glass effecting how each child recollects past events as they both try to put pieces back together. Flanagan does a masterful job, casting a visually disconcerting spell where truth is used to deceive and lies are utilized to reveal inner desires the victim has long tried to suppress. It’s terrifically tense, everything building to a suitably devastating conclusion fitting all that’s come before it beautifully.

Granted, things do take a little time to get going, the scenes of exposition delivered by Gillan wavering uncomfortably towards becoming unintentionally laughable. Additionally, there is a gigantic McGuffin quite literally hanging from the ceiling throughout the motion picture and when it finally crashes to earth it’s not exactly a shock the misery it exacts thus dulling the edges of any penultimate surprises quite a bit. Lafferty and fellow co-star Miguel Sandoval (playing Tim’s caring psychiatrist) are also given irritatingly little to do and part of me wonders if juicier moments for both actors were for whatever reason left on the cutting room floor.

Yet Oculus works. It builds tension gracefully, Flanagan using both his narrative tangents with a precise eloquence that cleanly speaking to the themes of self and identity I think he was shooting for. It is eerily shot by cinematographer Michael Fimognari (Unrest), while Russell Barnes’ (We Are What We Are) production design and Elizabeth Boller’s art direction are magnificent, the technical virtuosity giving seamless identity to both past and present portions of the story. Best of all is the score by Andy and Taylor Newton (billed as The Newton Brothers), their sonic soundscape augmenting the action with powerful, passionate thunder right up to the end.

I do wish there was a way Flanagan could have masked how things were going to turn out, the lack of suspense as far as the climactic moments were concerned a little unsatisfying. But up until then I couldn’t help but be impressed with what it was the director had accomplished. Oculus takes a “Twilight Zone” premise and runs with it into increasingly distressing corners, fleshing out its characters and its ideas with respect for both them and the audience buying a ticket to see it all happen. A thrilling gem, this is one genre outing worthy of gazing into the mirror more than once in order to get a better look at it. 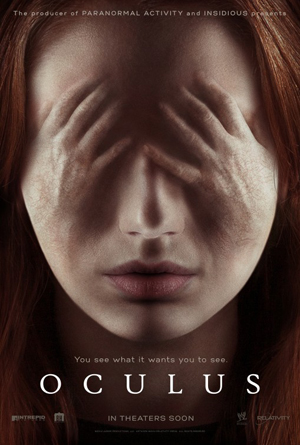