The first narrative feature to be allowed to shoot inside the Olympic Athletes Village, Olympic Dreams is a strong, emotionally-pure indie drama that took my breath away. Working from an idea conceived by director (and cinematographer, sound technician and even costume designer) Jeremy Teicher and actress Alexi Pappas (herself an Olympic athlete, competing in the 10,000 meters at the 2016 Rio Olympics), and with a free-flowing, mostly improvised script credited to Teicher, Pappas and co-star Nick Kroll, the level of human insight that is on display is nothing less than extraordinary. Putting it more bluntly, I loved this movie.

Set during the 2018 Winter Olympic Games in PyeongChang, South Korea, the story begins with American cross-country skier Penelope (Pappas) arriving to compete at the games. A bit of introvert, she’s noticeably nervous and is prone to calling her coach and leaving long, rambling messages. The young woman struggles to introduce herself to her fellow athletes while also trying to maintain her focus before she has to compete in her lone event.

At the same time Penelope is preparing for her race, volunteer dentist Ezra (Kroll) has also arrived in South Korea. He’s always dreamt of bringing his talents to an event like this but had never had the courage to apply up until now. But in doing so Ezra has put his current romantic relationship on life support, his fiancé calling off their wedding because she can’t understand why he wanted to trek halfway around the globe to offer up his dental services for free to a bunch of international athletes.

What follows is a character-driven relationship drama as Penelope and Ezra meet by chance, form something of a connection and then wander around the Athletes Village and other Olympic sites for a handful of days after her event has concluded. It also follows them individually as they interact with athletes from around the globe, she in the dormitories and common areas, he in the confines of his dental exam room. But mostly the focus is on Penelope and Ezra and their blossoming relationship, the way they end up connecting and understanding one another’s various needs the foundation upon which the entire film is built upon.

This one hit me hard. There are some stark, almost brutal truths I was noticeably shaken by, the consistent honesty of the dialogue and character interactions all facets of the production I found amazing. There is a mid-movie moment where Penelope drops a truth bomb on Ezra pertaining to hopes, dreams and goals that knocked me senseless, one not needing to be a world-class athlete to fully embrace the universality of her words.

The rest of the movie is also this refreshingly open and candid for pretty much the entirety of its brief 85-minute running time. The way in which Teicher, Pappas and Kroll allow things to happen so subtly and with such restraint is sublime. The flurry of crazy emotional convolutions affecting Penelope and Ezra makes the connection they share all the more genuine, and I loved that this core creative trio avoided both romantic comedy and inspirational sports story clichés for the entire film.

Can the picture sometimes feel like a static travelogue with two people wandering around a strange or unique environment not doing much of anything but being tourists? I guess for some it could come across that way, but I can’t say that was the case for me. I got a kick lout of watching Pappas and Kroll interact with a large swath of actual PyeongChang athletes, volunteers and staff, some of the best moment when Ezra is chatting up clients sitting in his dental chair and where Penelope is learning about Skeleton while luxuriating in a high-tech massage chair next to a Jamaican athlete.

As great as all of that stuff might be, and it’s all rather wonderful (just wait for the lovely beguiling simplicity of a scene in a South Korean beauty salon with Pappas and USA snowboarder Jamie Anderson), it are the scenes of interior contemplation that left me speechless. We barely see Penelope compete as it is the aftermath of her event that matters the most. We get to see who she is in these moments of personal reflection. We see the things that drive her to keep trying to exceed. We see how doing your absolute best can still feel like failure even when you’ve achieved something few will even ponder as being possible let alone put forth the effort to do so themselves.

What’s fantastic is that a viewer doesn’t have to be a world-class athlete to understand or relate to all that Penelope or Ezra are going through. Their travails are universal, and each and every one of us has pondered in our own way many of the questions they are and have suffered through a litany of similar highs and lows. Their relationship is timeless, echoing sentiments and ideas that can be found in somewhat similar dramas as seemingly disparate as Brief Encounter, Before Sunrise and Once. While I’m not placing Olympic Dreams on their pedestal (at least not yet), I do still think this is a gold medal-winning piece of meditative entertainment worth making the time to go and see. 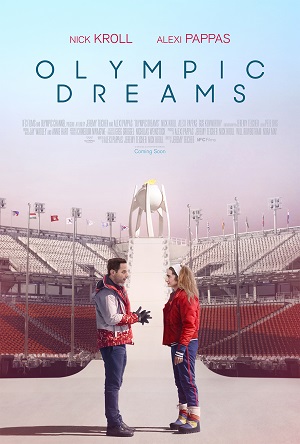