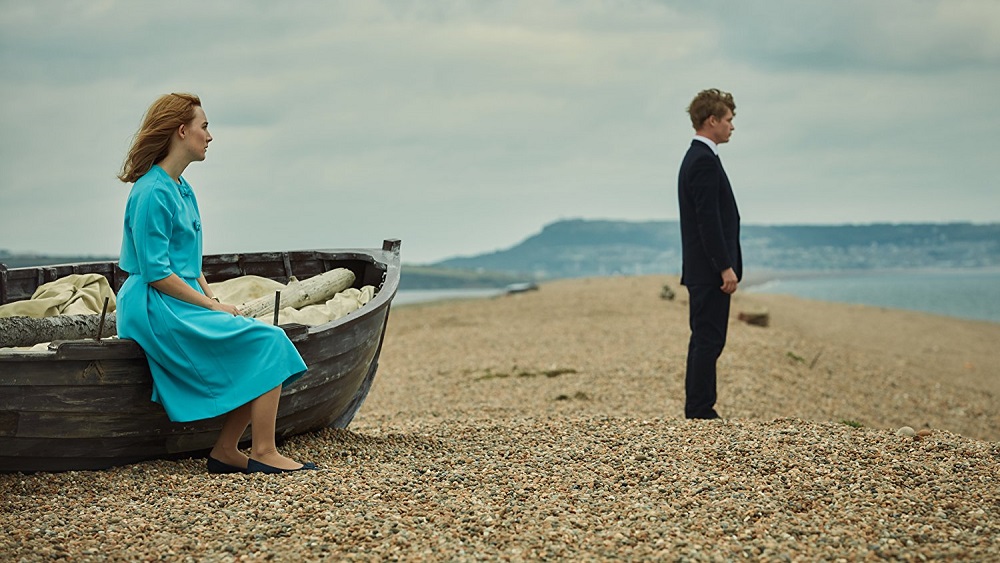 Florence Ponting (Saoirse Ronan) is in love with Edward Mayhew (Billy Howle) and the feeling is beyond mutual. It is 1962 and these two are right on the cusp of leaving school and heading out into the world overflowing with wide-eyed enthusiasm as to what the future might hold. The sky is the limit, and their getting married was an obvious must, Florence and Edward celebrating their wedding night at a gorgeous hotel located on the shores of Chesil Beach in Dorset. 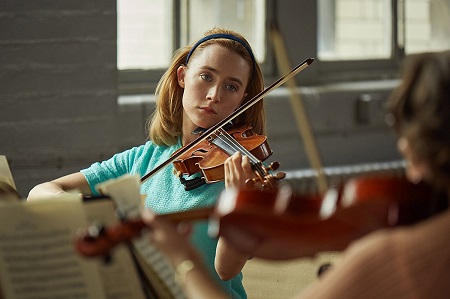 Working from a script by author Ian McEwan (Atonement) that’s adapted from his novel, “The Hollow Crown” director Dominic Cooke makes the leap to feature-length motion pictures with the romantic melodrama On Chesil Beach. For those unfamiliar with the source material (or any of McEwan’s works, for that matter), the story here does not follow along a typically beaten path. It jumps back and forth through time, Florence and Edward spending the majority of their wedding night preparing for their first evening together as man and wife while also reminiscing on what it was that led them to fall in love in the first place. It’s a meticulous examination of gender roles and relationships during the turbulent 1960s, the couple’s sexual nerves and anxieties going hand-in-hand with the overwhelming desire they’ve felt for one another since the beginning of their relationship.

Unfortunately, as intriguing as all that sounds, Cooke has trouble making any of this work. For reasons that become obvious as things go along, this drama is mostly foreplay designed to hopefully lead to a big dramatic will-they-or-won’t-they-have-sex emotional payoff. Problem is, the pacing is so turgid, and the moments at the Chesil Beach hotel so stilted, maintaining interest as to whether or not this couple is going to be able to overcome their insecurities in order to consummate their marriage isn’t all that interesting. I found myself not caring what was going to happen to the two, and honestly the only reason I kept watching all the way until the end was in large part thanks to my knowledge of the author and his works, McEwan well known for pulling the rug out from underneath the reader with some narrative sleight of hand at the most unexpected of moments.

This drama proves to be no exception to that tendency on McEwan’s part. The reflectively non-linear nature of the storytelling serves a purpose, one with a goal of providing equal parts insight into the nature of love, romance and physical attraction as it also aims to pack an emotionally devastating wallop. But as I didn’t care for Florence and Edward as a couple, because I didn’t think the connection between the two of them was as strong as I felt it needed to be, what ended up happening, not just on this wedding night but also afterwards, moved me towards a feeling of blasé disdain more than it did anything else.

Yet there are moments beauty lurking inside this story, Cooke staging a handful of sensational scenes that would pique my interest for a minute or two, my curiosity as to what greater reveal these snippets of Florence’s and Edward’s lives with their respective families might be leading to palpably undeniable. It also helped considerably that Ronan fearlessly digs into her character in ways that are uncomfortably visceral in their intense specificity. There are reasons Florence seems to have a more erotic connection to her music (she’s a talented violinist with dreams of stardom) than she does to other human beings, all of which are cleverly hinted at thanks to the three-time Oscar nominee’s performance.

I cannot say the same for Howle. The nature of Edward’s character progression is unfortunately rather trying, and while the ingrained misogyny he inadvertently exhibits after a pivotal revelation from Florence isn’t shocking, because I never felt the same emotional connection to him as I did his beloved his misery and pain as he attempts to deal with the repercussions of what has suddenly occurred never registered with me. Even so, there were a couple of moments where Howle did impress me, including a knockout of a scene in a record store that had me sit back in my chair, wipe a couple of tears from my eyes and mildly wonder what was going to happen next. But the movie frustratingly can’t build on this gobsmack of a revelation, Cooke muting the inherent emotional explosiveness of Florence and Edward’s journey to the point it disappears just at the point it needed to be building to a crescendo. 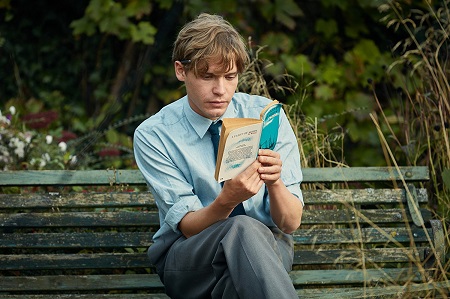 It should be noted that the film does boast a strong supporting cast which includes Emily Watson as Florence’s snooty mother Violet and Anne-Marie Duff as Edward’s flighty, brain-damaged mom Marjorie. Sadly, not a lot is made of either of them, although Duff does have one strong scene with Ronan where the pair jubilantly bond over their mutual love of art history. I’ll also say that Howle almost has a great scene with Samuel West, playing Florence’s abrasive father Geoffrey, on a tennis court, but unfortunately the sequence wears out its welcome pretty quickly, Cooke getting a little heavy-handed as he foreshadows plot twists to come.

Based on “The Hollow Crown” alone Cooke deserves the benefit of the doubt behind the camera, and his confidence with actors and his penchant to underplay instead of overplay scenes is praiseworthy. But for whatever reason, whether it be some sort of structural flaw in McEwan’s script or instead the filmmaker’s inability to zoom in on the story’s finer thematic ideas, this adaptation disappointingly comes up short. Ronan, as good as she is, shares little chemistry with Howle, while he in turn has a devil of a time making Edward someone worthy of emotional investment. On Chesil Beach might look lovely courtesy of Sean Bobbitt’s (12 Years a Slave) delicately picturesque cinematography, but as a drama of two youngsters navigating their love for one another when sexual intimacy becomes difficult this movie just didn’t cut it, my cold indifference once it came to an end a maddening turn of events to say the least. 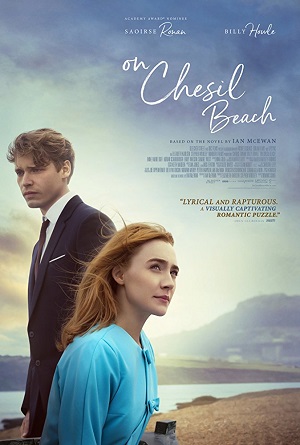