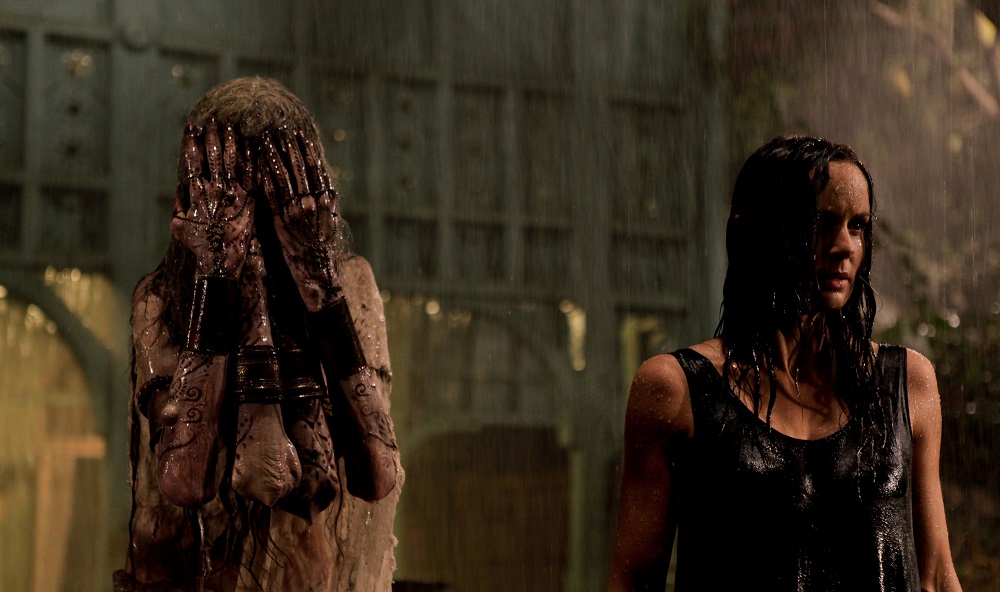 Maria (Sarah Wayne Callies) and Michael (Jeremy Sisto) are Americans living in India. They are grieving the loss of six-year-old son Oliver (Logan Creran) in a tragic car accident while doing the best they can to keep their family together for the sake of youngest child Lucy (Sofia Rosinsky). Maria is struggling, however, feeling as if her eldest’s death was her fault, and as such she’s psychologically crumbling to the point she’s considering taking her own life. 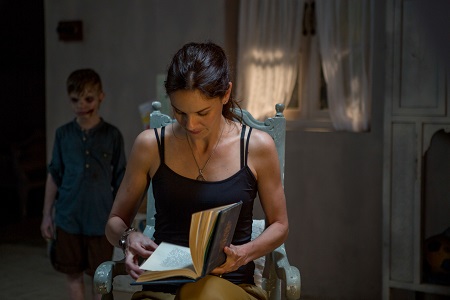 Housekeeper Piki (Suchitra Pillai-Malik) wants to help. She knows a way Maria can leave her grief behind, has a way for the ailing mother to say goodbye and let go of her grief. If she takes Oliver’s ashes to a secluded temple, if she leaves them on the steps, closes the door and waits inside, at night, he will come and speak to her, mother and son allowed one last moment to converse before his spirit steps over into the afterlife. Only thing: no matter how hard he asks, no matter how much he begs, don’t open the door, as the plain between the living and the dead must remain sealed until a new morning dawns.

If things went as planned, then The Other Side of the Door wouldn’t exist. Needless to say, Maria fails to keep the door closed, thinking she’s opened it long after Oliver’s spirit has departed. But it was all a trick, and now his ghost has returned home with her. From there the usual The Haunting meets Poltergeist tropes apply, the spirit opening doors, making friends with little Lucy and finding a way to get Maria to treat it as a living, breathing entity. Meanwhile, another paranormal force is following Oliver, its intentions as far as the living members of the Thompson family not entirely clear.

Written by director Johannes Roberts (Storage 24) and Ernest Riera, there’s not a lot that happens here that is unexpected. But it’s well made and nicely acted, especially by “The Walking Dead” veteran Callies and cute-as-a-button youngster Rosinsky. The film is also elegantly shot by frequent Alexandre Aja collaborator (who produces here) Maxime Alexandre (The Hills Have Eyes, Mirrors), while Joseph Bishara’s score might just be the Insidious and The Conjuring composer’s best work yet. There’s plenty to like, and as straightforward and as obvious as many of the narrative elements were I still found myself intrigued to see how the film was going to deal with many of its more nebulous supernatural tangents.

But the movie is achingly by-the-numbers, so much so that, even with the filmmaking elegance, tension or suspense are in something of a short supply. Considering the subject matter and the genre, this isn’t exactly a small problem. Even more egregious, the movie subverts its own mythology with a pivotal third act twist that only seems to happen so that Roberts and Riera can end things on a supposedly chilling note. Not only is what transpires unintentionally laughable, it also brings to mind a number of better, in some cases classic, thrillers that The Other Side of the Door has no business drawing comparisons to. Last scene is an easy out that anyone with half-a-brain will see coming from a  mile away, making the climactic seconds more worthy of a couple solid eye rolls than anything close to a terrified shriek. 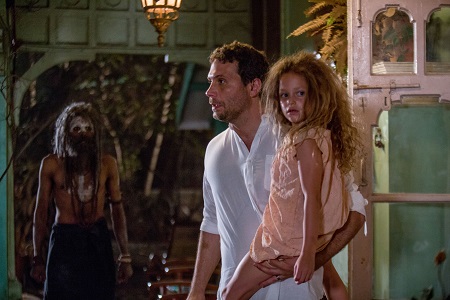 I’m not sure what to make of Roberts, yet. His SyFy Channel creature-feature Roadkill was silly but also surprisingly entertaining, its cutthroat nature showing him to a be a director unafraid to throw a punch some in the viewing audience might potentially find unconscionable. Even better was his British alien invasion meets Assault on Precinct 13 survival flick Storage 24, and while that film wasn’t much more than an earthbound Alien clone, it was so handsomely mounted and nicely acted I was willing to cut it a fair amount of slack lack of originality be damned.

With The Other Side of the Door, I got the feeling that Roberts was hoping to move into Mario Bava meets William Friedkin territory. Thing is, he can’t keep control of the material in the same way they both typically did, allowing the clichés and the melodramatic familiarity the screenplay sadly revels in during the third act to erode much of the goodwill generated by the first two-thirds of the motion picture. But the acting is strong, as are the technical facets, and I do appreciate the fact Roberts would rather scare with genuine emotional complexities and not a bunch of silly, slight-of-hand jump scares. All of which makes him a genre filmmaker I’m keen to keep my eye on, and even if this effort isn’t quite up to snuff I still feel like he’s got a picture in him that potentially will be. 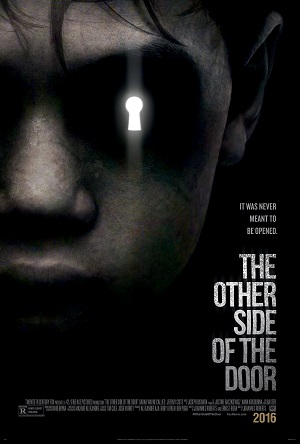