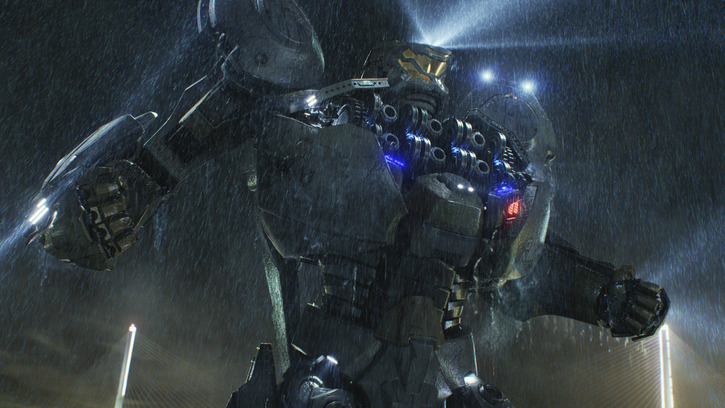 Describing the events of Pacific Rim is an act of futility. Just thinking about what goes on and why makes me grin like a madwoman who’s taken far too many drugs, realizing that a Hollywood studio has actually given wild card genre auteur Guillermo del Toro (Pan’s Labyrinth, Hellboy) something close to $200-million to craft a spectacle involving gigantic marauding Godzilla-like creatures facing off against Japanese anime-style 25-story human piloted robots such an absurd proposition the fact it’s actually come to pass is somewhat surreal. 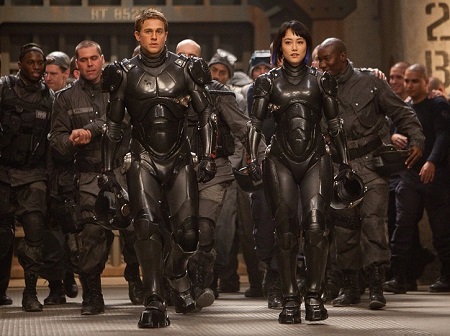 Granted, if you’re going to hand over a production like this to someone you could pick worse candidates. Truth is, del Toro is perfect for this project, his giddy fan boy enthusiasm mixed with his obsessive genre knowledge apparent in each and every frame. More, spectacle, while essential, while on display within this massive epic in spades, isn’t of central import and this director knows that, the filmmaker going out of his way to make sure the human element remains front and center throughout allowing audiences to make an emotional connection ensuring all the larger-than-life elements resonate start to finish.

That doesn’t make any of this any less silly. The whole scenario revolves around a 15-year (give or take a couple of years) war between humanity and a nasty otherworldly species invading our world through a deep sea portal located in the frigid depths of the Pacific Ocean. The monsters, dubbed Kaiju, Japanese for ‘giant beast,’ seemingly only exist to pummel and destroy, leveling city after city no matter what form of opposition the nations of the world attempt to send their way.

Things change with the development of said robots, called Jaeger, German for ‘hunter,’ massive fighting machines piloted by two drivers their brains linked together via a neural net, otherwise known as ‘The Drift,’ allowing them to function as a single unit against a previously unstoppable foe. But with each defeat the Kaiju grow bigger and stronger, each beast ascending through the portal seemingly learning from their previous brethren’s mistakes making them increasingly difficult to kill. It’s as if they’re all connected somehow, maybe in the same fashion as the soldiers piloting the Jaegers are, their ultimate goal maybe not as destructively cut and dry as the politicians in charge of shepherding the protection of the human race would like to believe.

There is more to it, of course, but to reveal any of these particularly twists and turns would ruin all the fun. Safe to say, del Toro, co-writing the script with Travis Beacham (Clash of the Titans), doesn’t allow all this bizarre lunacy to overwhelm the proceedings, keeping things grounded in a human story of forgiveness, heroism, selflessness and sacrifice easy for viewers of every shape, stripe, culture and age to relate to. He keeps the Jaeger pilots at the forefront, allows moments of warmth and humor to permeate the chaos, and while none of what’s happening is even slightly believable it still remains consistently entertaining nonetheless.

Things can get heavy-handed. The narrative revels in Armageddon genre clichés on more than one occasion, while the macho posturing and didactic speechifying can get old. At the same time, del Toro has a knack for making this kind of stuff click in ways it should not, so when we see images of a timid little girl watching the monster that killed her parents get smacked down by a robotic champion seemingly rising from the ashes of defeat to extend its arms in victory the effect is suitably affecting.

It helps that he’s assembled a strong international cast. Charlie Hunnam is the focal point, the “Sons of Anarchy” star headlining as a former Jaeger pilot who after an unspeakable tragedy left for civilian normalcy only to be brought back into the fold as the climactic battle for planetary dominance draws near. Academy-Award nominee Rinko Kikuchi is the driven rookie who could be tasked to join him in the cockpit of a refurbished Jaeger ready to be put back out onto the battlefield, while the always great Idris Elba is the impassioned commander of this robotic protection force who knows the final hours are drawing nigh. Charlie Day and Burn Gorman are a pair or rival scientists intent on proving their theories regarding the Kaiju are the correct ones, each giving their potentially tiresome characters (they each exist basically to explain what’s going on) an inspirational idiosyncratic twist. Max Martini and Robert Kazinsky round things out as cocksure Aussie Jaeger pilots who’ve brought down more Kaiju than anyone, while del Toro regular Ron Perlman has a grand time chewing scenery as a thrifty racketeer specializing in the sale of monster remains. 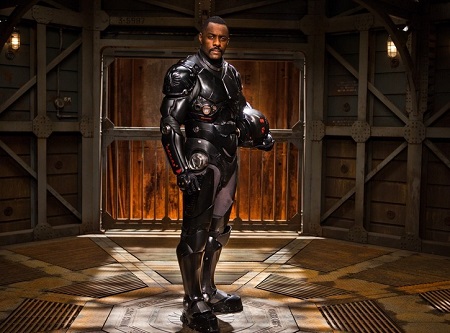 For me, what I found most interesting is just how strongly I responded to so much of this. I’ve taken films like Iron Man, Transformers, The Incredible Hulk and so many others to task time and time again for showcasing computer generated sequences that look like they could pass as cut scenes from boss battles in some video game, giving them a hard time for forgetting about the human element. Not so here as del Toro makes sure we realize lives are continually on the line even if the sequences themselves have been so obviously rendered digitally. With ingenious bits of cutting, editors Peter Amundson (Blade II) and John Gilroy (The Bourne Legacy) both at the tops of their respective games, there’s little that doesn’t have a personal undercurrent, so no matter how wildly overblown or unbelievable the images on display might be they still maintain a humanistic quality easy to relate to.

I do realize I’m waxing poetic about a movie revolving around monsters and robots duking it out for supremacy, on that point I don’t have a lot to say in rebuttal. The thing is, what do I have to rebut? The 8-year-old in me had a jolly great time watching this, but then so did the thirty-something film critic. del Toro’s enthusiasm is infectious, and in a summer filled to the brim with destruction and devastation this one feels like the only entry that understands the import of putting weight and meaning behind all the madness yet still manages to keep things fun at the same time. Pacific Rim, for all its loopy lunacy, is a heck of an entertaining roller coaster, one I image I’ll be purchasing a ticket to see again sometime soon. 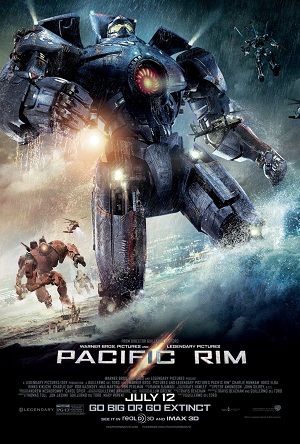