It’s been ten years since heroic Jaeger Marshal Stacker Pentecost (Idris Elba) sacrificed himself to close the Breach underneath the Pacific Ocean and stop the monstrous Kaiju coming through to destroy humanity. Now his son, Jake Pentecost (John Boyega), a former Jaeger pilot who has recently run afoul of the law and brought back into Pan Pacific Defense Corps (PPDC) service thanks to the intervention of his adopted, Kaiju fighting war hero sister Mako Mori (Rinko Kikuchi), finds himself forced to lead a group of untested cadets in a new battle to save the Earth. He and his former Gipsy Danger co-pilot Nate Lambert (Scott Eastwood) will have to train them to be hardened Jaeger warriors faster than expected, a new Kaiju threat suddenly emerging as if out of nowhere.

There’s more plot, but I’m just not in the mood to go into it right now. Just know that the giant monsters have returned and humanity’s last line of defense once again are the giant robots they’ve manufactured to stop them, a bunch of kids quickly pressed into service when all of the adult pilots, save Jake and Nate, all end up dead. There are other various subplots , the major one involving a cybernetics company run by the domineering Liwen Shao (Tian Jing) who wants to replace human Jaeger pilots with drones, while another concerns the ongoing Mutt and Jeff relationship between scientists Dr. Newton Geiszler (Charlie Day) and Dr. Hermann Gottlieb (Burn Gorman), but neither holds a candle to the central conflict. Big Monsters. Big Robots. They battle. That’s honestly all any potential viewer needs to know.

I can’t say I was euphoric in my praise for Guillermo del Toro’s 2013 opus Pacific Rim, the film a loving, over the top homage to Japanese classics like Godzilla and Mothra, but I still enjoyed it a fair amount. There was so much joy in that motion picture, so much creative effervescence, del Toro making it easy to cut his undeniably silly film a substantial amount of slack mainly because it was just so much unabashed fun to watch. It had energy and pizzazz, a sense of cinematic style that was at various times eye-popping in its playful virtuosity. While a long way from the likes of Pan’s Labyrinth, The Devil’s Backbone or last year’s Best Picture-winning The Shape of Water, del Toro’s film still had an energetic spark I responded to, and as such it holds a comfortable place in my heart I don’t foresee it vacating anytime soon.

Returning only as a producer and in a position billed as “visual consultant” in the end credits, sequel Pacific Rim: Uprising isn’t nearly as much fun to sit through as its predecessor was. While certainly not without its moments, even with four credited screenwriters the second chapter in the Kaiju versus Jaeger story still comes across as unfocused, slapdash and more than a little silly (and not in a good way). It’s oftentimes dramatically inert to the point even the death of a key character provoked little more than a yawn out of me, and by the time it was over and the inevitable post-credits stinger teased the potential for a third motion picture I was so oddly bored by it all it’s a wonder I hadn’t fallen asleep.

I will say that new director Steven S. DeKnight, a television veteran who has worked on “Buffy the Vampire Slayer,” “Angel” and the first season of “Daredevil,” does a nice job of making sure his debut motion picture doesn’t itself too seriously, adding a number of diverting comedic moments with a relaxed subtly that’s rather nice. He also stages one stunning battle between Gipsy Danger and mysterious, anonymous rival Jaeger in the middle of a frozen wilderness that’s spectacular, tension and suspense building throughout the sequence in a way that’s pleasantly effective.

The other thing that is nice about the sequel is Boyega. After making an instant impression in 2011’s Attack the Block and moving quickly on to charismatically portray Stormtrooper-turned-Resistance-leader-Finn in both Star Wars: The Force Awakens and Star Wars: The Last Jedi, not to mention also delivering a devastating performance in Kathryn Bigelow’s viscerally unsettling Detroit just last year, DeKnight makes the exact right decision to keep him front and center throughout his film no matter what might be happening in the story at any one given time. He’s a bona fide movie star, having so much fun amidst all of the cacophonous nonsense he almost makes purchasing a matinee ticket to give this sequel a look worthwhile. Boyega is terrific, and if this movie ends up being something a surprise hit make no mistake it will be in large part all thanks to him.

I can’t say those are the only positives I can come up with to say about Pacific Rim: Uprising, the most notable one spotlighting the ebullient impression young newcomer Cailee Spaeny manages to make even though her character is hardly all that memorable. But this sequel just doesn’t do anything worth talking about in any sort of detail, and there are a number of instances where I started to wonder if all involved were just making things up as they went along. Even with the fate of the world dangling precipitously from the metal fingers of Gipsy Danger’s sword-wielding hands, I just didn’t care about almost anything that was happening. Kaijus and Jaegers might be back fighting but that didn’t mean I felt anything sitting in the theatre watching them wrestle for supremacy, the end result a hopelessly dull battle royale that left me sadly dissatisfied. 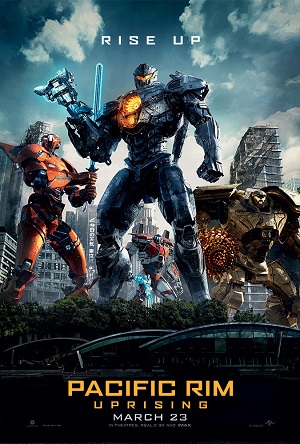