Michael Bay’s Pain & Gain is a mess. An attempt at something different for the Transformers and Armageddon hit maker, the movie is a wannabe Coen-like mélange of fact, fiction, satire, comedy and commentary that never takes shape like I kept hoping it would. Running an obscenely long 130 minutes, consisting of a series of nonsensical voiceovers and asides that keep calling attention to the fact the film is never the sum of its conflictingly antagonizing parts, the whole thing plays like a ‘90s era music video attempting to say something serious but failing to at every turn. It’s a waste of time, yes, but far more frustratingly it did not have to be, the nasty bit of true life criminal noir at the heart of the tale a story worthy of being told, apparently just not by Bay. 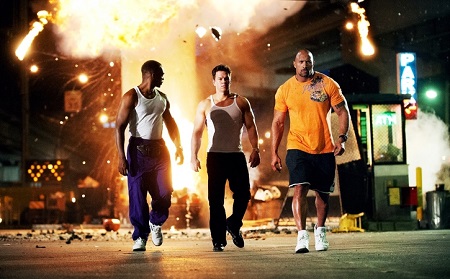 Daniel Lugo (Mark Wahlberg) is a fitness-obsessed personal trainer living in Miami striving for his version of the American Dream. He hatches a half-baked plan to abduct one of his clients, Columbian-American sandwich titan Victor Kershaw (Tony Shalhoub), and to hold him captive until he signs his fortune over to him, bringing best friend Adrian Doorbal (Anthony Mackie) and ex-con Paul Doyle (Dwayne Johnson) into the mix to help him do it. While things initially do not go as planned, eventually the trio manages to get their hands on their target, and after weeks of humiliation and abuse he eventually signs over all of his wealth to them.

Things get even more crazy from there, retired police detective Ed DuBois (a terrific Ed Harris) finding himself in the middle of the case even if he’s not altogether certain everything being explained to him by his angrily frazzled client did in fact take place. Athletic club John Mese (Rob Corddry) ends up inadvertently getting in on the crime, while Miami playboy Frank Griga (Michael Rispoli) and his bubbly girlfriend Krisztina Furton (Keili Lefkovitz) somehow find themselves in the trio’s crosshairs after the money earned during their initial crime begins to run dry. Also involved? A Russian stripper (Bar Paly) with stars in her eyes and an outspoken nurse (Rebel Wilson) who falls for Adrian even though steroids have left him sexually stunted.

It’s a mess of murder, mayhem and mystery, all of it so extraordinarily silly the fact the majority of it is true is a head-scratching shock. Problem is, Bay isn’t the guy to bring this to the screen, the way he obliterates and pounds Christopher Markus (Captain America: The First Avenger) and Stephen McFeely’s (You Kill Me) – the pair working from a series of magazine articles by Pete Collins – script into submission borderline intolerable. While some of the director’s signature editorial flourishes are kept moderately in check, by and large he handles the proceedings with all the subtly of a right hook to the face, and as such any chance the plot has to resonate or for its commentary to ring with any sort of truth borders on nil.

Pity, because I do mean it when I say there is a good movie sitting in the middle of Pain & Gain aching to be let out. The story has all the hallmarks of being the next Fargo, maybe even the next In Cold Blood, the freaky stupidity of Lugo’s plans coupled with the fact he almost managed to get away with it all saying more about law enforcement and the pursuit of a better life by the average working class schmuck than I’m sure most will be comfortable with. In some ways, one could image this becoming an almost essential double-feature with Harmony Korine’s Spring Breakers, the two both depicting a Floridian dreamscape of sex, sin and sensuality that slowly and uncontrollably devolves into aberrant nightmare.

But where that movie always felt in control, always had direction, always contained the essence of an idea it’s director confidently felt capable of pursuing, this movie is all over the map, shifting uneasily from comedy to drama to action to thriller to I don’t know what the heck it all is seemingly at the drop of the hat. The simple fact is that spending time with Lugo, Doorbal and Doyle is about as enjoyable as having one’s teeth pulled with a pair of rusty pliers, and just about as edifying, too.

Look, I respect that Bay wanted to expand his horizons, wanted to go in a new direction and leave the histrionics of his filmography behind. Problem is, his approach to the material is the same that he took when crafting Pearl Harbor or Bad Boys, the histrionic level so high the result is borderline earsplitting. There’s nothing of merit to take away from Pain & Gain other than the fact that maybe in the hands of a different filmmaker something worthwhile could have been crafted, this pile of bombast as instantly forgettable, and in some ways lamentable, as anything I’m likely to see in all of 2013. 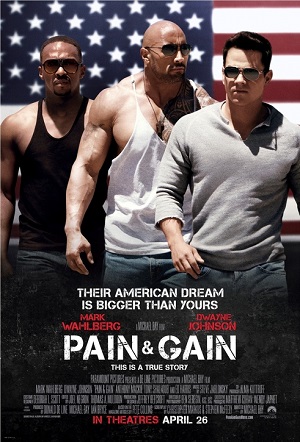