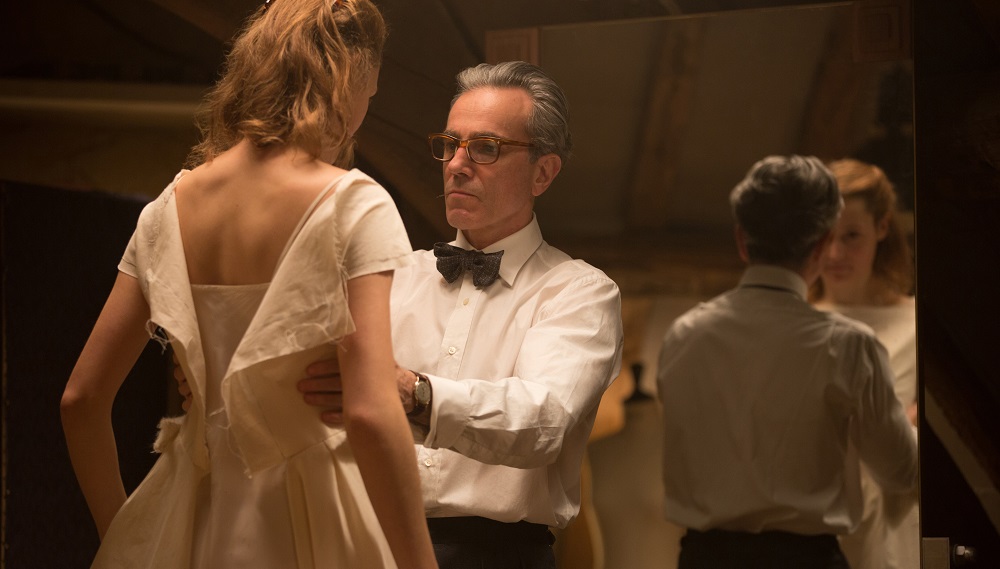 Reynolds Woodcock (Daniel Day-Lewis) is one of the finest fashion designers of his day. It is 1955 and London is still attempting to rebuild after the carnage of WWII. But this has not kept countesses, heiresses, movie stars and royal princesses from all over the globe from flocking to his doorstep to be dressed in one of his gowns. Fussy and fastidious, he feels everything as it pertains to each client’s wants, desires and dreams, and as such the artistic mental strain he’s always under makes it difficult for anyone other than his sister and business manager Cyril (Lesley Manville) to get close to him. 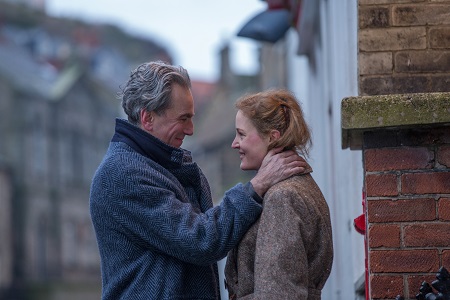 On a brief trip to the countryside to regain mental balance, Reynolds encounters Eastern European immigrant Alma (Vicky Krieps) waiting tables at a small bed and breakfast he likes to frequent while on vacation. Immediately smitten, the pair begins a curious relationship where determining who has the power at any given moment is up for continual debate. She quickly becomes an important muse for the designer, Reynolds conceiving some of his most stunning creations with her in mind. He opens her eyes to a bigger world she wasn’t sure existed after living through the horrors of the war, Alma eagerly lapping up everything this creative genius shows her, calmly determining she wants to be a part of his life for the foreseeable future whether he realizes it or not.

Paul Thomas Anderson isn’t one to make movies that are what they initially appear to be. Punch-Drunk Love, The Master, Magnolia, Boogie Nights, all of these play at being a certain type of film, all offering up the idea of a familiar narrative thread only to obliterate those notions in order to transform their respective stories into something unique, elaborate and, in most cases, profound. Reuniting with his There Will Be Blood star Day-Lewis, the same can be said for the director’s latest Hitchcockian spectacle Phantom Thread. What at first looks to be a straightforward examination of masochistic misogynistic genius run amok subtly proves to be anything but, this explosive examination of artistic imagination, intellectual hubris, sexual need, emotional impotency and familial domination an insidiously provocative drama that grabs the jugular and refuses to let go.

It’s intoxicating stuff. Utilizing Johnny Greenwood’s (Inherent Vice) score as if it were a hypnotic symphony engineered to mesmerize the audience into believing all is safe and everything is as it appears to be, showcasing visual images that feel as is if they are born straight from the viewer’s own consciousness, the spell Anderson conjures gets under the skin right away. Like a Kubrickian dream slowly transforming into a nightmare only to transmogrify into something even more profound, Reynolds’ story is as linked to Cyril’s as it is to Alma’s as the two women see theirs unquestionably connected back to him. It’s a triangle of power and control, freedom and responsibility, captivity and escape, each character in desperate need for what the others have to offer even if they don’t always want to admit that is indeed the case.

Manville, an exquisite actress arguably best known for working with Mike Leigh in films like Another Year, Topsy-Turvy, Vera Drake and Mr. Turner and a woman who has in my opinion never gotten her full due as a virtuoso talent capable of just about anything, is insanely good. Cyril, while a person of few words and an even icier stare, is maybe the most important piece of the three-person puzzle Anderson has so painstakingly constructed. Manville plays it close to the vest yet at the same time reveals nibbles of interior mechanisms that are constantly in motion, the devoted sister determined to do what she feels is best for her brother even if that means going directly against his passionately expressed wishes. Yet there is also a quiet pain here, a steady melancholy that rips the heart into pieces, the actress giving life to all of this life with a nimble, simplistically refined physicality that’s extraordinary.

Then there is Krieps. A relative newcomer who has appeared in films as diverse as Hanna, A Most Wanted Man and Anonymous, it’s impossible to overstate just how glorious her performance as Alma proves to be. This young woman initially appears like an icy siren straight out of a Hitchcock classic like Vertigo or Marnie, her haunted yet hopeful facial features so innocently beguiling it’s understandable how a driven, narcissistic workaholic like Reynolds could be so instantly enamored with her. But watch closely and one notices how Kripes’s eyes are in constant motion. She’s relentlessly taking in information, learning all she can as if she is consuming the world around her like it’s a four-course meal served on increasingly elegant silver platters. She becomes the film’s driving force, her refusal to give up control when she finds a way to grab it for herself only equal to just how willing she is to relinquish it when submission is an even more appropriate course of action to maintain domination. 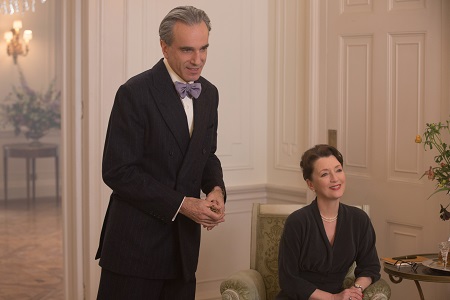 Submission. Domination. Love. Lust. Turmoil. Peace. These are the core elements that are at play, and it is Alma’s arrival into Reynolds’ minutely controlled life that causes them to explode in ways the designer isn’t initially prepared to deal with. His muse becomes his master, just as he becomes her lord, just as Cyril becomes the one facilitating their relationship, just as the creation of his exquisite gowns becomes even more creatively magnificent; it’s a crazy, spiritually astute hedge maze that conceals multiple solutions, each one more unnerving, and yet still breathtakingly rapturous, than the one sitting alongside next to it also proves to be.

Day-Lewis has said this is his last role, that with this film’s release he is retiring from acting. If this is indeed the case, Anderson has crafted for the three-time Academy Award winner a role fitting of his legendary talents. Watching him bring Reynolds Woodcock to life, seeing him inhabit this man with such grace, such magnetic radiance, it’s as pure a cinematic joy as anything I ever could have hoped for. Which is also the same thing I could say about Phantom Thread itself, this marvelously unsettling foray into the recesses of the human condition another Anderson triumph I’m sure I’ll be dissecting and marveling over for many years to come. 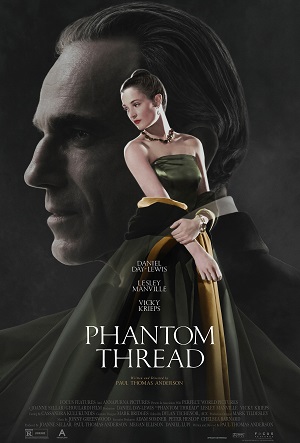