It won’t shock anyone if I admit to not being an ardent fan of Adam Sandler. It isn’t that I am against the man so much as I loathe the majority of his films. From Billy Madison to this year’s Mr. Deeds, the massive popularity of this actor’s movies has consistently eluded me.

Not that I don’t think Sandler isn’t talented. He is. He’s shown glimpses of magic, most notably in moments of spontaneous hilarity in Happy Gilmore and in scenes of touching understatement in The Wedding Singer. But overall the actor has shown a risk-averse style that goes for the easy gag seemingly every time out, wrecks like The Waterboy, Bulletproof and Little Nicky inane blots on the cinematic landscape the less said about the better.

Paul Thomas Anderson’s new endeavor Punch-Drunk Love changes everything. A glorious love letter to the golden age of cinema, Anderson’s opus is the equivalent of a jubilant Technicolor MGM romantic musical, only without the requisite singing and dancing and crossed with a stark cynicism that is Sandler’s calling card. This is one of 2002’s best motion pictures.

Barry Egan (Sandler) is a sales executive for a company that sells novelty toiletry items. He has seven sisters who incessantly goad him about everything, especially his being perpetually single and working for a company that’s destined to go nowhere. Barry desperately wants for his siblings to leave him be, and while he tries to be accommodating during family gatherings, this is only a mask shielding an inner rage that explodes to the surface at the least predictable moments.

Who could love a scarred child such this? It might be the sweetly sympathetic Lena (Emily Watson) who asks him to watch her car and later goes with Barry on a dinner date. She’s a lost soul, too, clearly seeing the hurt that’s eating away at the salesman’s soul. But Lena also sees the goodness residing within him as well, and she’s more than willing to take a shot at helping ease his pain to discover what might happen next.

Punch-Drunk Love is a spellbinding treasure. In Anderson’s world, people meet by chance and anything can happen. Just watch Hard Eight, Boogie Nights and Magnolia.That is the case here as well. Barry finds a harmonium early on in his journey, and the instrument serves no real purpose other than to be a conversation piece and an outlet for his aggressions. But it becomes far more than a symbol for this man’s discombobulated psyche, discovering just how much more one of this film’s numerous indefinable joys.

Wearing a perfectly tailored electric blue suit – inspired by a similar outfit worn by Fred Astaire in Vincent Minnelli’s classic The Band Wagon – Sandler fits comfortably inside Barry’s imperfect world. This is the first character who makes full use out of Sandler’s gift for comic tragedy. It is as if the grace of Buster Keaton has given way to the whimsical bathos of French filmmaker Bertrand Blier, and the combination is astonishing.

Sandler was born to portray Barry. I was mesmerized watching him explore this man’s inner demons. In the majority of his comedies, Sandler has only hinted at exploring the internalized anger and terror that so many of his characters are experiencing. For the first time, that rage is allowed to blossom and mature until it grows into something poignantly brilliant. Barry’s explosions are sudden and uncompromising, his final outburst a jolt of rage that’s overflowing in heartbreaking anguish.

There’s a subplot involving Philip Seymour Hoffman, an obnoxious phone sex operator and four brain-dead brothers that doesn’t initially seem like it is going anywhere. The glory is in watching Anderson ties all these seemingly disconnected plot strands together while reaching for something excitingly original.

Will Sandler take more chances like this going forward? I hope so. Anderson has found a way to utilize the actor in a manner that taps into his abilities like no other filmmaker has so far been able to do. Punch-Drunk Love is Sandler’s finest hour. Here’s hoping he has more of them in the future. 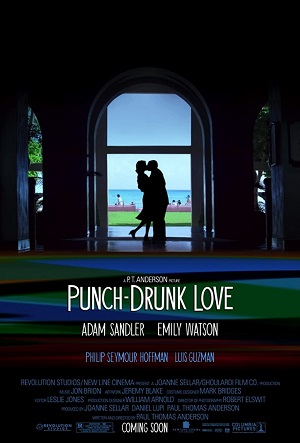