Now out of college, the a cappella-loving women who used to make up the award-winning Barden Bellas are struggling to find themselves out in the big, bad world. Their talented ringleader Beca (Anna Kendrick) has just quit her job as a music producer. Aimless Amy (Rebel Wilson) is living her life as flippantly as ever. Chloe (Brittany Snow) is a nervous wreck waiting to learn whether or not she’s gotten into veterinary school. Aubrey (Anna Camp) is considering a career change. Heck, all of the Bellas, Cynthia (Ester Dean), Lilly (Hana Mae Lee), Flo (Chrissie Fit), Jessica (Kelley Jakle) and Ashley (Shelley Regner) included, are currently floundering. Only happy-go-lucky Stacie (Alexis Knapp) appears to have any direction, the young woman excitedly anticipating the birth of her first child. 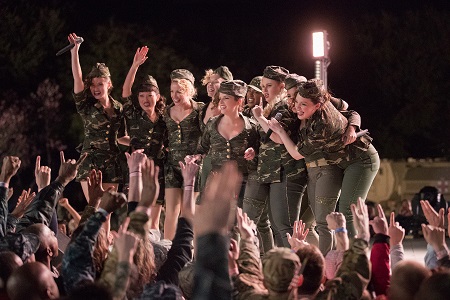 After reuniting to watch a performance of the current Barden Bellas led by Beca’s former wide-eyed protégé Emily (Hailee Steinfeld), Aubrey has an amazing idea. Her incarnation of the Bellas, the ones led by her, Chloe and Beca, they should all reunite for one last hurrah, and as her father is a high-ranking military officer she’s positive she can get them signed on to a current USO tour traveling through Spain and France. With all of the young ladies interested, and with Emily agreeing to fill in for Stacie, the group heads to Europe. Once there, they learn that the four acts scheduled to perform for the troops will also be competing for a spot opening for DJ Khaled on an upcoming tour. With nothing to lose and everything to gain, the Bellas are once again are determined to put on an amazing show, these a cappella titans eager to prove they still have what it takes to sing with the best of them.

It’s hard to know what to make of Pitch Perfect 3. The movie understandably plays like a farewell tour, returning writer Kay Cannon’s script not exactly going out of its way to change up the tune. Collaborating on the sequel with Beatriz at Dinner and Year of the Dog impresario Mike White, the film isn’t invested in its own scenario. If anything, Cannon and White seem must have been bored by the prospect of setting up another competition for the women to be a part of. Instead, they choose to focus on the relationships the Bellas have formed since the original Pitch Perfect, doing their best to give each character a moment to stand out, all in attempt to give each woman a little more dimensionality than they’ve maybe been allowed to exhibit in either of the prior motion pictures.

Not that it works. There is a haphazard, devil-may-care élan to events that sometimes lead me to believe Cannon, Kay and director Trish Sie (Step Up All In) were making things up as they were filming. Even what appear to be major subplots, most notably one involving Amy’s estranged thief father Fergus (portrayed by a game John Lithgow) appearing seemingly out of nowhere to mysteriously reunite with his daughter, add up to practically zero, delivering very little that’s substantive no matter how game each of the various cast members might appear to be. I also can’t say Beca’s interactions with a DJ Khaled music producer named Theo (Guy Burnet) go anyplace unexpected, and while I like how the film takes her journey to its logical conclusion, things get there with all the sizzle and spice of an undercooked slice of Spam marinating in low-calorie mayonnaise.

And yet, call me crazy but Pitch Perfect 3 made me laugh. More importantly, it got me to smile. The Bellas aren’t played as jokes. Even when they mess something up, their performances are still professional each and every time out. At this point, these women are pros, and while their various personal lives might be in shambles, once they hit the stage they know how to put on an audience-friendly show better than just about anyone else. I really liked how much respect the filmmakers were giving them. No pointless crotch shots mooning the President of the United States. No reliance on gross-out humor to generate a cheap laugh. Other than one obnoxious bit of chaos these women have grown up. They know how to take care of themselves as well as how to look out for those they hold dear, everything adding together to help give the sequel a layer of restraint that’s moderately surprising. 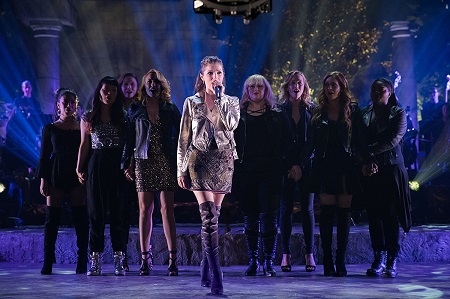 Cannon could have given the rival bands more to do, especially the all-girl rock group calling themselves Evermoist led by a suitably sneering, high-energy Ruby Rose. I’m also not sure why Steinfeld, the only actual bona fide pop star in the movie, decided to return, her character introduced in Pitch Perfect 2 mostly relegated to the background save for the opening number. There’s also no certainty that this capper to the trilogy will be anywhere near as pleasantly re-watchable as the 2012 first film has proven to be, and as such I can’t say that my initial reaction will hold when I give this one a second look at some unknown point in the future.

Nevertheless, I had far more fun sitting in the theatre watching this sequel than I should probably admit. Don’t get me wrong. A third act twist sends thing into James Bond meets Mission: Impossible territory, and it’s easily as silly as it sounds. Yet Kendrick, Wilson, Camp, Snow and all the rest of the actresses never allow things to descend into a state of cartoonish tomfoolery, and as bizarrely nonsensical as this subplot proves to be there’s still a layer of charm I found pleasing. I also really liked the closing musical number quite a little bit, and if Pitch Perfect 3 ends up being the Bellas’ a cappella swan song, for my part I can’t help but feel the entire group goes out on something of a satisfying high note. 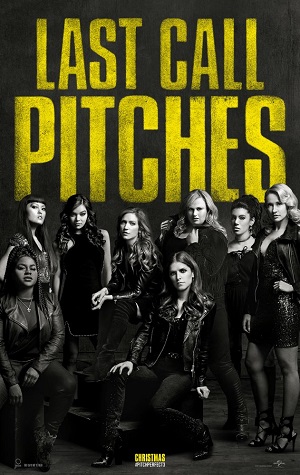