Geologist Kristian Eikjord (Kristoffer Joner) has retreated back to his isolated mountain home in Geiranger, and even though he’s considered a hero throughout Norway and is responsible for saving thousands of lives after a catastrophic tidal wave struck his community, personally he is still psychologically traumatized by what happened. While his wife Idun Karlsen (Ane Dahl Torp) has been able to get on with her life, moving with their children Sondre (Jonas Hoff Oftebro) and Julia (Edith Haagenrud-Sande) to Oslo, Kristian is still stranded in the past. Even a weekend visit from his daughter isn’t enough to get him out of a borderline agoraphobic stupor, the geologist sadly sending Julia back to her mother less than 24 hours after she arrived in Geiranger to visit him. 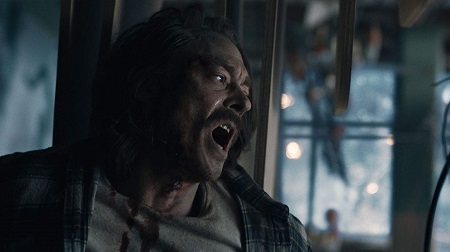 Not too long after she returns home, Kristian receives a mysterious package from a fellow scientist containing intriguing notes and statistics regarding Norway’s recent seismic history. It’s unsettling enough to push the reclusive geologist to head to Oslo to speak with him. But when he gets there, Kristian learns that the man journeyed to see is dead, crushed in a mysterious collapse while examining the Oslofjord tunnel. Teaming up with his grieving daughter Marit (Kathrine Thorborg Johansen) to investigate this tragedy in greater detail while also attempting at the same time to reunite with Idun, Sondre and an understandably still angry Julia, it quickly becomes apparent something strange is happening beneath the streets of the city. For the first time since the catastrophic earthquake of 1904, Norway is going to rumble and tumble like it never has before, and Kristian will do whatever he has to in order to ensure his loved ones survive the chaos and carnage that’s all but certain to transpire.

A sequel to Roar Uthaug’s 2015 international smash The Wave (Norway’s Best Foreign Language Film submission for that year), I can’t say the idea of continuing the Eikjord family’s story in The Quake sounded like the best idea in the world. I mean, sequels to popular disaster movies don’t exactly have a great track record (Beyond the Poseidon Adventure, anyone?), and even with the original cast returning it didn’t seem likely the film could rise to the same sort of rapturous heights its predecessor ascended to. Yet new director John Andreas Andersen (a veteran cinematographer known for shooting thrillers like Headhunters and King of Devil’s Island) and returning screenwriters Harald Rosenløw Eeg and John Kåre Raake do a fine job of continuing this story. Once again they keep things centered on the characters and their relationships. While the looming disaster is undeniably massive, the human component the audience is asked to focus on is kept purposefully small, thus allowing the inherent emotion of the resultant calamity to hit home with an even greater impact.

I really liked Joner in this. Seeing Kristian reduced to being such a shell of the confident and determined go-getter that he was previously was an unexpected punch to the gut, the actor showcasing the geologist’s crippling PTSD with a raw nakedness that’s unflinching in its intense specificity. Joner isn’t afraid of allowing his character to do and say some truly horrendous things almost as if he is daring the audience to turn their back on him. But because he does this Kristian’s redemptive arc becomes all the more invigorating to witness, the fact he’s so ready to jump back right into the center of unimaginable carnage in order to save his family and to protect countless strangers making him an easy hero to root for.

Johansen is also a fine addition, Marit uncertain just how heartbroken she’s supposed to be for a father she never got the opportunity to know near as well as she would have liked to. Her growing awareness that he cared for her far more than she realized, more than what he was ever able to put into words, is surprisingly affecting, making her own third act heroism after the earthquake strikes all the more compelling. Johansen makes Marit’s daring-do atop a crumbling luxury hotel skyscraper come from a place of selflessness born from a new understanding of the parent who was only recently lost to her, and because of that I had a hefty emotional stake in her character’s survival.

An entire subplot devoted to Sondre attending college classes with a new girlfriend goes nowhere, his separation from the rest of his family treated more as a requisite afterthought than it was a core element of the story. There is also a level of Irwin Allen-like sadism at moments this time around that did not exist in The Wave, its cliché ugly presence disconcerting to say the least. In particular, Andersen stages an elongated set piece inside a crumbling elevator shaft that’s horridly exploitive, everything building to a senseless and assaultive death that almost ruined my enjoyment of the remainder of the film. While he and the screenwriter do right the ship and get their story moving back in the right direction it still isn’t like substantive damage hasn’t transpired, and I’m not so much angry that they kill off a likable character as I am at the manner in which they do it. 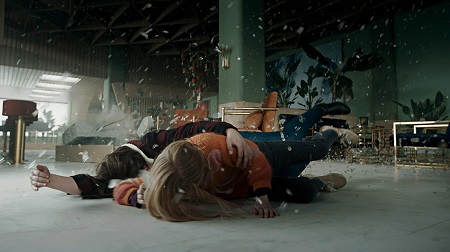 Thankfully, much like Uthaug (who would go on to helm the most recent Tomb Raider adaptation) accomplished with the first feature Andersen shows he’s assertively capable of staging scenes of mass-destruction on a relatively minimal budget (apparently something less than $10-million) with thrilling aplomb. He allows key moments to play themselves out in an elongated manner that only heightens the tension. All the set pieces atop that aforementioned luxury skyscraper are stupendous, one extended bit of action involving Kristian, Marit and Julia attempting to survive as the floor beneath them literally crumbles into nonexistence bordering on perfection.

Those few critical missteps do weigh on me, and even though it can’t really be helped the sense of déjà vu that happens as I watched Kristian once again race against time to save his family from Nature’s destructive wrath was indeed noticeably palpable. But the filmmakers again do a nice job of building characters and keeping their focus on their respective relationships, and while the titular disaster is impressive, the continued resilience of the Eikjord clan as they worked together to survive was even more so. The Quake might not shake, rattle and roll to the same extent its superb forerunner did but that doesn’t mean it also isn’t worthwhile, this bone-chilling sequel an effectively entertaining follow-up I hope fans of the first film take the time to search out and see. 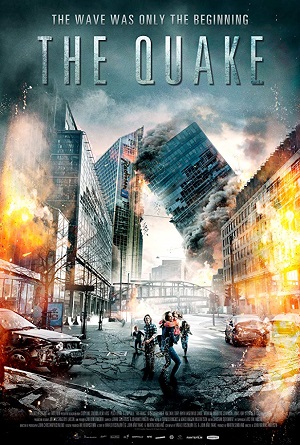