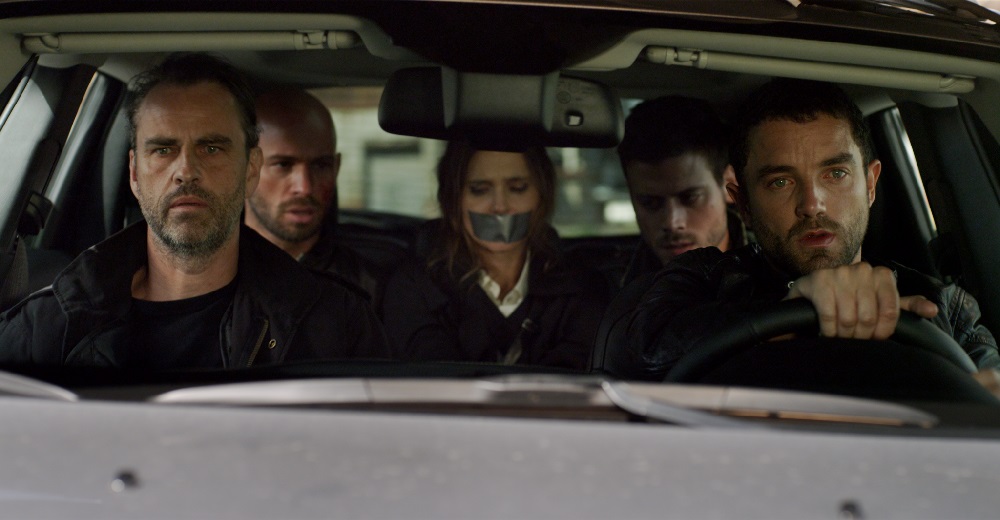 A frantic father (Lambert Wilson) is rushing to get his 4-year-old daughter to the hospital for a transplant operation when he carjacked by bank robbers Sabri (Guillaume Gouix), Vincent (François Arnaud) and Manu (Franck Gastambide). Having been forced to leave their leader (Laurent Lucas) behind with a gunshot wound to the gut, the trio snatched a random woman (Virginie Ledoyen) from a local mall as a hostage, shoving her into the car right alongside their two new prisoners. 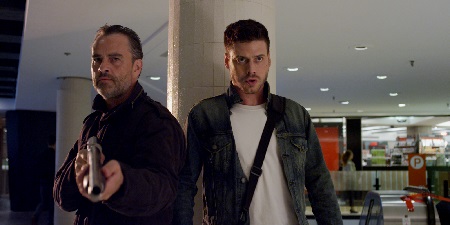 With the clock ticking and his daughter’s life hanging in the balance, this loving single parent urges his fellow female captive to show restraint, figuring if they can keep from doing anything rash this group of rogues will fracture and fall apart from within. Only then, will he make his move. Only then, will he do what he must to see that his little girl gets to the hospital and has the operation he knows will end up saving her life. Only then, will he show these psychologically crumbling bank robbers who is really in charge of this increasingly volatile situation.

Director Éric Hannezo’s debut Rabid Dogs is visceral, hard-charging remake of the fondly remembered 1974 Mario Bava thriller. Following the same general plot outline, it also updates things into the modern age, some elements of it, most notably the opening bank robbery and subsequent rampage through a crowded shopping mall, undeniably unnerving when juxtaposed against recent tragic Parisian events. This is an angry, brutally cynical movie, building to a conclusion that, while not particularly surprising, can feel like a violent slap to the face if one doesn’t see it coming beforehand.

The opening is dynamic, make no mistake. While the heist itself is not depicted, its aftermath is, Hannezo orchestrating the subsequent chaos as the four men responsible for the crime are forced to come up with a new escape plan as their original one gruesomely goes south. The mall shootout is particularly riveting, bristling with you-are-there tension that’s palpable to the point of being almost unendurable. There is a moment of macho understanding between Gouix and Lucas that speaks volumes, allowing the latter a passing glimpse of quiet, if misdirected heroism, that in its own strange way is touching. It also sets the stage for the former’s future emotional evolutions, showing insights into his character the other two members of his band cannot begin to understand.

The issue is, other than Wilson, there’s not a single person to root for or like, as even Ledoyen is left out to dry for the majority of the narrative. Which is bizarre, considering that, other than the comatose child, she’s the only character who is a complete innocent. Yet, this woman is a modest idiot, doing things and taking chances that, as far the greater scope is concerned, rarely make sense, even if one takes into account the immense pressure of the situation she’s stranded in. While the 8 Women and Farewell, My Queen actress is just fine in the role, it’s the way she is written that is the problem, making it hard to feel next to anything when push ultimately comes to shove and the kidnapped woman ends up staring death straight in the eye trying not to blink.

As for Wilson, a French cinema icon who has been nominated for six César awards during his career (France’s Oscar equivalent) including spellbinding turns in pictures as diverse as Rendez-vous, Same Old Song and Of Gods and Men, there’s a reason he’s been cast as the father. With an actor of his stature and talent in the role, it goes without saying this man is not all he appears to be, the secrets he’s hiding ones he’s determined to keep close to the vest for as long as possible. This dilutes the impact of all that happens during the climactic act, making what transpires a little more foregone than I’m sure Hannezo and his fellow screenwriters Yannick Dahan and Benjamin Rataud intend it to be.

All the same, Wilson is mesmerizing, his piercing glare cutting through things in a way I found fascinating. The way he obsesses over the child, how he finds ways to plead with his fellow kidnap victim, often without the use of any words, to abstain from taking action until he instigates it, the actor has an ability to convey so much while doing precious little. It’s an extraordinarily complex turn, one that hints at eerie, unsettling depths that are thankfully never fully explored making them all the more mysterious, Wilson so good I’d almost be curious to see an entire film revolving around his character alone.

I’m not sure that’s enough. There is an inherent ugliness I couldn’t help but find distasteful. It honestly drove me a little nuts, especially considering I had the primary tricks Hannezo and company had up their sleeves pegged long before they were prepared to unleash them. Even being unfamiliar with Bava’s acclaimed original, there was never a point where I felt like anything surprising was about to take place. While there are some eye-opening moments, not the least of which is a foray into a small town that looks like they’re in the midst of a May Day celebration straight out of The Wicker Man, there simply are not enough of them, maintaining interest in this version of Rabid Dogs all the way to the end far more difficult than it ought to be. 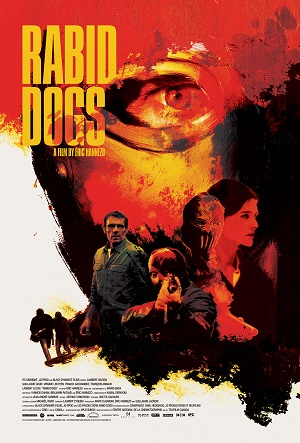