There is a space between the echoes, a calm serenity, filmmaker Alejandro González Iñárritu (Birdman) attempts to traverse with his austere early 19th century existential revenge epic The Revenant. Set in the wilderness of an unclaimed United States, inspired by a true story no one would believe had it not actually happened, the movie is as cold and as unnerving as the snowy wilderness its characters are working to survive within. It is a hard, emotionally barren land where blood flows freely and forgiveness is hard to come by, everything building to an intimate moment of understanding between native and newcomer that speaks volumes even though nothing is spoken out loud. 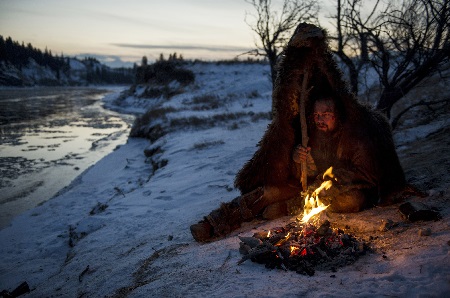 Frontiersman Hugh Glass (Leonardo DiCaprio) is guiding a large party of trappers back to the safety of a far off fort after an attack by a cutthroat band of natives kills the majority of their band. He is joined by his half-Indian son, Hawk (Forrest Goodluck), the pair responsible for not only finding the safest route back to civilization, but also for making sure the surviving members of the group don’t rip one another’s throats out on the passage there. While financier and party leader Andrew Henry (Domhnall Gleeson) is certain Glass is the right man to see them home, fellow trapper John Fitzgerald (Tom Hardy) is not, loudly proclaiming his displeasure with every step.

Out scouting the path ahead, Glass is attacked by a grizzly bear protecting her two cubs. Even though he kills the beast, he is horrifically mauled in the process. With practically no chance of surviving, Henry offers a large reward to those willing to stay with him until he passes on, tasking them to give their guide a proper burial when the time comes. Hawk, of course, stays, as does the quiet Jim Bridger (Will Poulter), the young man feeling as if they’re all beholden to Glass for getting them this far alive. But the surprise is that Fitzgerald agrees to remain as well, the violent loner doing so only because the financial boon offered by Henry for doing so is so exceptionally large.

It is from this point forward Iñárritu’s latest becomes a mournful saga of survival and revenge, Glass not dying from his wounds, instead pulling himself hand over fist toward recovery as he looks to take the lives of those he feels have wronged him the most, specifically the wild-eyed Fitzgerald. Left all alone with only a knife and the skin of the bear he miraculously killed, the veteran tracker and survivalist wills himself back to some moderate semblance of health, overcoming obstacles born of both Man and of Nature as he makes the long trek back to the fort.

Brilliantly shot by two-time Academy Award-winner Emmanuel Lubezki (Gravity) using only natural light, sensationally edited by the great Stephen Mirrione (Traffic) and stunningly scored, primarily by Oscar-winner Ryûichi Sakamoto (The Last Emperor), the movie is a visceral sensation impossible to take one’s eyes off of. Even at 156 minutes, the film moves at breakneck speed yet rarely feels unfocused or rushed, the director balancing his narrative aims throughout with consummate skill and magnetic precision. The opening massacre of the trappers is especially thrilling, sticking a lump in my throat that would remain there all the way through Glass’ encounter with the grizzly, this ingenious one-take encounter one of the finest cinematic tricks I have arguably ever seen.

Yet, for all this filmmaking virtuosity, The Revenant oftentimes feels oddly undercooked. The basic truth is, not a heck of a lot actually happens, and while I get the dreamy esotericism of what Iñárritu is going for, that does not mean I responded to any of it as fully as I would have liked to. At times the movie feels more like an homage to the works of Werner Herzog, Terrence Malick and Michael Mann than it does its own distinct, uniquely defined animal, and as such I never disappeared inside the narrative. Fleeting moments of dreamy fantasy did not work for me; neither did ponderous flashbacks of Glass and Hawk surviving a cavalry attack, these scenes hitting a slightly pretentious note in my opinion, one that left me moderately cold.

There’s been a lot of talk in regards to DiCaprio’s performance, the lengths he and Iñárritu went to in order to keep things as realistic as possible. And, as far as suffering for one’s art is concerned, the Titanic and The Wolf of Wall Street superstar takes it to a whole new level as far as his performance as Glass is concerned. The scars. The blood. The sweat. The frostbite. The tears. All of them feel real, DiCaprio going to great lengths to make me believe he was hanging on by a thread, precariously sitting on death’s door, refusing to say hello to the Grim Reaper until his thirst for vengeance could be quenched. Yet, as terrific as he might be, and he’s fabulous, make no mistake, there isn’t a ton of depth or complexity as far as this character is concerned, and as impressive a physical feat as his performance might be on an emotional level neither Iñárritu nor his actor seem interested in digging too far underneath the surface.

In many ways the same can be said for Hardy, and while Fitzgerald is an imposing villain, he’s also not a heck of a lot more than what he appears to be, making Glass’ pursuit of him not nearly as weighty as it could have been had the film given him just a shade more complexity. The most interesting character actually proves to be Bridger, the young man forced to make the most hellish of decisions, running the gamut of emotions as he’s rarely heroic, not quite villainous and instead remains gloriously, and tragically, human throughout the tale. Poluter is superb, a final showdown between he and Gleeson having a glorious sadness permeating through it that’s both deserving and heartbreaking, the young actor displaying remarkable depth and sensitivity every second he’s onscreen.

I cannot help but wish The Revenant was more than the sum of its undeniably glorious parts. But the emotional complexity just isn’t there, making it hard for me to care one way or the other if Glass succeeds in his desperate quest for revenge. Yet, Iñárritu’s latest is still justifiably marvelous on so many levels, dismissing it out of hand just wouldn’t be right. As a feat of filmmaking chutzpah, it’s one of 2015’s most intriguing offerings, the Academy Award-winning director proving once again he’s one of the gutsiest, more imaginative and absurdly confident auteur’s working in Hollywood today. 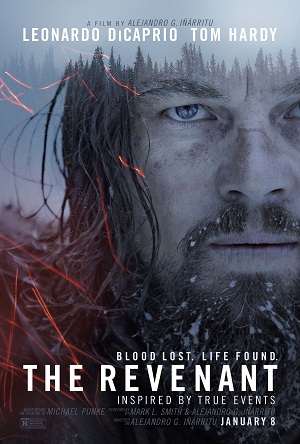