Former action icon Chin Siu-Ho has reached a dead end. His wife and child are no longer around, he’s broke, can’t get a new role and has been forced to move into a dilapidated housing project filled to the brim with all manners of washed up and hopelessly lost souls meandering senselessly through the last days of their lives. Or so he thinks.

After a suicide attempt goes all kinds of wrong, he ends up making the acquaintance of building elder statesman Yau (Anthony Chan) who also happens to be some sort of Taoist exorcist and former vampire hunter. Through him, he learns the story behind the mysterious past of a former housewife (Kara Hui) who endlessly wanders the halls looking after her strange, oddly sensitive white-haired son. He also makes friends with Auntie Mui (a superb Nina Paw), a recently widowed elderly resident whose connection to her dearly departed husband Uncle Tung (Richard Ng) is far more concrete than it probably should be. There’s also Uncle Gau (Chung Fat), a talented alchemist whose remedies and cures aren’t near as benign or as helpful as they initially appear, his true intentions potentially putting every single one of the building’s inhabitants in mortal jeopardy.

Sui-Ho is essentially playing himself in Chinese pop star-turned-actor Juno Mak’s directorial debut Rigor Mortis, the movie a deft, eerily complex homage to the actor’s 1985 Hong Kong classic Mr. Vampire. Reuniting him with members of that film’s cast (notably Chan and Fat, both coming out of retirement to play their respective parts), this ambitious nightmarish jaunt is a surrealistic exercise in metaphorical mayhem, the resulting motion picture more a treatise on death and the afterlife than it is an action-filled horror epic.

All of which is a good thing. Once you get past the fact that not a whole heck of a lot of this is going to make any sort of tangible sense, the mood and the atmosphere Mak goes out of his way to create can’t help but get to you. I felt plunged headfirst into Siu-Ho’s nightmare, walking in lockstep with him as he navigated hallways filled with all sorts of unexplainable terrors including vampires, demons, ghosts and zombies. He crafts a somber, tactile milieu that kept me completely captivated even when I hadn’t the first clue what it was that was going on, the final scenes bringing everything melodiously full circle leading to a haunting final image that chilled me to the bone.

As good as Siu-Ho is it is elder statesman Chan who steals the show. His performance is mesmerizing, beautifully layered and full of character-driven complexities that constantly evolve in entirely unexpected ways. He is the spectacular center around which everything else revolves, leaving his mark the first moment he flies into the frame ultimately cementing it with painful, wistfully realized intensity as things come to their crazily absurdist climax.

Granted, as a storyteller Mak still has a long way to go. Much of what takes place is so nondescript, so evanescent, making heads or tails of anything happening and why is borderline impossible. His film is a dreamscape with no end, no beginning and certainly no clear reason to exist in the first place, the circular, many layers of Hell meanderings more visually driven than they are dictated by character motivations or plot dynamics.

Be that as it may, I couldn’t take my eyes of this film, not for a second. Cinematographer Ng Kai-Ming (Chinese Zodiac) creates a whole series of astounding images, each of them connected in ways that are a continual surprise. Masterfully edited by David Richardson (Drug War) and scored with unsettling intensity by Nate Connelly, Mak utilizes his team’s cinematic talents with confident authority, every facet linking in direct tandem with the others in impressive fashion. Rigor Mortis is both a clever homage to Hong Kong’s luminous horror history while also a disturbingly invigorating example that its future is in good hands, Mak’s directorial debut an impressive one indeed. 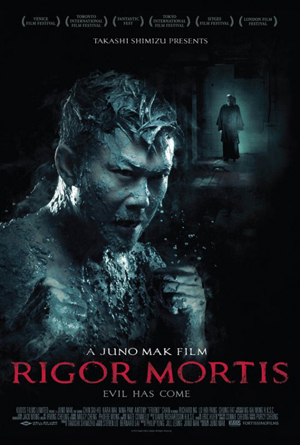