“What chance do we have? The question is what choice? Run, hide, plead for mercy, scatter your forces? You give way to an enemy this evil with this much power and you condemn the galaxy to an eternity of submission. The time to fight is now!”

“Years after she watched her mother fall and her father, military scientist Galen Erso (Mads Mikkelsen), be lead away at gunpoint by Director Orson Krennic (Ben Mendelsohn), intergalactic fugitive Jyn Erso (Felicity Jones) is stunned to learn he has sent her a clandestine message via Imperial defector Bodhi Rook (Riz Ahmed). Currently being held by violent extremist Saw Gerrera (Forest Whitaker), Jyn’s former mentor and protector before their falling out, it is suggested by Rebel commander Mon Mothma (Genevieve O’Reilly) the young woman return to the besieged planet of Jedha and discover what her father has gone to so much clandestine trouble to say.

If Disney and Lucasfilm are intent on bringing more of these types of side Star Wars stories to life, here’s hoping they follow this template in the future. With Rogue One, Edwards doesn’t attempt to redo what has come before, isn’t interested in any already established template. He and his team have crafted a film that exists inside a known universe yet still manage to plant their own idiosyncratic stamp upon it. This is a marvelous piece of entertainment, as wondrous as anything I’ve seen in 2016, and here’s my wish the powers that be allow filmmakers just as much latitude to make something great as they have done here going forward.”

I really like Rogue One. I find more to revel in and wonder at with each viewing. It’s much deeper and more profound than anticipated, this full-on war epic showcasing the possibility these promised “stories” set in the Star Wars universe offer if handled correctly. Edwards kicks things off magnificently, making this film a standalone adventure worthy of applause.

A Rogue Idea (9:00) – A look at John Knoll’s original pitch for the film and how things blossomed from there.

Jyn: The Rebel (6:16) – As the title states, a featurette with the film’s heroine front and center.

Cassian: The Spy (4:14) – The ins and outs of the Rebel spy who becomes a military hero.

K-2SO: The Droid (7:43) – How Alan Tudyk brought the film’s most indelible CG character to life.

Baze & Chirrut: Guardians of the Whills (6:20) – A short piece looking at the two Jedi Temple guardians and how they end up fighting alongside Jyn,

Bodhi & Saw: The Pilot & The Revolutionary (8:35) – Two more players fighting on the side of the Rebellion (more or less) get a featurette devoted to them.

The Empire (8:18) – A look at the various members of the Empire and the role they play inside this particular story.

Visions of Hope: The Look of Rogue One (8:24) – A nice look at the film’s superb production design.

The Princess & The Governor (5:49) – Featurette looking at the film’s most controversial aspect, mostly focusing on the digital recreation of Grand Moff Tarkin.

Rogue Connections (4:31) – Secrets, Easter Eggs and more littered throughout Rogue One are revealed.

A DVD and a Digital HD Copy of the film is included with this release.

Rogue One is a seriously great movie that stands on its own outside of the Star Wars universe while also connecting nicely with the original 1977 film it is obviously linked to. Disney’s Blu-ray presentation is immaculate, and other than the absence of the numerous deleted scenes and sequences glimpsed in the trailers (but not seen in the finished film) there’s very little in the way of “more” a fan of the motion picture could ask for. 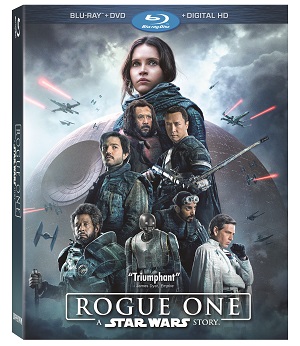