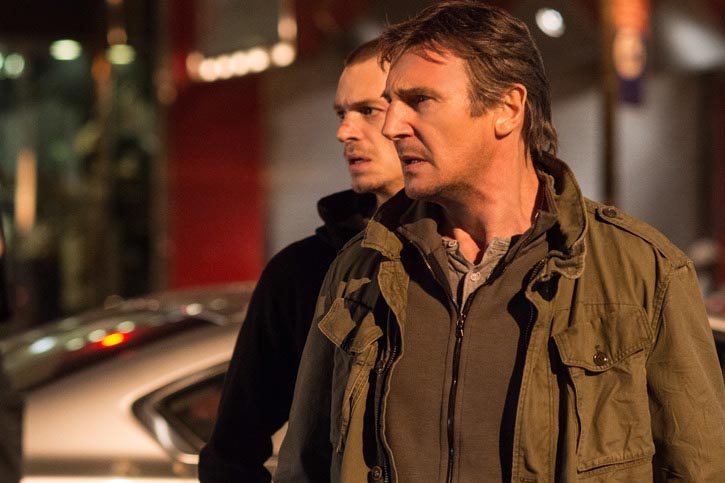 Notorious hitman Jimmy “The Gravedigger” Conlon (Liam Neeson) and revered crime boss Shawn Maguire (Ed Harris) have a long history as brothers in arms going back to their military days. They’re so close the former’s descent into alcohol-fueled self-pity isn’t enough to remove him from the latter’s good graces, both knowing that when the time comes to be judged they’ll likely be crossing the line to the Pearly Gates together hand-in-hand.

In one night, however, everything changes, Jimmy making a choice that will not only end his friendship with Shawn, but one that will put the pair at the most lethal of odds. A victim of staggeringly tragic coincidence, the enforcer’s son Mike (Joel Kinnaman), a family man who has managed to escape his father’s violent world and make a legitimate, law-abiding life all his own, witnesses a brutal murder committed by the mobster’s mentally unhinged kid Danny (Boyd Holbrook). It’s unfortunate happenstance, the former childhood acquaintances gob-smacked by the stupid dumb luck that’s befallen them.

At first sent by Shawn to ease tensions between the two young men, Jimmy is forced to kill his best friend’s boy in order to save his own son’s life. Now every gun in New York, including the majority of those carried by the police, are intent on finding the duo. With nowhere to turn, Jimmy and Mike must put their differences aside if they are going to make it to the morning alive, desperately looking for a way to escape Shawn’s wrath even if that means turning to the only honest cop, dogged Detective Harding (Vincent D’Onofrio), either of them are aware of.

If nothing else, the new thriller Run All Night features one of the strongest casts to grace a motion picture so far this year. Along with those already mentioned the film features supporting turns from the likes of Nick Nolte, Common, Bruce McGill, Holt McCallany, Genesis Rodriguez and an absolutely unrecognizable Lois Smith, most of them admittedly having precious little to do save give the film a grittier, more rugged milieu and little else. Without a doubt, it’s director Jaume Collett-Serra’s most ambitious and adult-oriented entertainment yet, the motion picture light years beyond his previous B-grade sojourns with Neeson Unknown and Non-Stop in that respect.

But as self-contained and as relatively solid as writer Brad Ingelsby’s (Out of the Furnace) script might be, for whatever reason, comma Collett-Serra presents the material in the same, flashy, giddily over-the-top manner that he has his previous works. He never allows his cast room to breathe, refuses to let anything that transpires speak for itself, instead choosing to hammer everything home with an unsubtle ferocity that’s obnoxious. The Junkie XL (Divergent) score is omnipresent, smothering emotions to the point they are relegated to bewildering irrelevancy.

One wonders what might have happened if an aging master like Michael Mann (Heat), William Friedkin (The French Connection) or even Francis Ford Coppola (The Godfather trilogy) had been given the reins or ponder how an emerging talent like J.C. Chandor (A Most Violent Year), Scott Cooper (Out of the Furnace) or David Lowery (Ain’t Them Bodies Saints) might have chosen to stage things. This is a movie that required observational restraint along the lines of what legendary auteur Sidney Lumet was known for, Run All Night existing in the same sort of Prince of the City meets Q&A moral grey areas those classics excelled at enveloping the viewer within.

Collett-Serra doesn’t seem to have the first clue as to how to achieve that sort of effect. While the various chase sequences and action scenes are suitably intense, they’re so flashy and cryptically edited, following along as to what is happening is oftentimes impossible. Heck, one escape is positively magical, Jimmy and Mike disappearing from a cement room with only one door surrounded by police almost as if both were Houdini wriggling out of a straightjacket. One second they’re trapped, the next they’re standing outside on a bridge safe from capture, no scene in-between the two included to explain how this miraculous achievement has come to pass.

As annoying as this is, it might be moderately forgivable had the director shown even a modicum of restraint during the dramatic sequences. This is not to be, however, Collett-Serra depicting conversations between adversaries, friends and family alike in the same sort of frenetic, heavy-handed fashion as he does the various shoot-outs and fist fights. While the actors do what they can – Harris, Neeson and Kinnaman particularly so – they’re all smothered by the self-indulgent bluster infused into every scene by the filmmaker, the fact any of them are able to emotionally resonate even a microscopic amount is something of a minor miracle.

Less would have been more as it pertains to Run All Night. While Ingelsby’s scenario is hardly original, it’s still strong enough that it’s easy to imagine the psychologically rewarding opus that might have been. But Collett-Serra directs as if he’s making a Non-Stop sequel and not a hard-boiled gangster melodrama where emotions run as cold as the frozen rain pelting the city’s windswept winter streets. It insults the intelligence of the viewer, while also leaving its talented cast out to dry, struggling to give audiences a reason to care, the picture nothing more than a forgettable, almost shameful failure that will undoubtedly rank as one of 2015’s most frustrating disappointments. 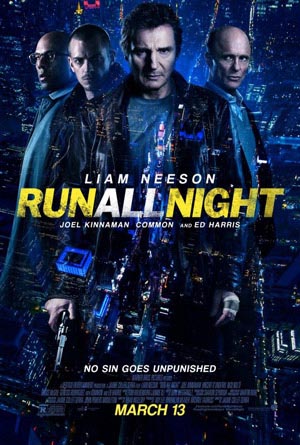