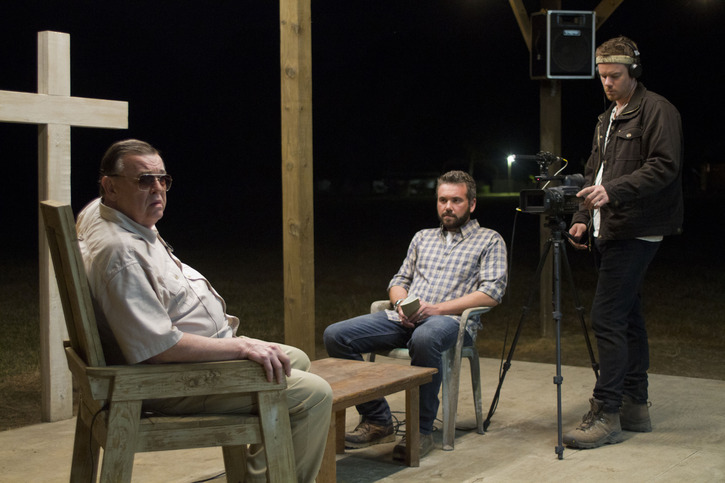 Patrick’s (Kentucker Audley) missing sister Caroline (Amy Seimetz) has resurfaced. The former addict claims to have been cured, living within a secluded community located somewhere in South America run by an apparently kindhearted religious zealot known only as “Father” (Gene Jones). Heading to the secretive compound, Patrick is joined by investigative journalist Sam (AJ Bowen) and trusted cameraman Jake (Joe Swanberg), the trio given 24 hours to document this supposed utopia in order to show the world the bliss taking place therein.

Ti West’s The Sacrament is a clear change of pace for The House of the Devil and The Innkeepers auteur, this found footage enterprise more a tragic drama of utopia gone terribly wrong than it is anything else. In fact, The Sacrament has shocks galore, showcasing how the best of intentions and the most pristine of ideals can be horrifically corrupted when dogma and paranoia take the place of common sense and measured debate. It takes ideas buried within the layers of films like Martha Marcy May Marlene and takes them to their sinister extreme, evil having no fury like a religious man scorned especially when he has the power to see his designs gruesomely fulfilled.

West takes his time getting to the point, allowing Sam, Jake and Patrick to explore the community that Caroline has been taken in by, an eerie serenity that you just know hints at something so much more ominous permeating through every conversation the trio has with any of the multicultural cult members. The film isn’t trying to frighten, isn’t trying to raise a few Goosebumps, it’s just intent on showcasing how these sorts of places can entrance and in doing so the chaos to come becomes all the more potent because of this.

Jones, the gas station proprietor who ends up making a lucky call of the coin in No Country for Old Men, is superb as Father, having a sing-song melodiousness to his cadence that’s uncomfortably enchanting. He’s like Jim Jones, David Koresh, Jerry Falwell and Rush Limbaugh rolled into a single, teddy bear-like frame, waxing poetic one second only to explode into fundamentalist outrage an instant later. He’s mesmerizing, making the most of his few scenes, and it’s absolutely clear how some could so easily fall under his spell while the rest of us sit their mouth agape utterly aghast that anyone, anywhere could take him or any of his ilk vaguely serious.

Admittedly, character development as far as the leads are concerned is hard to come by, but that has more to do with the genre and the style of the film than it does anything else. Audley comes off the worst (Seimetz blows him off the screen in their precious few scenes together, her ultimate embrace of him a ruinous body blow that left me shaken and scarred), doing what he can even if the material gives the actor precious little room to breathe or evolve.

The final act is made up of Swanberg running for his life, the cameraman in a mad dash for freedom unsure whether or not to try and save his friends or if he should go on his own and allow the chips to fall where they may. His selflessness under fire is impressive, the character the only one of the central trio that shows signs of emotional depth or interior complexity. Seen entirely through Jake’s eyes, the actor (himself an independent filmmaker of merit known for films like Drinking Buddies and the upcoming Happy Christmas) manages to do more than just look terrified, the full scope of the tragedy coming to bear as he desperately searches for Sam and Patrick in hopes of pulling them out of the fire before there’s nothing left but ashes.

West doesn’t try to make more out of the scenario then what is readily apparent, never playing up the atrocities or the horror just to gain genre brownie points. Unlike his previous two enterprises he isn’t milking things for a few scares, a fact I’m sure will catch many off guard. All of which makes The Sacrament far more devastating than it otherwise would have been, the filmmaker crafting a social and societal commentary that’s as unnervingly insightful as it is chillingly prescient. 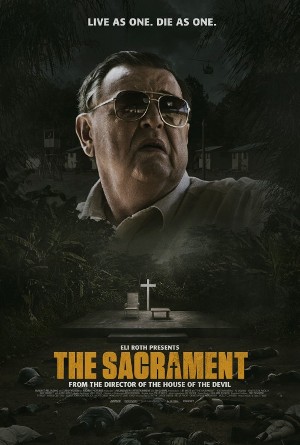