It’s hard to know exactly what to make of Lasse Hallström’s (Chocolat, My Life as a Dog) latest romantic trifle Salmon Fishing in the Yemen. Based on the novel by Paul Torday and working from a script by Oscar-winning scribe Simon Beaufoy (Slumdog Millionaire, 127 Hours), the movie is a pleasing throwback not without significant charm. At the same time it never quite knows what to completely do with itself, the climactic scenes a hodgepodge of melodramatic clichés that come perilously close to erasing all the amity generated by the first two-thirds. 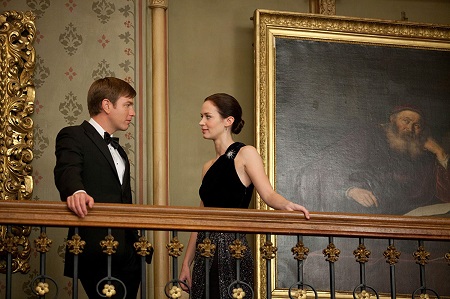 Sheikh Muhammed (Amr Waked) believes in the impossible. His love for fly-fishing has got him thinking he can export the calm serenity of the sport to his homeland right off of the Yemen, and with the new dam he’s helped supervise and fund he’s positive now is the time to discover if this dream can come true. He’s hired London public relations expert Harriet (Emily Blunt) to represent him in this matter, and she in turn contact’s fisheries expert Dr. Alfred Jones (Ewan McGregor) to get his opinions on the project’s feasibility.

At first he thinks it’s a joke, transporting British salmon to the Yemen and expecting them to spawn so that a crazy sheikh can promote a crackers dream of bringing fly-fishing to the Middle East. But when the Prime Minister’s headstrong press secretary Patricia Maxwell (Kristin Scott Thomas) gets her mitts on the idea she begs Dr. Jones to put all his efforts into making this bizarre idea a reality. From that point forward Harriet and Alfred are forced to work together towards a common, if still absurd, goal, the two professionals discovering their might be more of a connection sparking between the two of them than an outside observer would construe was strictly professional.

The movie reminded me a lot of 1990s British comedies like The Englishman Who Went Up a Hill and Came Down a Mountain, the story presented in the same freewheeling deadpan style and showcasing the same lackadaisically intoxicating spirit. The characters aren’t entirely believable and yet you can’t help but root them all on as they engage in this oddly bewitching task. I love that Beaufoy’s script doesn’t try too hard during these early sequences, doesn’t make a show of trying to call attention to all the quirks and idiosyncrasies while at the same time doing its best to give everyone three-dimensional qualities fitting their respective personalities.

But at a certain point it all gets to be a bit much. Dr. Jones is in a loveless marriage that’s falling apart while Harriet thinks she’s in love with a British soldier whom she’s only known for a short period of time and has apparently been lost somewhere in the wilds of Afghanistan. Their respective storylines, as well their own burgeoning romance, culminates in a way that doesn’t feel genuine, and whether this is a fault inherent to Torday’s novel or one that can be traced to Beaufoy’s script and/or Hallström’s direction I honestly cannot say. 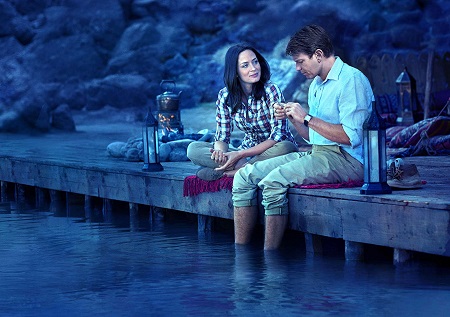 What I do know is that the last act does not work. As nicely underplayed as things have been, the syrup dripping off the screen during the climactic sections is undeniable, one thing building upon another (ethnic and religious intolerance, political grandstanding on the part of the Brits, the reemergence of a long-forgotten character) in ways that border on insulting.

I did kind of love the first two-thirds or so of the picture. McGregor and Blunt have effortless chemistry, while Waked marches through the film with an authoritative grace that’s hugely appealing. As for Thomas, she’s magnificent, and every time she comes on-screen I didn’t want her to leave, part of me wishing Hallström and Beaufoy had decided to make a movie entirely about her and left the rest of this silliness alone.

But as mixed bags go I can’t say Salmon Fishing in the Yemen is going to hold up on subsequent viewing that well. As dreamy and as enchanting as much of the film can be that last act is shockingly subpar, especially when compared to all the wonderful bits that prove to be so memorable. But the movie never swims against the current, doesn’t head upstream in an unconventional way, and as such the goodwill spawned during the initial migration frustratingly vanishes by the time this absurd romantic journey comes to its end. 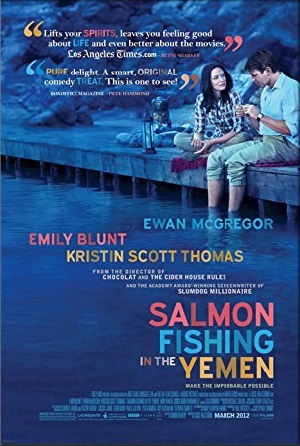