I honestly thought Scoob! was going to be more of an origin story for the team of Mystery, Inc. than it ultimately proved to be. Yes, there is a brief prologue showing how Scooby-Doo (voiced by the great Frank Welker) and Shaggy Rogers first meet, a sequence that culminates with the pair making the acquaintance of Fred Jones, Velma Dinkley and Daphne Blake while inadvertently solving their first not-so-supernatural mystery, but that’s it as far as the younger incarnations of all these classic characters are concerned.

After the timeless original theme song is over, the story shifts into the immediate present, Scooby, Shaggy (Will Forte), Frank (Zac Efron), Velma (Gina Rodriguez) and Daphne (Amanda Seyfried) finding their friendship and their mystery-solving partnership at an unexpected crossroads. There’s a chance the team could be dissolved, which understandably doesn’t sit particularly well with Scooby and Shaggy, the pair heading to the local bowling alley to vent their frustration.

From there things get a little strange, director Tony Cervone and his large team of screenwriters diving headfirst into creating a massive Hanna-Barbera universe that includes the likes of Dick Dastardly (Jason Isaacs), The Blue Falcon (Mark Wahlberg), Dynomutt (Ken Jeong) and even Captain Caveman (Tracy Morgan). It also takes the team of Mystery, Inc. into the realm of the actual supernatural, as they all find themselves unexpectedly in the middle of a plot to open the gates of Hades and unleash the three-headed dog Cerberus upon an unsuspecting humanity.

When the film focuses on ideas of friendship and family, especially as they pertain to Scooby and Shaggy (the former learns he’s the key in Dastardly’s devious plan while the latter is told repeatedly he isn’t even moderately important), this nicely animated effort can be a fair amount of fun. But the team of Mystery, Inc. spends far too much time separated. Worse, they don’t expend a lot of effort solving the mystery they find themselves forced to investigate. Answers just fall in their collective laps much of the time, and I admit this caused my attention to wander multiple times.

Some of the humor doesn’t fit particularly well inside the animated confines of this story, either. The Shrek-ification of Scooby-Doo and company feels forced and ham-fisted, while some of the more adult gags fall uncomfortably flat the majority of the time. Some of the all-star vocal casting can also be a minor distraction, Morgan, Forte and Wahlberg particularly so, and while this is more my issue than it is anything else, hearing their voices come out of the mouths of those characters drove me slightly nuts.

There are some lovely moments, however (including an extended gag with Daphne befriending a pint-sized robot), and I also did kind of love a handful of the Hanna-Barbera in-jokes that link the film to the studio’s massive classic animated library. I never hated my time watching Scoob!, and on more than one occasion I found myself contentedly smiling even if I didn’t exactly know what that was. Most importantly, little kids are likely going to love this new investigation into the unknown with the Mystery, Inc. gang, so I guess on that front Scooby-Doo’s superheroic supernatural adventure has to be considered something of a minor success.

No special features are included on the 4K Ultra HD disc. All extras are located on the included Blu-ray disc and include:

There are over 20 minutes of deleted scenes. I’m honestly still trying to wrap my head around that.

Scoob! looks and sounds incredible on this 4K Ultra HD disc, Warner’s technical presentation perfect. The movie? It’s a decidedly mixed bag, and while it was moderately fun to see a potential Hanna-Barbera universe take shape, this film is still too slapdash and rough around the edges to be consistently entertaining for any viewer over the age of eight or so. Still, little kids will undoubtedly love it, and that’s no small thing. 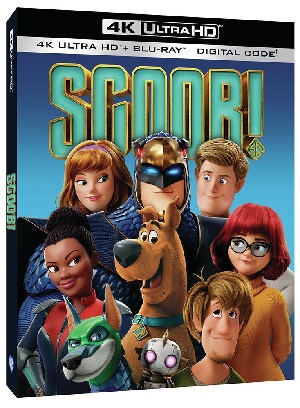