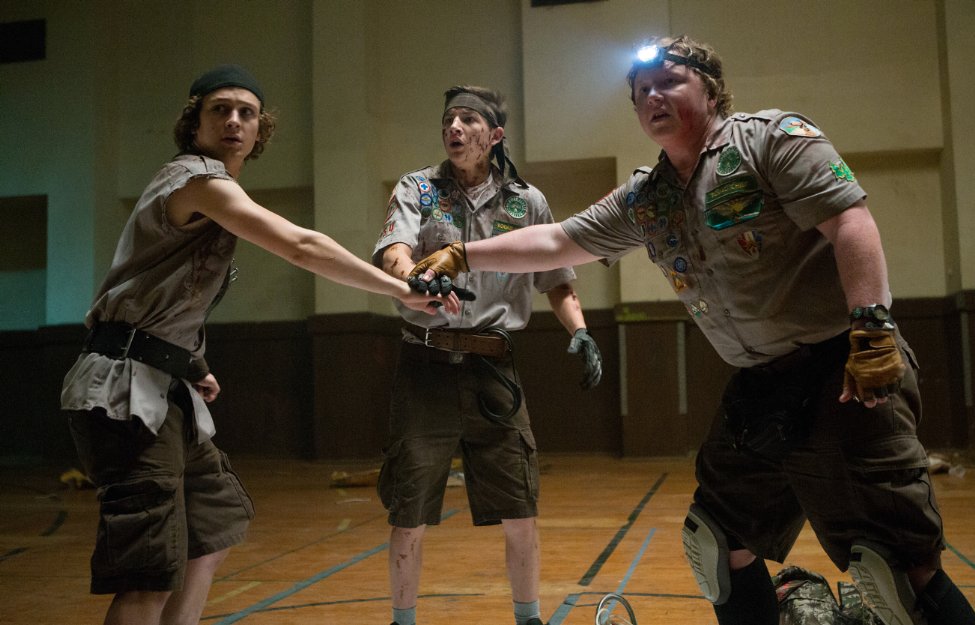 “Guys, the police are gone! The military? They’re not coming either. But tonight, we’re showing what being a real scout’s all about. We’re just gonna stand here or we’re gonna go save the world.” 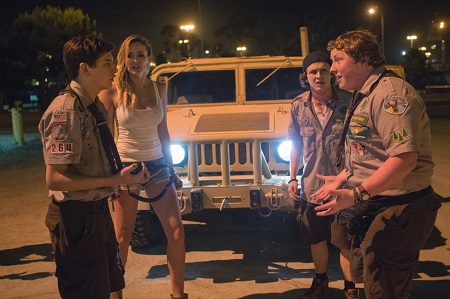 “Ben (Tye Sheridan) and Carter (Logan Miller) are calling it quits as far as Scouting is concerned. Their good friend Augie (Joey Morgan) is about to receive their group’s highest honor, and in celebration all three are going to spend the night in the great outdoors along with Scout Leader Rogers (David Koechner). But after that? They’re done, only needing a way to let the third member of their trio know it, hopefully not breaking his heart when they do.

When Ben and Carter get invited to a late night party by the latter’s older sister Kendall (Halston Sage), the pair choose to secretly slip away from the camping trip, hopefully without Augie noticing. But things take a wrong turn when he calls them out on their deception, angry that they’d chosen not to invite him along as well as hiding their feelings that remaining Scouts isn’t for them. He’s upset, understandably so, the trio’s friendship put at serious risk as all go their separate ways into the night uncertain if they’ll ever be this close again.

They’re going to have to put all this behind them pretty quickly because it turns out the zombie apocalypse has hit their town and it’s up to them, along with handy-with-a-shotgun strip club waitress Denise (Sarah Dumont), to help survivors, including Kendall, get to safety. That’s the scenario as it pertains to free-flowing gross-out horror comedy Scouts Guide to the Zombie Apocalypse. An enjoyable gore-filled trifle, the film is an absurdist combination of Shaun of the Dead, Dead Alive, The Goonies and American Pie, and while things never go anyplace surprising, it’s all so easygoing and good-natured I had a good time watching it even if part of me knew better than to do so.

While one would be forgiven if they assumed all of this was based on (or at the very least inspired by) a graphic novel, video game or comic book, the movie is actually an original idea, the four credited writers – which includes director Christopher Landon (Paranormal Activity: The Marked Ones) – making the attempt to do something new. As nice as this might be, I can’t be the only one that sort of wishes the film lived up to its title, would have showcased Ben, Carter and Augie utilizing more of their combined scouting skills to dispatch the zombie horde currently on the attack. Instead, they’re content to use genre tropes fans of these types of stories will find exceedingly familiar, as such the fun factor is diluted a fair amount. 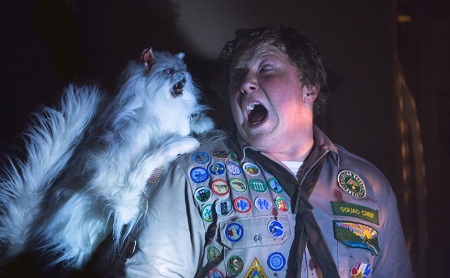 It’s not a total shock that I’m more open to something like Scouts Guide to the Zombie Apocalypse than most viewers are likely to be. That does not mean I was ready to give it a pass heading into the promo screening. If anything, I was wary entering the theatre, and for the life of me, I had trouble believing Landon and company were going to be able to pull this type of horror-comedy hybrid off. But they do, more or less, the strengths of the performances and the number of solid laughs winning me over, and as such I’m quite happy I chose to give it a look.”

Scouts Guide to the Zombie Apocalypse makes me laugh. I’m not sure what else there is to say.

Scouts Guide to Filmmaking (29:34) – A rather substantive making-of featurette that’s filled with much in the way of behind-the-scenes info that’s actually rather interesting whether one enjoys the film itself or not.

The Zombie Makeup FX Handbook (5:37) – Medically-accurate zombie makeup application, I kid you not.

Uniforms and You: Costume Design (5:11) – Costume Designer Marylou Lim takes a look at the various looks required throughout the film for human and zombie alike.

Deleted Scenes (2:36) – Two of them, neither of which are very long (or interesting).

I’m not going to make the case that Scouts Guide to the Zombie Apocalypse was some unsung, underappreciated horror-comedy classic that was wrongly dismissed by critics and audiences during its initial release back in November of last year, it isn’t and it wasn’t. But the movie does make me laugh, and I can’t help but like the cast and find myself amused by a number of their antics. Also, the gore effects are relatively inspired, and that in and of itself make this one a-okay in my book. So there. 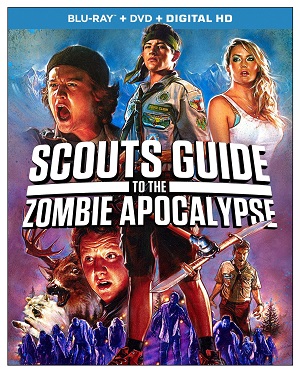