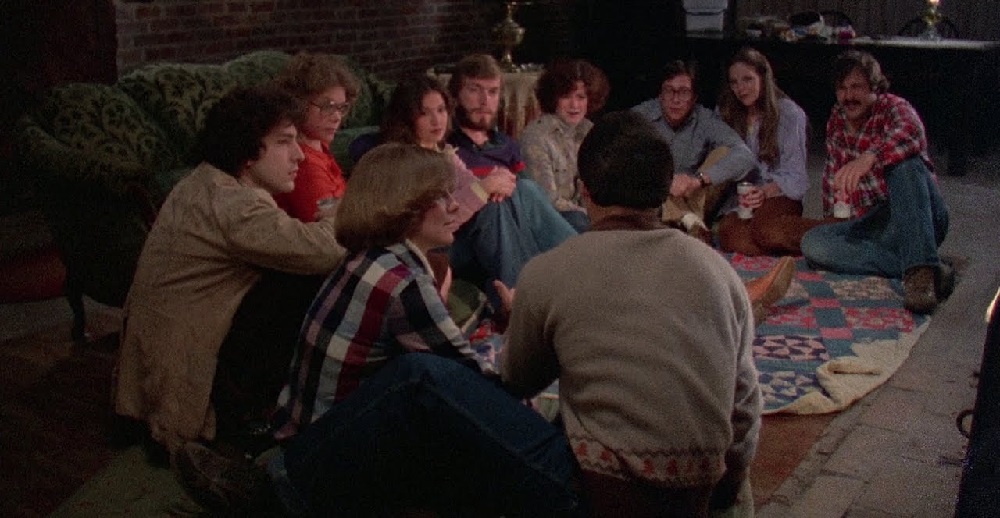 A group of college friends decide to spend a winter weekend at a secluded cabin in the woods and end up telling one another scary stories in front of a roaring fireplace, all the while an eerily ominous wind grows in sound and fury just outside the door.

Screams of a Winter Night is a low-budget – yet still surprisingly ambitious – horror anthology made by producers Richard H. Wadsack (who wrote the script) and James L. Wilson (who directs) seemingly by the seat of their pants and precious few resources. This release includes both the 1979 theatrical cut of the film as well as its long thought lost director’s cut featuring a fourth story involving a decrepit graveyard and a vindictive tree witch hellbent on revenge.

The film’s game primary cast – Matt Borel, Gil Glascow, Brandy Barrett, Jan Norton, Charles Rucker, Mary Agen Cox, Robin Bradley, Beverly Allen and Ray Gaspard – play multiple roles, and do so with a great deal of enthusiasm if not a lot of versatility. Not a single one of them phones things in, and it’s clear each actor is intent on giving their all even when the material goes in some unintentionally laughable directions.

What I love about films like this is that you can see the passion leaping off of the screen. There are some wonderful ideas, and even if practically none of them are realized all that well, I still could not help but smile while watching the majority of these tales play themselves out to a conclusion. Two of the stories are particularly effective, the aforementioned one involving the tree witch (laughable creature puppeteering notwithstanding) and another, shockingly visceral story about a lonely young woman who homicidally snaps after a blind date gone disgustingly wrong.

There’s also the wraparound narrative involving a murderous “wind spirit” that works far better than it has any right to. The climactic mayhem is shockingly decent – can’t help but think this sequence is where most of the budgetary dollars went – and I was a little surprised just how cutthroat it all was. Additionally, in typical late 1970s experimental horror film style the ending is jubilantly ephemeral. Things are left purposefully unfinished in a maddeningly perfect way, and when the screen cut to black I didn’t know if I wanted to throw something at my television in anger or leap up from my couch unleashing a euphoric cheer.

Screams of a Winter Night isn’t some long, lost classic brought back to life on Blu-ray for a new generation to appreciate. It is, however, an example of underground, guerilla-style genre filmmaking of the ‘70s and ‘80s that needs to be lovingly appreciated and seen for the improbable marvel it oftentimes was. I had a blast discovering this one. Here’s hoping those curious to give this anthology a look will end up feeling the same.

I’m not going to lie and say that Screams of a Winter Night is some long, lost horror anthology classic. It isn’t. But the film has so much go-for-broke, let’s-put-on-a-show charm that it’s not a huge deal that a lot of this doesn’t end up working particularly well. Heck, a couple of the stories generate actual tension, and had the filmmakers had funds to match their ambitions, there’s a chance this could have been pretty good.

Anyhow, this Code Red release is worth picking up if this sort of retro genre curiosity is your sort of thing. I know I’m happy to have it in my library, and I imagine I’m not the only one who will end up feeling that way. 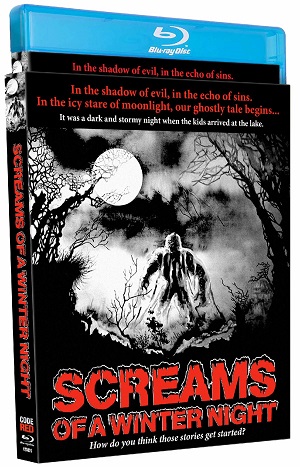