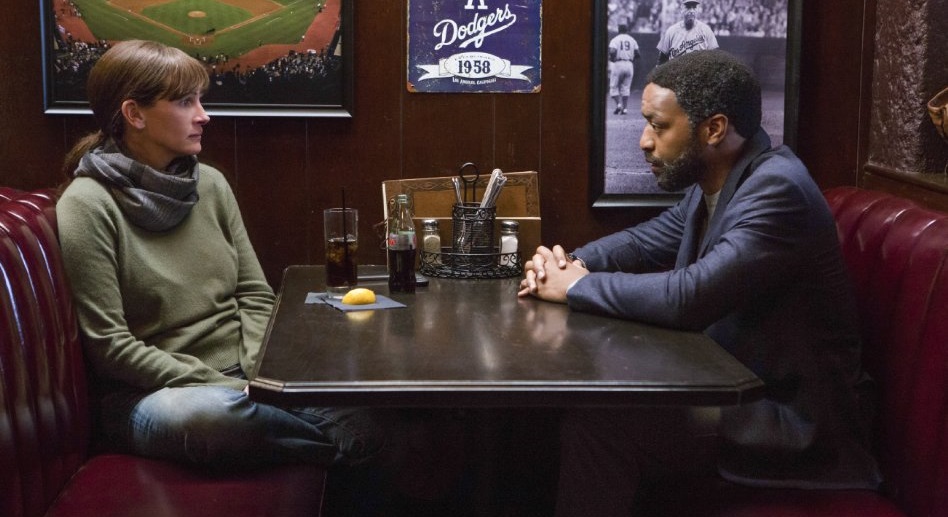 “Justice…I owe my daughter that.” 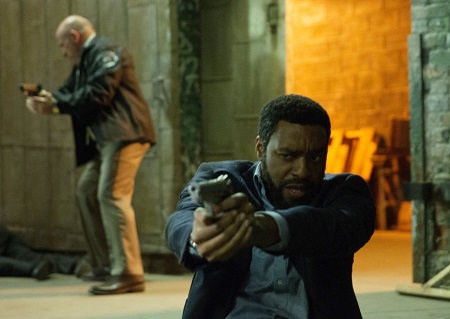 “For 13 years retired FBI counterterrorism agent Ray Kasten (Chiwetel Ejiofor) has been obsessing over the case that got away from him, and it had nothing to do with national security. When he was stationed in Los Angeles, he was partnered with local DA investigator Jess Cobb (Julia Roberts), the pair striking up a close friendship that even extended to his taking an interest in her outgoing teenage daughter, Caroline (Zoe Graham). But when Caroline’s body is found in a dumpster next door to a mosque they had under surveillance, the veteran agent becomes obsessed with solving the crime, Deputy District Attorney Claire Sloan (Nicole Kidman) worried Kasten will burn himself out if he can’t find justice for his emotionally devastated partner.

Her fears are well-founded, Kasten’s evidence falling on deaf ears. Turns out, the man likely to have been responsible for the crime was someone then L.A. District Attorney Martin Morales (Alfred Molina) wasn’t interested in prosecuting, and Morales couldn’t understand why those working for him in 2002 didn’t feel the same given the state of world events then.

Now, over a decade late, with Sloan the new D.A. and Kasten certain he’s got new information that will finally bring Caroline’s killer to justice, the seeds appear to be planted for success to sprout. But not everything is as it seems, and while Jess is apparently onboard with her former partner’s desire to reopen this long discarded cold case, the secrets she’s keeping might be too gigantic for any amount of fanatical sleuthing to be able to overcome.

For those familiar with the Academy Award-winning 2009 Argentinian mystery-thriller The Secret in Their Eyes, what is actually taking place and where the truth ultimately lies in writer/director Billy Ray’s star-studded remake will not catch anyone by surprise. Nonetheless, the movie manages to hold up as its own distinct animal, anchored by a trio of strong performances from the leads that are never less that magnetic, sometimes even bordering on magnificent (especially as it pertains to Roberts). While never rising into the realm of excellence, this is still a solid, intelligently constructed policier that gets the job done, and for those unfamiliar with the original motion picture I’m fairly certain the central twists and turns will likely catch most somewhat off-guard.

Ray does spell things out far too clearly at times, especially near the end, something the original film never does. The overlapping flashbacks play themselves out during this section, an audio montage of one character’s statements made throughout the picture unnecessary, lessening the emotional impact of the discovery the former FBI star has spent over a decade being preoccupied with uncovering. There is still awe, the horror very much felt, just not nearly as fully and as intimately I thought was theoretically possible, the director apparently too unsure the audience would have been able to put together the final puzzle pieces without a little extra over-the-top input on his part.

If Ray does not show the same steady hand he showcased on his first two directorial outings (Shattered Glass and Breach) that isn’t to say he doesn’t still put forth a notable effort. For the majority of the film, he handles the dual timelines and past/present aspects of the narrative with dexterous skill. He weaves back and forth between 2002 and 2015 confidently, and not once did I feel like I was lost trying to gauge what was happening when. He also does a nice job of making it an honest-to-goodness guessing game as to whether or not the new man Kasten has put into the spotlight as Caroline’s murderer is the one we actually know did the crime 13 years prior. 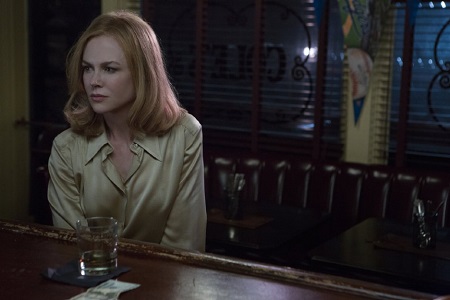 Secret in Their Eyes will not electrify viewers who’ve seen the Argentinian original with near the same magnitude. Ray doesn’t shake things up, doesn’t choose to go in a new direction, more or less doing nothing more than attempt to tell the same story but with an Americanized bent. But thanks to the efforts of the cast, especially the central trio, an unbelievably good Roberts most of all, and a smart, intelligently-constructed script that treats its audience with a great deal of respect, I found that this remake worthwhile. While not a classic, there’s no law that says it had to be, and as cryptic, labyrinthine thrillers revolving around family, obsession and justice are concerned, this remake was a welcome punch to the gut I couldn’t help but be moderately impressed by.”

I think The Secret in Their Eyes holds up much better than most critics are likely going to say it does. Billy Ray’s remake stands on its own. It also features one of Julia Roberts best performance, the actress going to unnervingly deep emotional places in order to bring her character to life. It doesn’t have the overall devastating staying power as the Argentinean Oscar winner has, but as a nifty little psychological thriller it still more or less works, and I think if viewers are willing to disassociate themselves from the fact another (admittedly better) version of the story exists I can’t help but feel they’ll have a more than satisfactory time seeing how this brutal, disturbing mystery plays itself out.

Audio Commentary with director/screenwriter Billy Ray and producer Mark Johnson – Solid commentary track with the two collaborators digging into casting, moving the action from Argentina to the United States and what it took to pull off some of the film’s more dynamic chase sequences.

Adapting the Story for Today’s World – A nice little featurette talking about what it took to update the story for American audiences and what it was about the Argentinean original that intrigued Ray and company to attempt a remake.

Secret in Their Eyes did not make the impact during its initial theatrical release one would normally expect a film with this much star power to have done so. Pity, because Billy Ray’s remake is a solid, niftily-plotted little suspense flick, featuring a performance from Julia Roberts that’s in my opinion one of her absolute best. While it doesn’t supplant the Argentinean original, the film still works in its own right, this solid puzzle box of a mystery-thriller keeping my more than satisfied as it made its way to its emotionally tragic conclusion. 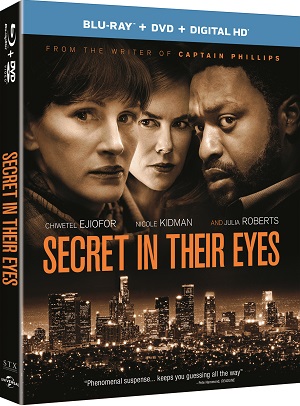