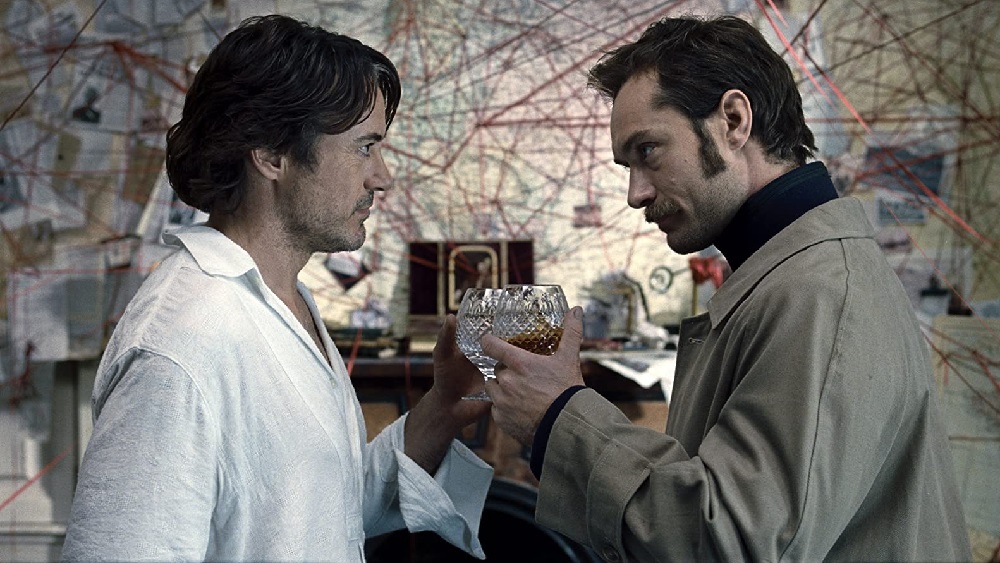 “You see, hidden within the unconscious, there is an insatiable desire for conflict. So, you’re not fighting me, so much as you are the human condition.”

Here’s what I wrote about this one back in December of 2011:

“The world is on the brink of war. Anarchists in France and Germany seem set to pit their countries against one another. But Sherlock Holmes (Robert Downey, Jr.) does not believe these events are as politically motivated as European governments seem to have surmised. He believes one man, criminal mastermind Prof. James Moriarty (Jared Harris), is responsible for setting these battlefield wheels into motion. With the aid of recently wed best friend and compatriot Dr. John Watson (Jude Law), as well as the assistance of the beautifully lethal gypsy Madam Simza Heron (Noomi Rapace), Holmes makes it his mission to stop his devious archnemesis no matter what the personal cost.

I could spend more time dwelling on the plot of Sherlock Holmes: A Game of Shadows, going into more detail in regards to the characters who drive the film forward and the intricacies of the global implications at the heart of the labyrinthine scenario, but honestly I don’t see any reason to. Brining in the renowned detective’s most legendary adversary, returning director Guy Ritchie and screenwriters Michele Mulroney and Kieran Mulroney (Paper Man) have kept things relatively simple, reducing Sir. Arthur Conan Doyle’s iconic character to nothing more than an intellectual late 19th century James Bond intent on stopping a madman from world domination.

That’s it. There’s nothing more to it. Unlike its 2009 predecessor, there’s very little mystery to be solved in this sequel. Prof. Moriarty is a distaff Max Zorn looking to find his view to a kill, hoping to engender animosity and hatred between nations to benefit his own pocketbook. It’s a lazy premise, and to put Holmes to this level is something next to an abomination. For fans of the character and his literary adventures, I can’t imagine any of them are going to be remotely pleased by Ritchie and his creative team have done with Doyle’s literary hero.

Still, spending 130 minutes with Downey and Law is hardly a chore, and Harris is sublime casting for Moriarty. Everyone gets back into the rhythms and the cadences established by the first film with relative ease, and for all its dramatic faults I can’t say I wasn’t entirely displeased to be sitting in the theatre taking it all in. Ritchie stages some magnificent set pieces, an early chase through a London gambling hall an exhilarating exercise in action dynamics that left me breathless. There is great fun to be found if one wants to look hard enough for it, and I’d be remiss if I didn’t admit that the preview audience I watched the sequel with did appear to be enjoying themselves.

Not that I care all that much. The female characters are horrifically underwritten and poorly utilized, only the returning Rachel McAdams making any sort of impression, and she’s only in the darn picture for five or six minutes. Ritchie also throws in so many stylistic flourishes the overwhelming confluence of them slowly becomes more off-putting than they are thrilling. I found it all to be rather suffocating, the last third a noisy slog of Boom! and Crash! and Bang! that drove me nuts.

I liked the first Sherlock Holmes a lot, and even if that rough, ready-for-action version of Holmes wasn’t entirely kosher as far as the literary incarnations of the character were concerned, he wasn’t as far removed from Doyle as I assumed he was going to be before watching. It’s sadly quite the opposite with this second chapter in Ritchie’s reboot series. Holmes is more apt to use his brawn than he is his brain, while the puzzle he’s trying to solve wouldn’t even challenge a fifth grader’s intellect let alone the supposed World’s Greatest Detective. This Game of Shadows isn’t all that clever, and the only thing mysterious is how something this lazy and uninspired could have been brought forth into the light of day in the first place.”

I still do not like Sherlock Holmes: A Game of Shadows. I hate what they do to Rachel McAdams. I loathe that they transform Holmes into James Bond. I get upset that Prof. Moriarty’s plan is so straightforward and rudimentary. This sequel just doesn’t do it for me, and as strong as Warner’s new 4K presentation might be, that does not mean I plan on revisiting this one again anytime soon.

No special features are included on the 4K Ultra HD disc. All extras are contained on the previously released Blu-ray that is also included with this set.

Still don’t care for Sherlock Holmes: A Game of Shadows. It’s not very good. However, Warner’s 4K Ultra HD presentation of the sequel is exemplary, and even with the lack of any new extras, I’m still betting fans will be keen to add this one to their home libraries the moment the disc goes on sale. 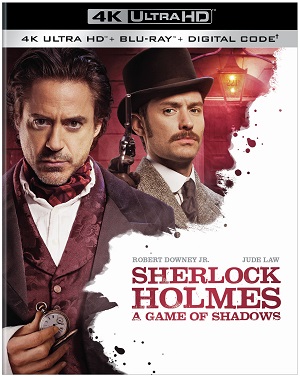