“Sanity’s not a choice, Marshall. You can’t just choose to get over it.”

Here’s what I wrote about Shutter Island in my theatrical review way back in February of 2010:

“Veteran United States Marshal Teddy Daniels (Leonardo DiCaprio) and his new partner Chuck Aule (Mark Ruffalo) have come to the secluded Shutter Island Mental Hospital for the Criminally Insane to solve a crime. Rachel Solando (Emily Mortimer) has vanished from the institution, the supposedly brilliant murderess managing to get out of her locked room unnoticed.

What should be a straightforward investigation quickly goes haywire, the Marshals butting heads with the facility’s top man Dr. Cawley (Ben Kingsley) and his mysterious German chief physician Dr. Naehring (Max von Sydow). Additionally, Daniels’ reason for coming to the island aren’t what they initially appear to be. He believes the person responsible for the death of his wife Dolores (Michelle Williams) is in a cell somewhere on the grounds, and he wants to find out where that is. But Shutter Island is full of ghoulish surprises, and if the longtime Marshal isn’t careful, he might just find what it’s like to be a patient here firsthand.

Martin Scorsese’s long-delayed psychological horror-thriller Shutter Island is an odd animal. From a purely technical standpoint, the legendary filmmaker’s adaptation of Dennis Lehane’s best-selling novel is a masterpiece. Sadly, from an emotional one the film is anything but, a third act twist so unbelievable it lays waste to everything that came before it. The reasons for investing emotionally in the characters or in their attempts to solve the institution’s numerous mysteries are pointless, and because of that the disappointment I felt walking out of the theatre was undeniably massive.

For those interested in seeing the director pay homage to the likes of Stanley Kubrick, Claude Chabrol, Alfred Hitchcock and Alain Resnais, there is admittedly much here to analyze and revel in. Scorsese relishes every bit of Laeta Kalogridis’ (Pathfinder) intimate screenplay, the director allowing the plot to unfold with a malevolent elegance a lesser filmmaker would have been unable to achieve. Every music queue, every creepy sound effect, every scratch in a stone façade and every move of the camera feels eerily authentic, the auteur in such complete control his confidence manipulating the narrative is magnificent.

Equally unsurprising, he also gets stupendous performances from every member of his all-star cast. DiCaprio is Oscar-worthy, while Ruffalo, Kingsley and Sydow find the intricate nuances of their respective characters with ease. Mortimer and Williams make the most of their limited screen time, while Jackie Earle Haley, Ted Levine, John Carroll Lynch and Elias Koteas all make significant contributions. Best of all is Patricia Clarkson, her pivotal scene with DiCaprio mesmerizing. She dives into this psychological abyss head-first, her ethereal presence haunting the remainder of the proceedings like one of Daniels’ ghostly apparitions observing his every move.

All that’s great, but thanks to that aforementioned climactic twist it just isn’t enough to compensate for just how catastrophically the plot crashes down to earth. There is a fundamental flaw lurking inside this tale, one that was also a part of Lehane’s original novel, and one Scorsese isn’t able to overcome. While all the pieces of the puzzle are here, and much like The Usual Suspects or The Sixth Sense a viewer could likely go back to the beginning and put them together rather easily, that doesn’t mean they work.

The plot goes annoyingly bonkers at just the wrong moment, making everything that takes place an outright lie that could never have happened in the way manner visualized during the first two-thirds of the film. It all smashes to into wispy clouds of noisy nonsense like waves crashing against a rocky shore inadvertently making the movie an obnoxious con game. I hated how things concluded, the climax immediately eradicating my emotional investment in all that had been taking place in the very instant the truth is finally revealed.

Scorsese has walked down this road before with his remake of Cape Fear. But even though that film turned into a star-driven Freddy Krueger-like slasher I still enjoyed it far more than I did Shutter Island. It was at least populated with real people facing actual problems who all had genuine hardships to try and overcome. When danger came calling, I cared about what might happen to them, and that sadly just isn’t the case here. As good as it all looks and sounds, and as dazzling as the acting might be, nothing in this glossy haunted house matters, and as twisted mind games go this is one I have no wish to ever play again.”

I can’t say that my overall opinion on Shutter Island has changed over the last decade. I still think the central twist simply does not work, making the entire movie a frustrating lie where everything that happens is outside the realm of even passing believability. I just don’t buy it, and as such the overall story simply does not work for me, and revisiting it for the first time in a few years I’m struck by just how much that is still the case.

Wait I can admit is that Martin Scorsese directs the heck out of this motion picture, while the entire cast give superlatively compelling performances that fit his vision for Dennis Lehane’s source material and Laeta Kalogridis’ screenplay nicely. It’s also stunningly shot by Robert Richardson and features crackerjack sound design, all of which makes the film an almost essential upgrade to the 4K Ultra HD format.

But I still don’t really care for Shutter Island. I wish I did, but I don’t, and no amount of fantasizing otherwise is ever going to change that.

No special features are included on the 4K Ultra HD disc. The remainder of the extras are located on the included Blu-ray disc and are ported over from the previously released Blu-ray.

The 4K Ultra HD release of Martin Scorsese’s Shutter Island is magnificent. The film has never looked or sounded better. I just wish I enjoyed watching it more. Still, from a technical standpoint this release comes amazingly close to perfect, and even with no new extras (other than some spiffy steelbook packaging) for fans this disc is likely worth the price of an upgrade. 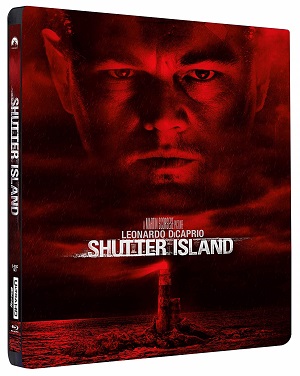