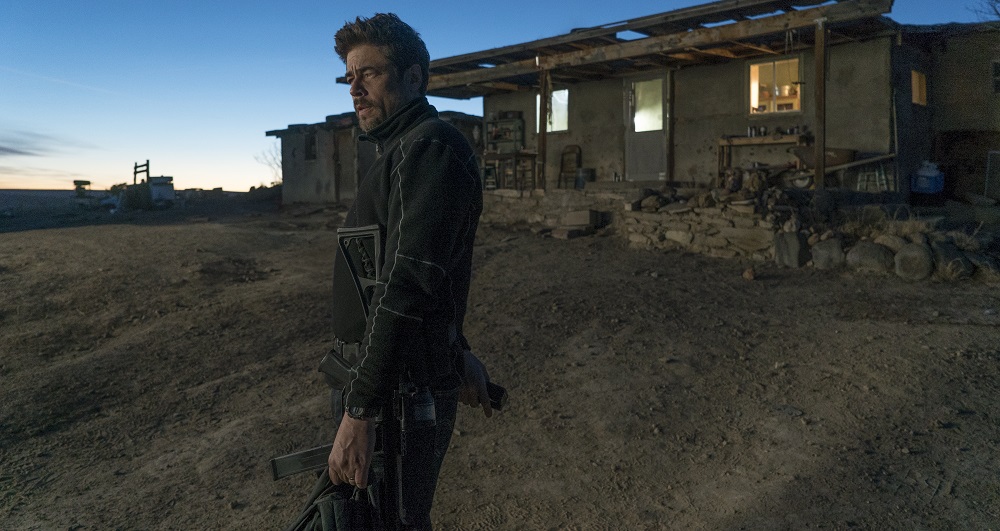 After a suicide bombing at a packed Kansas City store leads back to drug cartel coyotes bringing undercover terrorists across the southern border masquerading as migrant workers, the U.S. government covertly tasks federal agent Matt Graver (Josh Brolin) to create havoc in Mexico. They want him to start a war between cartel bosses, hopefully crippling their activities while also forcing the Mexican government to take lethal action for themselves. Graver enlists the help of assassin Alejandro (Benicio Del Toro), the duo coming up with a plan to kidnap Isabel Reyes (Isabela Moner), the daughter of a powerful cartel chief, in order to sow the seeds of chaos. 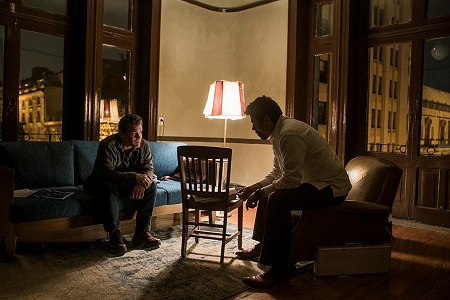 At first all goes to plan. But while transporting the teenager back into Mexico to be looked after by authorities there Graver’s military convoy is attacked by corrupt police working for the cartels. Forced to defend themselves, the soldiers slaughter over a dozen officers while at the same time Isabel escapes into the desert during the confusion. While the unit heads back into the U.S. before Mexican authorities make an international incident out of what has just happened, Alejandro stays behind to track the girl. What no one knows is that the carte blanche they’d been originally given by the White House has been rescinded thanks in large part to this one bloody firefight on the wrong side of the border, and that means all loose ends, including Isabel, need to be tied off.

Picking up some time after the events of 2015’s Sicario, screenwriter Taylor Sheridan continues Graver and Alejandro’s stories with Sicario: Day of Soldado, an aggressively pugnacious sequel that’s a viscerally uncomforting descent into a self-created hell on earth overflowing in violence and death. New director Stefano Sollima (“Gomorrah”) picks up the reins from the departed Denis Villeneuve, and while he’s nowhere near the visually fluid cineaste his predecessor was, the filmmaker brings an exacting documentary-like feel to things that is assuredly confident. Far from an easy film, working in moral grey areas so noxious breathing in their fumes for too long is dangerous to one’s health, this dramatic thriller is rough going, and as impressive as it might be I’m equally not altogether sure I enjoyed watching this story play itself out to its ethically ambiguous conclusion.

While not the hushed gut-punch of an opener that the first film cleverly showcased, the prologue to this sequel is still brutally insidious in ways difficult to put into proper perspective. Sheridan and Sollima do not shy away from the senseless violence of the suicide attack, so much so the pair almost revels in the exploitive nuances at the core of this depiction of the bombing. How the pair depict what is happening on the southern border, the way in which the analyze the actions of the bombers, a casual viewer uninterested in digging deeper than surface level would undoubtedly conclude the filmmakers are parroting Right Wing talking points, maybe even feel the two are engaging in blatant race-based fear mongering.

The remainder of the film dissects those initial observations with thuggish specificity. Sheridan’s script is a blunt instrument that revels in a number of stereotypes, a great many of them disturbingly xenophobic. At the same time it also goes to great lengths to dissect the militarization of the border and decry the U.S. government’s all-too-frequent strategy of turning to bombs and bullets to solve complex problems relating to national security. Graver and Alejandro might be very good at their respective jobs, but the truth of the matter is their involvement oftentimes makes things worse, not better, and this is a simple truth each of them appears to be perfectly comfortable with.

This gives the movie a murky, morally conflicted quality that is both a plus and a minus. The fact Sheridan is so willing to descend into such complicated depths of the human condition and the political consequences of violence is certainly laudable. The he so often has to utilize so many egregious and repugnant stereotypes to get there is just as unfortunate. The resultant movie fascinates and appalls in almost equal measure, all of which makes Isabelle’s journey into this isolated and barren nightmare all the more difficult to endure.

I can say that Del Toro and Brolin are still outstanding, and young Moner brings a hauntingly mesmeric innocence to things that in the end is devastating. Sollima, while nowhere near the kinetically enthralling visualist as Villeneuve is, still stages a handful of pugnaciously primeval moments that undeniably get the blood pumping. Channeling the late, great Jóhann Jóhannsson who crafted the score for the original, composer Hildur Guðnadóttir’s (Tom of Finland)  are instantly compelling, his music having a stirring, nerve-rattling eloquence that’s magnificent.

But Day of Soldado is missing an anchoring presence like the one so mesmerizingly portrayed by Emily Blunt in the first film. It was through her FBI agent Kate Macer’s eyes (and to a lesser extent those of her partner Reggie Wayne, smoothly underplayed by a pre-Get Out Daniel Kaluuya) that we saw the starkly dreary immorality of life on the Mexico-U.S. border. It was also through her we were able to maintain both a sense of sanity as well as a connection to our own humanity as viewers. As Alejandro ominously tells her, “Nothing will make sense to your American ears, and you will doubt everything that we do, but in the end you will understand.” And that was true. As terrible as it all was, through her we were able to get gain some sort of uneasy understanding of the maliciously loathsome events playing out up there on the cinema screen.

Here, however, there is no center. There is little to anchor one’s emotions upon, no one to help give this growing sense of revulsion perspective. Alejandro and Graver, while not total monsters, know who they are and understand the actions they undertake to battle the drug cartels aren’t exactly doing their immortal souls any semblance of good. Even when they do decide to take a stand against doing the unspeakable that doesn’t mean they’re doing so for entirely selfless reasons. This sends the movie down a rabbit hole of ever-escalating detestation and cruelty that only grows more extreme and senseless, making this sequel an observational exercise of violence and inhumanity and precious little else. 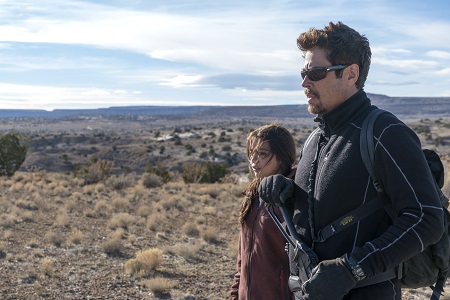 Which is likely the point. It’s easy to simplify things, to say Sheridan and Sollima are trading in racist caricatures and fascist stereotypes and little else. But I do think what the filmmakers are attempting is far more complex than that, and by presenting this world and these characters as they do they’re making the argument that the whole dialogue of what to do about drug cartels and immigrants crossing through the Mexico-U.S. border illegally is fundamentally rotten. The sequel wants to take U.S. government policies on how to deal with all of this to task, presenting them as jingoistic, short-sighted pieces of propaganda lunacy deserving, not so much of reevaluation, as they are of being dispensed with and dismantled altogether.

Does Sicario: Day of Soldado achieve its goals? I don’t have an answer to that question. The way it presents so much of the mayhem and murder is more akin to a mid-1970s grindhouse exploitation thriller or a 1980’s Cannon Films low budget sensationalistic actioner than it resembles its 2015 predecessor. Because there’s no focal point to what is happening, Sheridan’s script becomes a mishmash of themes and ideas that can offend just as often as they elucidate. As of right now, I’m just not sure what I think about this sequel, and as such I just don’t see how I can offer up any sort of recommendations for others to see it until I do. 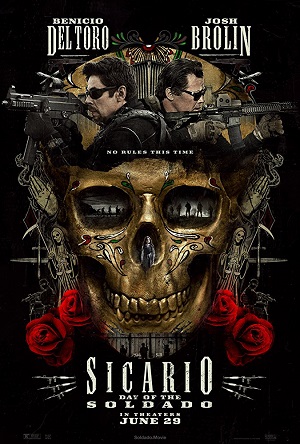