When their parents Bucky (James Brolin) and Deana Ellis (Dianne Wiest) decide to sell the family home, sisters Maura (Amy Poehler) and Kate (Tina Fey) are tasked with cleaning out the remainder of the childhood remembrances before the new owners can take control of the property. Not wanting to leave without one final goodbye, they invite as many of their old High School classmates as they can to a party, believing that this last rambunctious affair will be just what’s needed to get both excited about tackling their respective lives once again. 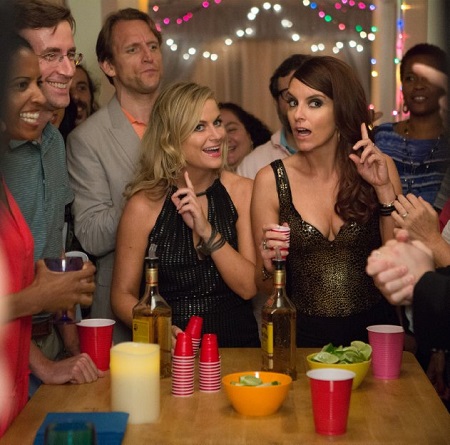 This is necessary because neither is in a great place at the moment. Straight-laced, by-the-book Maura has just seems to be running in circles right now, so obsessed with making sure everyone else is doing all right she forgets to check in on her own wellbeing. As for Kate, she’s maybe the loving mother of teenage daughter Haley (Madison Davenport) but that doesn’t make her any less irresponsible, going through jobs and boyfriends as if both were a bag of chips ready for consumption. This party will change everything, both sisters just know it, the future going to be even brighter in large part because they were willing to let their hair down and go crazy one last time.

The glory of Sisters is how honest and authentic it feels. As crazy as things might get, as absurd as events might become, everything stays centered directly upon Maura and Kate no matter what, making their respective journeys mean something by the time drunken chaos reaches its unavoidable breaking point. Directed by Jason Moore (Pitch Perfect), written by “Saturday Night Live” veteran Paula Pell, this movie is a delightfully hysterical foray into frivolity and family that’s a continuous hoot, everything building to a nicely comforting coda I absolutely adored.

To no one’s surprise, Poehler and Fey make a sensational comedic team. It’s been a joy to watch their chemistry evolve over the years, their ability to work one with the other on such a symbiotic level recalling Robert Redford and Paul Newman in Butch Cassidy and the Sundance Kid and The Sting. If Baby Mama was the test run for their cinematic abilities and their time hosting the Golden Globes a way to hone them, than Sisters is the fruit of their collective labors. The two have such an easy give-and-take one could watch them recite the alphabet and probably enjoy every last second of it, the ease in which they play one off the other continually stupendous.

The supporting cast is made up of a number of familiar faces, a great majority of them fellow “Saturday Night Live” veterans, and almost all down the line each of them produce a number of solid laughs. But it’s Maya Rudolph as Brinda, a former High School ‘mean girl’ who Kate can’t stand, who steals the show, her performance so beautifully complex yet also just as incredibly hysterical watching her is a continuous delight. Better, her final showdown with Fey is surprisingly personal, revealing hard-edged truths that actually brought a tiny little tear to my eye.

As for the rest, John Cena follows up on his scene-stealing work in Trainwreck with another unforgettable little portrait of stone cold silliness here, while veteran character actor John Leguizamo has a number of terrific little moments as a local liquor store owner who’s always had the hots for Kate. Then there is “The Mindy Project” and “The League” regular Ike Barinholtz. He’s the sexy single who just moved into the neighborhood that catches Maura’s eye, he and Poehler crafting an air of sweet, simple romanticism I couldn’t help but be won over by.

It’s all a little thin at times, and the level of destruction that ends up transpiring ends up feeling more suitable to something like The Blues Brothers or The Money Pit than it does with the story taking place here. But Pell’s script, inspired in no small way by her own relationship with her own sister, is so smart, so genuine, as crazy as things might get the human saga at the center remains pure and realistically heartfelt no matter what. With Poehler and Fey working at such a high level, and with the laughs being as constant, and as massive, as they prove to be, Sisters is just a joy to behold, watching it a rambunctious riot I almost didn’t want to see come to an end. 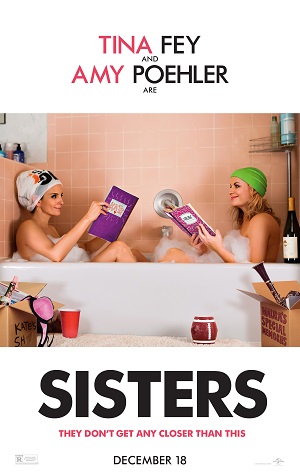