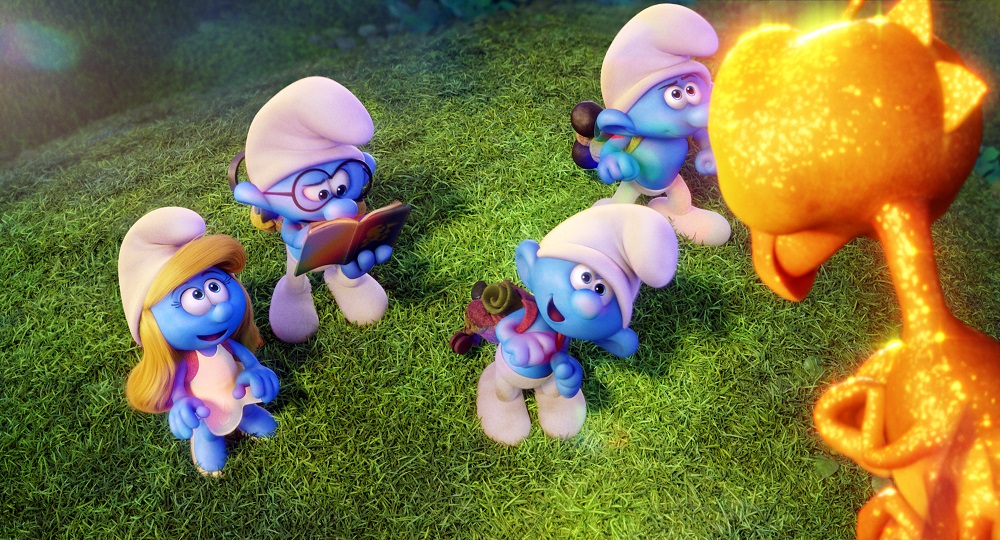 Unlike its two perfectly dreadful live action / animated hybrid predecessors, 2011’s The Smurfs and 2013’s The Smurfs 2, the entirely animated Smurfs: The Lost Village is a fairly solid family-friendly entertainment, especially for younger viewers. It is devoid of any of the bathroom humor, oddly ugly violence and ghastly narrative stupidity that helped mar those previous features to the point they’re practically unwatchable, and even though both did reasonably well at the box office it’s not like either is remembered with anything approaching fondness. No, this new film, an original story disconnected from its forerunners, is fairly entertaining, and while far from being a top-flight animated effort the darn thing ends up being just smurfy enough to make watching it moderately worthwhile. 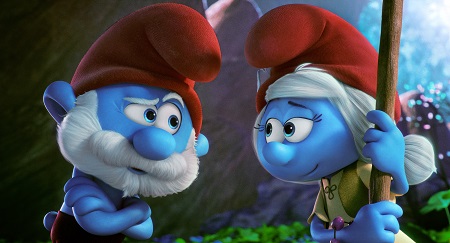 While out having fun in the forest with Brainy (voiced by Danny Pudi), Clumsy (Jack McBrayer) and Hefty (Joe Manganiello), Smurfette (Demi Lovato) spies what she believes to be a fellow Smurf running through the crack in the giant wall separating their realm from the Forbidden Forest. Before they can return to the Smurf Village to give this amazing news to Papa (Mandy Patinkin), Smurfette is captured by Gargamel (Rainn Wilson), the evil wizard using his magic to give him an idea where this lost Smurf enclave is hidden.

After being rescued by her three friends, Smurfette feels that these newfound fellow Smurfs are in danger and, worse, it’s all her fault. Even though Papa orders her to stay put, the blonde adventurer heads out to the Forbidden Forest intent on finding this lost village and warning the inhabitants that Gargamel is searching for them. She’s joined by Brainy, Clumsy and Hefty, all of whom are determined to aid Smurfette in her quest, these four Smurfs intent on going above and beyond in order to ensure they put an end to the wizard’s nefarious plans while hopefully meeting new friends who are every bit as smurfy as they are in the process.

This new movie revolves around concepts of friendship and self-discovery. The story is as simple as it sounds, the whole thing focused on Smurfette as she tries to figure out her place inside the Smurf world and discover who she is. It’s also a tale of friendship and camaraderie, these four intrepid explorers having to learn how to put their differences aside and use one another’s best attributes to their fullest potential if they are going to make their collective way through the Forbidden Forest and find this hidden Smurf village. That’s really it, there’s not a lot more, screenwriters Stacey Harman (“The Goldbergs”) and Pamela Ribon (Moana) keeping things straightforward and simple they move things toward their suitably heartfelt and selflessly heroic conclusion.

If anything, this new film plays a lot like the old 1980s Saturday morning cartoon series “The Smurfs” did for nine seasons. Director Kelly Asbury (Shrek 2) takes his talented team of animators and attempts to embrace the late Belgian artist and author Peyo’s creations in a way neither of the two live action films did. They treat the characters with heartfelt respect and admiration, allowing them to stay true to their core characteristics while updating certain themes and ideas (most notably as they pertain to Smurfette and concepts of female empowerment) for today’s audiences. It’s an easygoing, happily relaxed adventure filled with some wonderful sights and sounds, the world of the Forbidden Forest a continually pleasing visual delight overflowing in imagination. 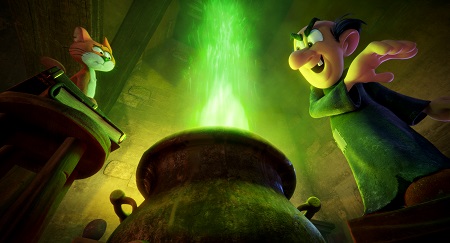 But it all does exist on a reasonably simplistic level, and as entertaining as the film can be for those older than the age of eight the chances anyone is going to remember this one after it comes to an end for anything longer than 15 or 20 minutes are extremely unlikely. The all-star voice cast, which includes the likes of Julia Roberts, Ellie Kemper, Michelle Rodriguez, Ariel Winter, Meghan Trainor, Jake Johnson, Tituss Burgess and Jeff Dunham, are all given precious little to do that’s substantive. Only Lovato and Wilson make anything close to an indelible impression, while McBrayer does have a line or two that made me chuckle out loud with a tiny bit more volume than expected.

Still, Smurfs: The Lost Village is easy to sit through, and I know I’m repeating myself here but, once again, young children are likely going to be delighted with the film in ways they never were with either of its live action ancestors. There are also moments of colorful, eye-popping imagination and whimsy that are honestly wonderful, and while I’m not ready to sing a happy song or smurf it all day long, I might just have a few la la la-la la la’s running through my head at the moment and, shockingly, I’m perfectly okay with that. 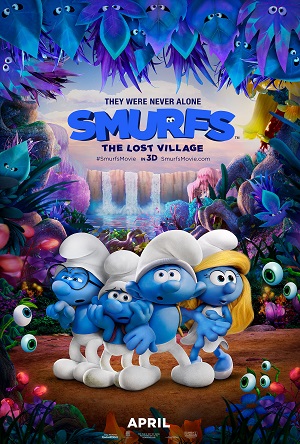