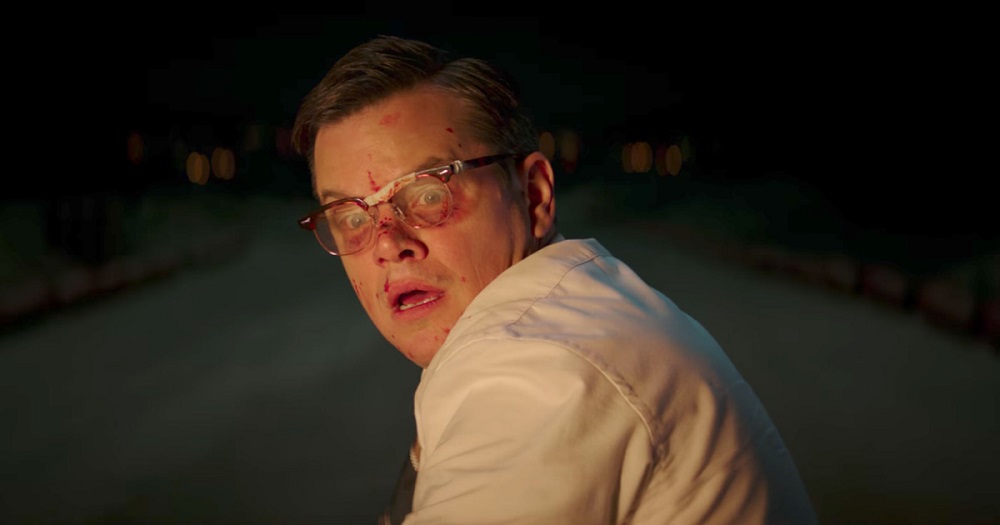 Somewhere in America lies the tiny community of Suburbicon. It’s been roughly a decade since WWII came to an end, and this little township is a bastion of progressive ideas the citizens like to believe are a template for where the United States is hopefully heading. But those beliefs are put to the test when the African American Mayers family takes up residence, a large portion of the Suburbicon’s all-White populace deciding this bit of liberal progressiveness is just one step further than what they’re willing to stand for. They decide to make life miserable for the Mayers, a large crowd forming to cause all kinds of cacophonous mischief that grows increasingly violent as the days begin to pass one after the other. 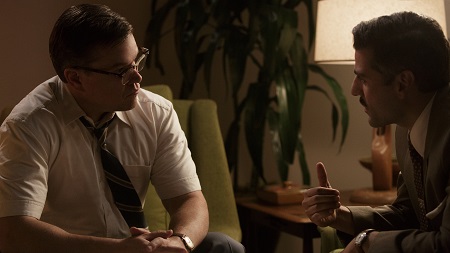 Next door to the Mayers lives Gardner Lodge (Matt Damon), his disabled wife Rose and her twin sister Margaret (both played by Julianne Moore). Also in the house is Gardner and Rose’s young son Nicky (Noah Jupe), the boy awoken by his father to the news a pair of intruders (Alex Hassell, Glenn Fleshler) are in the kitchen and want them all downstairs. Once the family is tied up, the pair proceeds to knock them all out with chloroform so they can rob in relative peace. When Nicky regains consciousness it’s in the hospital, Gardner tearfully having to inform his son that Rose is dead.

Working from an unproduced script originally crafted by Joel and Ethan Coen, director George Clooney and his frequent writing partner Grant Heslov join forces once again for the pitch black 1950’s set noir comedy Suburbicon. Masquerading as social commentary, presented as if it was the post-WWII second cousin of the Coen’s 1996 classic Fargo, attempting to mix horror and laughs much in the same way Alfred Hitchcock did with 1955’s The Trouble with Harry, the movie is sadly a disjointed mess that can never find a comfortable or consistent stride. Its laughs are few and far between, while the point Clooney and Heslov appear to be trying to make in regards to issues of white privilege and racial injustice tend to get lost amidst all the Gardner family chaos. As risky as all of this initially appears in the end none of it adds up to anything substantive, making the resultant motion picture a colossal missed opportunity.

Not that there isn’t plenty to appreciate. I like how aggressively nasty many of the characters are, especially Gardner, Clooney and Heslov going out of their way to make him as unlikable as they can. They push the noir Double Indemnity aspects to their extreme, and even when a snarling, inquisitively double-talking insurance investigator (magnificently portrayed by Oscar Isaac) shows up to try and put the cryptic pieces of Rose’s mysterious death together, calling the guy “heroic” is the last thing any viewer is going to be doing. There is a level of gruesome human depravity that’s agreeably despicable, the bleakly over the top abhorrence both part of the joke as well as key in understanding the overarching point Clooney and Heslov are attempting to make.

The problem is the two sides of this tale don’t fit on the same coin. The script purposefully makes the Mayers as nondescript as it can, Mr. Mayers (Leith M. Burke) in particular. While Mrs. Mayers (Karimah Westbrook) gets to have a terrific scene in a grocery store with oddly fluctuating prices on everyday household items, and their son Andy (Tony Espinosa) gets to develop a friendship with Nicky, the family’s patriarch basically gets to stand around and look stoic. While I get what Clooney and company are going for, it all ends up feeling much more awkward and didactic that I am sure the filmmaker intends it to. 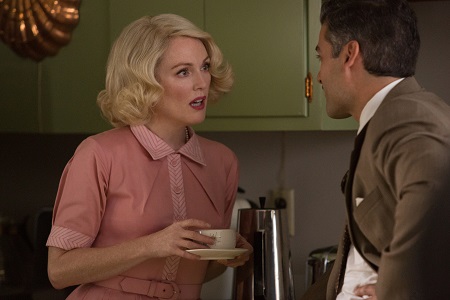 Make no mistake, in this current social and political climate where literal Nazis get to march in the streets and run down peaceful protestors and police officers who shoot unarmed Black suspects for reasons no one can even remotely understand only to end up facing virtually no repercussions whatsoever, the film’s statements in regards to racism and white privilege are certainly valid. But they’re all made in such a way their potency is diluted to the point of insignificance, something lost in translation thanks to Clooney’s moderately heavy hand. He can’t balance extremes like the Coen’s can, his more grounded, straightforward aesthetic working perfectly for something like Good Night, and Good Luck. yet ends up feeling entirely out of place here.

It should be noted that Alexandre Desplat’s (The Grand Budapest Hotel, Godzilla) score is outstanding, as is Robert Elswit’s (There Will Be Blood) suitably austere cinematography, every image composed as if he were shooting a color-soaked Douglas Sirk melodrama like Written on the Wind only with a malicious Hitchcockian spin. Clooney also stages one dynamic sequence between Damon and Isaac that’s unquestionably sensational, everything spinning so giddily out of control the ghoulish grotesqueries that transpire are repugnantly hysterical. But a couple of great scenes here and some solid performances there unfortunately do not make up for the fact so little of Suburbicon ends up resonating. The movie doesn’t work, and while I can respect the attempt that’s not near enough for me to recommend anyone out there waste their time giving Clooney’s latest a look. 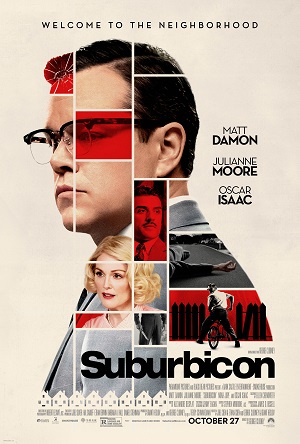