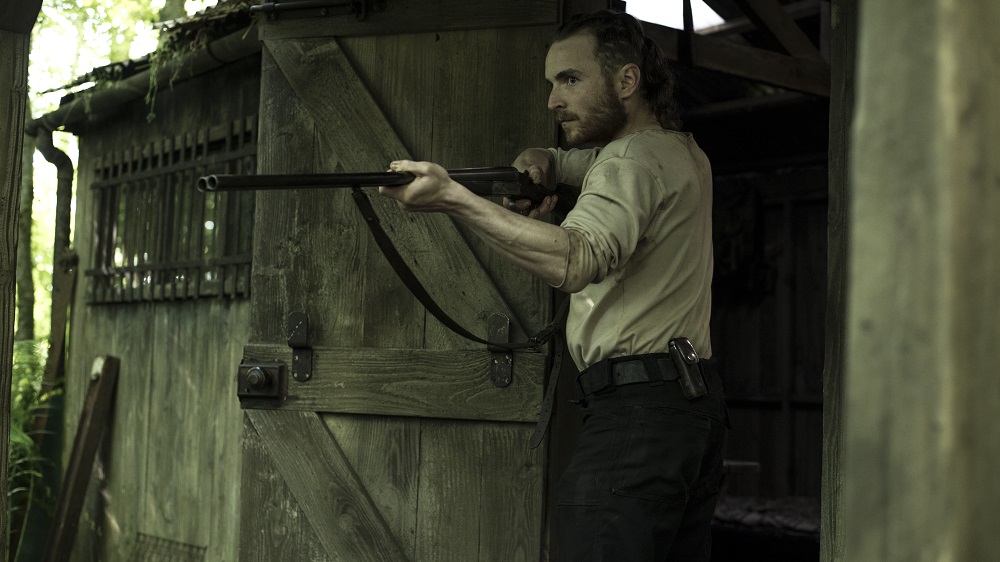 Made on a shoestring budget, writer/director Stephen Fingleton’s minimalistic shocker The Survivalist, a 2016 BAFTA nominee for Outstanding Debut by a British Writer, Director or Producer, is as terrific and as suspenseful a post-apocalyptic thriller as any I’ll likely see this year. Bleak, uncompromising and overflowing in dirty, lived-in tension, this is a grand little opus that kept me mesmerized start to finish, its final moments a haunting bit of personalized hopeful madness where tragedy, heroism, regret and resilience coalesce into a single entity. 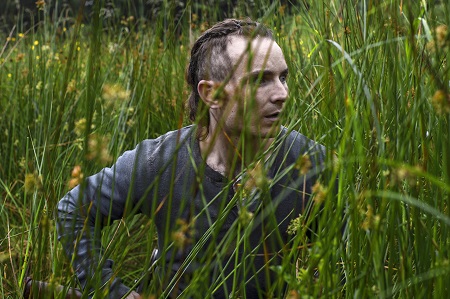 Sometime in the very near future, the world as we know it has ceased to exist. A lone survivalist (Martin McCann) lives in a secluded stretch of forest far from prying eyes. One day, tough as nails Kathryn (Olwn Fouere) and her young daughter Milja (Mia Goth) arrive on his doorstep asking for food. Understandably wary of the duo, this nameless warrior takes them in all the same, trading companionship with Milja and help tending his small farm as payment for his tentative, untrusting protection.

Trust is impossible to come by in Fingleton’s dark, disturbing human wasteland of a world, the constant threat that Kathryn and Milja could turn on their benefactor at any second, or that he might decide to end their lives to use their corpses as fertilizer for the garden, omnipresent from the first moment the trio enter one another’s lives. Then there is the answer to the question regarding his own self-enforced seclusion from other pockets of humanity, or the bands of wandering marauders killing all they come into contact with, each item an additional threat that increases the odds that ruination and death are right around the corner.

Fingleton allows room for all three characters to breathe and evolve, and while none of them say all that much it quickly becomes apparent who each of them are and what is involved with their respective decision making processes. They form an uneasy family unit, one that’s continually on guard as to what the other members might be up to. Yet this alliance becomes more emotionally affecting as events progress, building to a shattering, unimaginable conclusion where choices that are made must be both forgiven and despaired over in the exact moment they are made. 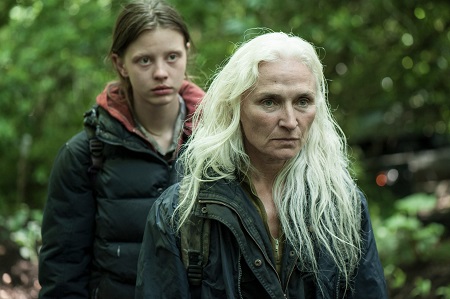 The director makes the most of what he has to work with, utilizing his primary cabin set and his isolated outdoor locations magnificently. Rising cinematographer Damien Elliott shoots the film with hypnotic restraint, the level of constant dynamism driving his camerawork overflowing in furious energy and kinetic ferocity. Equally wonderful are the performances from McCann, Goth and especially a devastatingly effective Fouere, each actor given the freedom to make their character unique to this dystopian world they are trying their best to survive in.

There is no cutting of corners, no attempts to minimize the horrors of this world or the lengths those trying to maintain their sanity will go to in order to create some semblance of connection with another human being. But there is a price to be paid for every decision, and Fingleton makes sure each bill is delivered and every check is cashed no matter what the consequences to all handling the transaction might be. Less is more where it comes to The Survivalist, the enduring power of hope the one ray of light all are searching for and only a scant few are given the opportunity to stand in the empowering warmth of. See this movie at once. 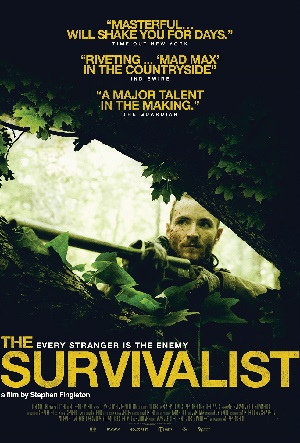