Eloise McGarry (Anna Kendrick) is the ex-maid of honor for her best friend Francie Millner’s (Rya Meyers) wedding due to the fact she was dumped by the bride’s brother Teddy (Wyatt Russell) a few short months before the event. But to prove she’s over him, as well as that her friendship with Francie is still strong, Eloise has decided to attend, heading to her reception table at the back of the room with the other outcasts and undesirables that were invited out of kindness yet never expected to attend. 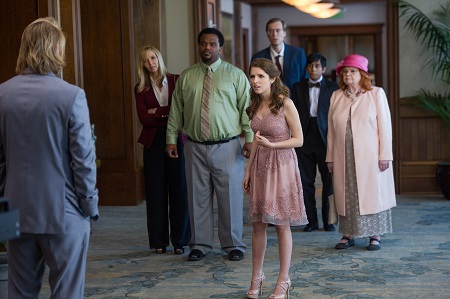 It’s here she meets Francie and Teddy’s former nanny Jo Flanagan (June Squibb), the bride’s ex-con uncle Walter Thimple (Stephen Merchant), sexually frustrated teenager Rezno Eckberg (Tony Revolori) and small town diner owners Bina (Lisa Kudrow) and Jerry Kepp (Craig Robinson). Eloise also comes into contact with the mysterious Huck (Thomas Cocquerel), a sexy Brit she assumes is a wedding crasher based on how he keeps slinking in and out of the reception as if he’s trying not to make too big an impression. As the event progresses, everyone in this group learns something new about themselves and why they’ve been sent to the table in the far corner of the room, Francie’s wedding not exactly proving to be what they imagined when they RSVP’d they would be there.

I knew very little about writer/director Jeffrey Blitz’s (Spellbound, Rocket Science) latest comedy-drama hybrid Table 19 before I entered the theatre, least of all that he was working from a story conceived by mumblecore veterans Jay and Mark Duplass. I was not expecting the film to be so dark, so uncomfortably frank about how it looked at people, their relationships, the way they interact with one another and how each deals with pain and loss in their own unique fashion. I wasn’t ready for its quick, biting wit or for it to be so ready and willing to draw blood, cutting characters I’d grown to care for to metaphorical ribbons and then leaving me to figure out on my own whether or not they’d be able to stitch themselves back together.

Granted, considering the influence of the Duplass brothers, the minds behind gems like Baghead, Cyrus and Jeff, Who Lives at Home, none of what I’ve described should be considered a surprise. These are filmmakers who treasure keeping their audiences on their collective toes, love putting up a mirror and then asking viewers to laugh and find humor in the types of everyday failures and missteps all can relate to. Events might get broad, and melodramatic silliness can sometimes overpower the narrative, but in the end the emotions, insights and situations are often heartbreakingly real, resulting in a narrative some will enjoy, others will scratch their heads over and a few will loathe with a passionate fury bordering on psychotic.

Blitz works confidently inside of Jay and Mark’s world, finding a way to make the scenario and story his own even if the Duplass influence can still be felt on every frame. While he isn’t always successful making the transitions between slapstick, satire, drama, tragedy and romance, more often than not a lot of the story beats crackle with gonzo electricity. Even somewhat silly third act declarations of love and forgiveness worked for me, everything building to a final montage that felt genuine even if getting to that point required a handful of cliché plot devices that were nothing short of clumsily contrived.

It helps considerably that the majority of the cast are excellent. Kudrow and Robinson turn in beautiful performances, and while the Kepp’s marriage is obviously troubled the way the pair react to a variety of revelations overflow in somber insights strong in their ruggedly authentic candor. Veteran funnyman and character actor Merchant steals scenes left and right, a running gag about his being mistaken for a hotel employee tasked with handling various duties at the wedding reception a wry delight. Former Nebraska Academy Award-nominee Squibb might be the best of the bunch, her ability to say so much by verbally expressing so very little put to the ultimate test, she and Kendrick sharing a number of exemplary scenes I tearfully adored.

As for the Pitch Perfect and Up in the Air starlet, while not Kendrick’s best work do not take that to mean the actress is phoning it in. Just the opposite, the talented youngster tasked with anchoring the entire picture, deftly rising to the challenge no matter how absurd the moment or artificial the emotional beat might prove to be. There’s a spellbinding sequence between her and Squibb sitting on a log that broke my heart into a thousand little piece, the bits of misfortune, tragedy, joy and happiness that all intermingle coming to life with melodious eloquence in large part thanks to Kendrick’s winning ability to convey any number of honest human emotions with beauteous ease. 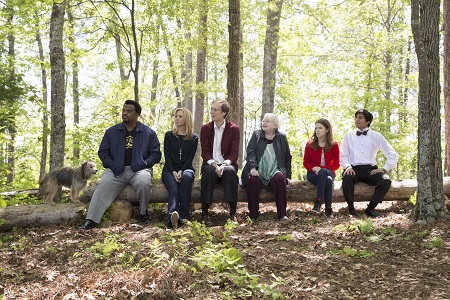 Revolori is sadly typecast in much the same sort of role he played in Wes Anderson’s superior The Grand Budapest Hotel, many of his moments just plain painful and difficult to watch, rarely showcasing anything substantive or illuminating character traits worthy of being put under a spotlight. And, as well as Kendrick and Russell play it, and they do play it well, their climax is both slightly underwhelming as well as laughably theatrical, a combination that sadly undercuts much of the bitter truth and acidic insights the script up to that point deftly puts front and center.

Even so, I liked Table 19. Kendrick anchors things with sensational aplomb, while the majority of the supporting cast turn in superlative performances worthy of short bursts of rapturous applause. As for the movie itself, Blitz keeps things moving at a jaunty clip, never lingering on any one scene for longer than is necessary. More importantly, he finds the heart beating inside of the Duplass brother’s story, allowing for a warmth and a compassion to permeate through the proceedings even when the movie itself comes close to sliding into exaggerated treacle. In the end, this is a comedy I was glad I’d made the time for, and as blind dinner dates go this is one I’d go out with again a second time with few reservations whatsoever. 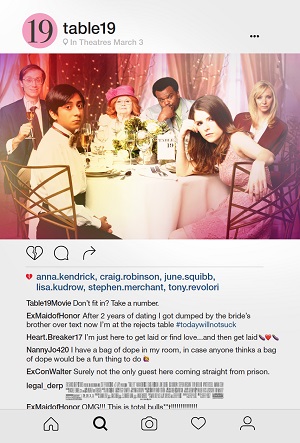