A small group of soldiers are trapped inside an abandoned Bulldog Tank as an unseen enemy attempts to get inside and rip them all to pieces. 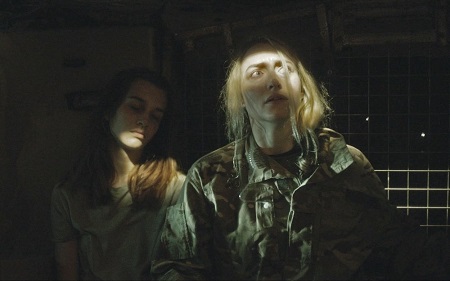 “In a dystopian United Kingdom, after a mysterious calamity has sent the world tumbling into chaos and disarray, a team of soldiers is making their way through enemy held territory with two hooded captives in tow. Needing a place to hide for the night, the unit takes refuge inside a lonely Bulldog Tank, hoping they can figure out a way to get it running and thus drive their way to safety and away from all this surrealistic madness.

A close collaborator with Ben Wheatley (who produces), having worked with the acclaimed writer/director on Kill List, A Field in England, Sightseers and High-Rise, it will likely shock no one that nothing is as it seems in Nick Gillespie’s directorial debut Tank 432. A bizarre sojourn into the unknown, the tonal shifts happen at breakneck speed, the continual shifting of gears all an illusionary tactic utilized to hopefully keep what’s actually going on a secret until the last possible second. But for all of Gillespie’s energetic handling of things his script does not hold together, and while his intentions to craft something unique and different are admirable, that doesn’t make what he’s actually accomplished any less frustrating or underwhelming.

On a positive note, the sense of bleakly chaotic unease manufactured early on is magnificent. Gillespie drops the viewer in the middle of this meat grinder, refusing to answer a single question, instead focusing on the looks of disbelief, fear and resolve plastered on the faces of the various soldiers as they attempt to survive. The collection of actors he’s assembled to help him is also a strong one, Rupert Evans of Hellboy, Agora and ‘The Man in the High Castle’ leading the charge as the questioning Reeves. Joining him for the ride are fellow familiar faces Michael Smiley (The World’s End), Deirdre Mullins (‘The Frankenstein Chronicles’), Gordon Kennedy (‘Robin Hood’) and April Pearson (‘Skins’), while the less recognizable Steve Garry and Tom Meeten round things out. The first act is a whirlwind of activity, a breathless chase sequence where up is down and down is sideways culminating in the squad finding the abandoned Bulldog and tossing themselves inside in hopes of getting out of harm’s way.

But Gillespie can’t keep track of all his psychologically demented tangents, the dots never connecting in a satisfying way. More, as unsettling as the creature design for the chief antagonists might be, it’s fairly evident that there’s more going on here than just a simple alien invasion or something similar to one, making the climactic twists far less interesting and impactful than they are intended to be. Worse, as hard as the cast tries none of the characters engaged me on an emotional level, making their collective fates matter less and less as their chances of surviving their ordeal dwindled with each passing minute. 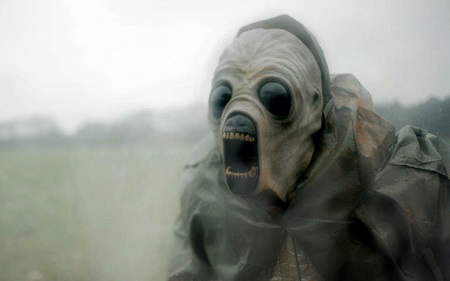 I’d talk more, but for those that are curious about the film if I go into too great a detail in regards to the specifics there’s a good chance I’ll spoil something. Thing is, I’m not altogether certain there’s much too ruin, the gig pretty much up the moment one of the captives running around in an orange jumpsuit bound and gagged suddenly has their hood removed and is able to start speaking about their personal situation. There are some great gore effects, and Smiley has a fairly sublime moment time talking back to his fellow soldiers after he solves the mystery surrounding their mission, but sadly it isn’t enough. Gillespie has obviously learned a lot from his time working with Wheatley, but that doesn’t mean he’s able to deliver on his promise this first time out of the gate, the nihilistic lunacy of Tank 432 coupled with its ridiculous implausibility leaving me coldly indifferent to the director’s high-concept debut.”

Tank 432 is weird and esoteric, but that’s pretty much all it is. Even on second glance, Nick Gillespie’s debut is just too strange and disconnected from any concrete narrative strands the film ends up almost impossible to invest in emotionally. It’s an idea looking for a reason to exist as a feature, and as such even a slew of impressive visuals aren’t nearly enough to make sitting through this one start to finish close to worthwhile.

There’s a lot of imagination and visual ingenuity driving Nick Gillespie’s debut Tank 432, but sadly there’s not a lot of anything else. It loses its way relatively early on, and maintaining interest in what’s going on and why is exceedingly difficult. As for Scream Factory’s Blu-ray presentation, technical specs are solid across the board, while special features are noticeably sparse, the disc only boasting the film’s creepy theatrical trailer and nothing else. 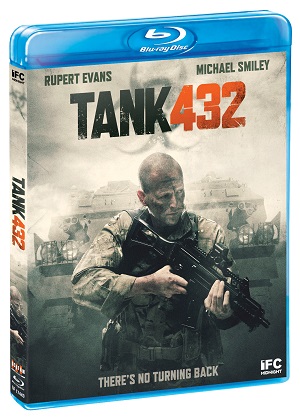