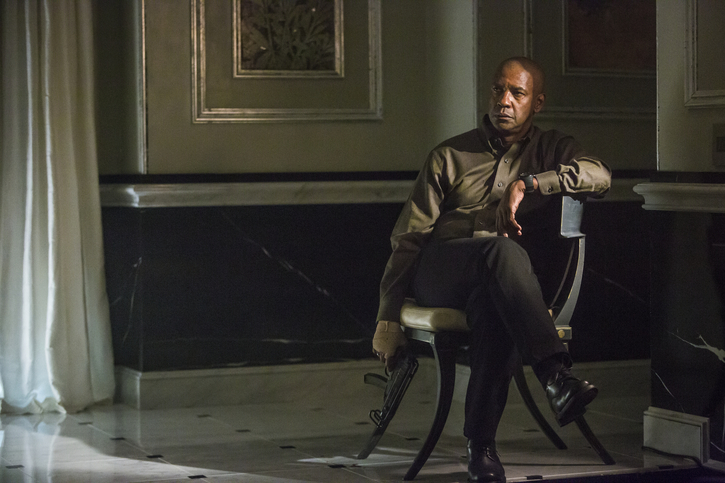 Robert McCall (Denzel Washington) isn’t all he appears to be. Smart, resourceful, caring, he’s beloved by pretty much the entire staff at the Home Depot-like Boston box store he works at daily helping customers with their various building projects. At night, he heads to a local 24-hour diner, sipping tea, reading works of great literature by the likes of Hemingway and Twain while also making friends with a lonely, if always scantily clad, teenager calling herself Teri (Chloë Grace Moretz) who’s tethered to her cell phone like it’s an electronic noose.

This nondescript everyman is anything but, and when Teri is beaten, battered and left for dead by a Russian mobster Robert decides to do something about it. What he doesn’t realize is that by doing so he’ll bring forth a storm of violence and retribution some would find unfathomable, a lethal enforcer known only as Teddy (Marton Csokas) dispatched from Moscow to ferret out what happened and make sure it never happens again. He’s as bloodthirsty as he is cold-hearted, and the only way to stop him is to meet him with unemotional forcefulness superior to his own.

To say Robert McCall can do just that and then some would to massively understate things, but then fans of the popular 1980’s television series on which director Antoine Fuqua’s The Equalizer is inspired by know that going in. If you’re in trouble, if you’ve nowhere else to turn, there is a man out there with the sort of skills that can help you. He can bring justice to places where there isn’t any, find solutions to problems the authorities can’t comprehend let alone solve. He just needed a push to become him, and that, in point of fact, is right where this story begins. 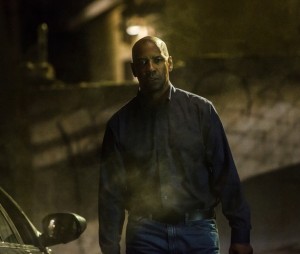 You see, McCall isn’t yet the man from the series (so memorably portrayed by a stoically unstoppable Edward Woodward), at least not yet, past demons keeping him from unleashing his talents on those deserving of being humiliated and pummeled by them to the point he’s a virtual ghost calmly sleepwalking from here to there. As posited by screenwriter Richard Wenk (The Mechanic), there is something about Teri that moves him to where he decides getting back into the game is a good idea, and once he takes action heaven help those who stand against him thinking a little bit of a moxie and a handful of bullets will be all it will take to see him stopped.

Fuqua, reteaming with Washington for the first time since Training Day, seems to be in pretty decent form, at least early on, the first third to half of the film a suitably moody, complexly dramatic assemblage of regret, recrimination and retribution that builds with pointed, deliberate purpose. He doesn’t overstate the obvious, allowing Washington to forge his character in the briefest of brushstrokes, never allowing the inherent melodrama of the proceedings to overwhelm any of the action. Things stay based in character, evolving as McCall does, and when this former man of mystery initially takes action against that first team of Russian mobsters the effect is suitably startling. 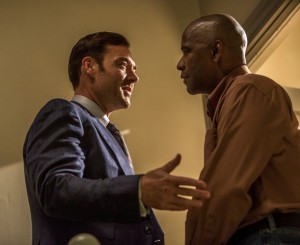 But the movie loses focus as it moves along. More than that, Fuqua gives in to his more stylistically annoying tendencies, over-editing and filling the screen with lame bits of visual insipidness that grows more tiresome and frankly annoying as things progress. On top of that, while Wenk has composed a grandly complex, inherently intriguing character for Washington to portray, he’s sadly gifted Csokas one of the more comically absurd, and thus unintentionally hilarious, villains to come down the pike in recent memory. It’s impossible to take the guy seriously (the actor’s over-the-top performance and bizarre accent not exactly helping), and for someone who’s supposed to be scary with a capital ‘S’ Teddy is about as frightening as a toddler playing with a ragdoll sucking on a lollipop.

Not that it’s a total loss. Washington is as good as ever, and as idiotic as the climax might be I can’t say I didn’t find aspects of it compelling nonetheless. Fuqua, as much as he tends to over direct and likes to visually show off, still stages some excellent action sequences, McCall turning into an brutally lethal MacGyver as he transforms his workplace into a barbed wire-laced house of horror.

Is it enough? Not really, this iteration of The Equalizer losing too much steam and not maintaining strong enough focus to make all the sound and fury mean near as much as I wanted it to. Washington’s a good fit for the character, and the initial tone he and Fuqua set is without question terrific, but none of that ends up mattering. It’s ultimately all for naught, the movie sadly feeling more like an unfortunate, moderately disappointing missed opportunity than it does anything else. 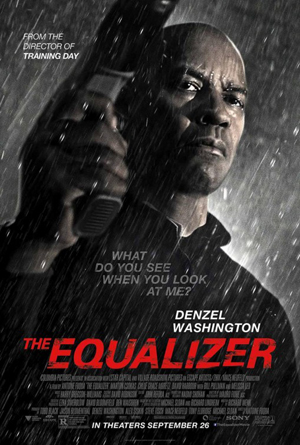