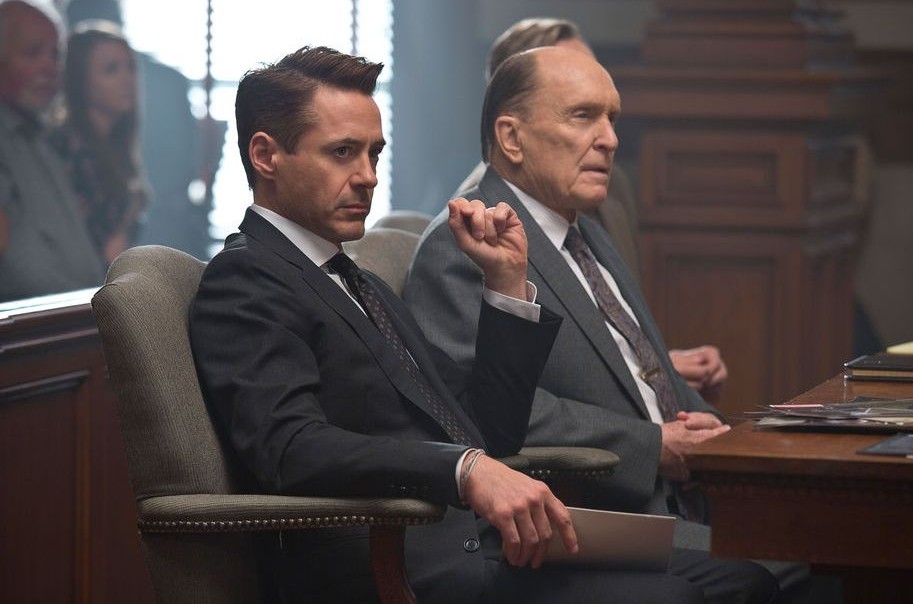 However, the script is an anemic, sprawling, unfocused mess, drowning in melodramatic schmaltz and sentiment right from the jump. As nicely acted as The Judge might be it somehow still borders on being borderline unwatchable, surviving all 141 minutes to the end close to impossible.

Smug, self-satisfied Defense Attorney Hank Palmer (Downey Jr) hasn’t been back to his small Indiana hometown in almost 20 years. He and his father Joseph (Duvall), the town’s iron-fisted Judge for over four decades, don’t exactly get along, and while he loves both his brothers dearly and misses seeing his mother it would take nothing short of a funeral to get him back in the same room with dear old dad one more time.

And that’s exactly what happens. Soon Hank is home hugging oldest sibling Glen (D’Onofrio) and youngest brother Dale (Strong) while standing in front of their beloved mother’s casket, the Judge barely able to recognize his middle son’s presence as they valiantly attempt to make small talk with strangers and friends alike during her wake. The tension in the air as the twosome go out of their way to bear the other’s presence is palpable, only the outpouring of emotion during the funeral itself enough to allow them to stop feuding and be a family for a precious few moments. 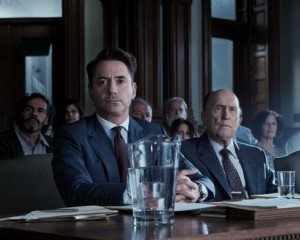 You could craft an entire motion picture out of that part of the synopsis alone (heck, This Is Where I Leave You just did, admittedly to mixed results) but director David Dobkin (a long way from Wedding Crashers and The Change-Up), who co-wrote the story with screenwriter Nick Schenk (Gran Torino), isn’t content to stop there. Instead, he takes this Tennessee Williams’ sounding scenario and throws in a legal thriller a la The Verdict or Anatomy of Murder, Joseph charged with First Degree Murder for the running down a man during a rainstorm the very night of his wife’s funeral. Hank begrudgingly stays to defend him, the pair reconciling their past troubles as the case moves forward towards summation.

Schenk and fellow screenwriter Bill Dubuque’s script doesn’t know when to quit. Not only do Hank and Joseph have issues, apparently the former was also in some way responsible for ending Glen’s burgeoning baseball career before it even got a chance to begin. There’s also the case of the woman he left behind (Farmiga) two decades prior who now has a daughter (Meester) who was born nine after he left town for college. Not enough? The big city Prosecutor (Thornton) sent to handle the case apparently despises Hank for reasons he’s happy to disclose, while little brother Dale is mentally handicapped in some way or another retreating into his own personal bubble of Super-8 home movies whenever things get to emotionally unstable or fractious.

Whew. That’s a lot, and to be perfectly honest that’s not even all of it, stuff going on with the deceased’s family as well as new members of the town’s police force also playing into the proceedings. Then there’s Shepard, bumbling and fumbling around as Joseph’s initial defense attorney, mumbling through his lines and looking a little lost as the movie ham-fistedly introduces him only to forget about the character entirely once the trial itself commences. It’s such a mish-mash of melodramatic tricks, all of which are far too familiar and freeze-dried for their own good, that keeping track of all that’s going on when and why isn’t worthy of the effort it takes to do so. Heck, I haven’t even gotten to the fact Hank is in the middle of a divorce and a custody battle, his fresh-faced little girl (Emma Tremblay) popping up every so often to flash her dimpled smile and hopefully steal the audience’s heart. 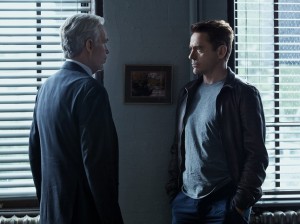 To be fair, no one here is bad. In fact, both Downey Jr and Duvall are marvelous, and while neither is working outside their mutual comfort zones they’re still firing on all cylinders. The problem is that no one is playing an actual human being but instead portraying caricatures of ones instead, making relating to any one person for any length of time more than a handful of seconds awfully difficult to do. In the case of Farmiga, her role borders on offensive, the character’s sole reason to exist is to puff up Hank’s ego in order to soften his edges and convince him he’s a better human being than he thinks he is.

Make no mistake, there is a good movie hiding inside here somewhere, a pugnacious and forceful legal thriller that desperately wants to come out and play. But in the end this is more “Matlock” than it is Anatomy of Murder, more “Boston Legal” than The Verdict. It’s devoid of subtly, puts all its cards on the table from the onset and subsequently doesn’t know what to do with any of them as it attempts to play out its hand. Not so much a disaster as it is a waste of time, one doesn’t need a jury’s declaration to know The Judge should have been sent to the gallows long before it ever went into production in the first place. 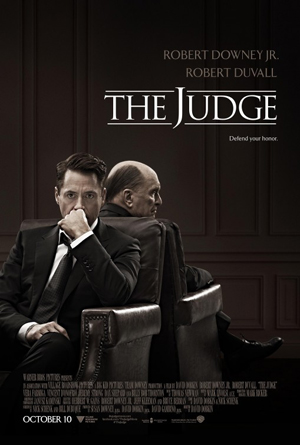