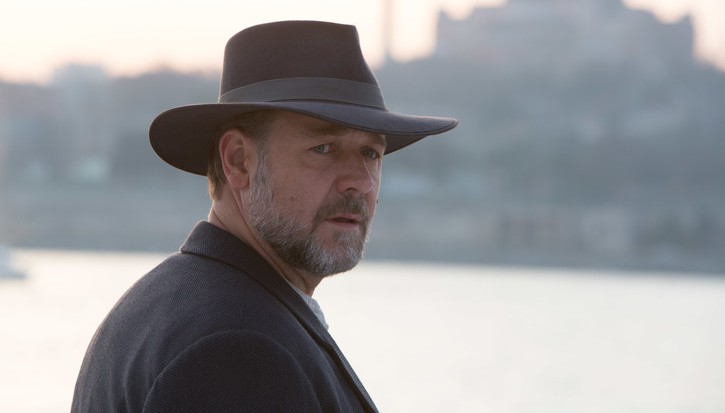 Australian farmer Joshua Connor (Russell Crowe) has come to the desolate trenches and ungodly wasteland of the Gallipoli battlefield four years after the end of WWI looking for his three sons. The soldier in charge of identifying and burying the remains of the dead, Lt. Colonel Cyril Hughes (Jai Courtney), is dumbstruck as to how this man thinks he can walk into the middle of no man’s land and find what he’s looking for, his initial thought to send him packing. But his Turkish counterpart, Major Hasan (Yilmaz Erdogan), convinces him otherwise, the pair allowing Joshua a day’s worth of time to see what he can find in order to hopefully ease his unfathomable pain.

The Water Diviner, a major hit in its home country and the winner of three Australian Academy of Cinema and Television Arts Awards, including Best Picture, marks the directorial debut of star Crowe. Showing that his time working with the likes of Ridley Scott and Peter Weir (who, it should be noted, made Gallipoli – a film this one in no small part owes something of a minor debt of gratitude to), the actor shows strong narrative and visual chops behind the camera, allowing the primary members of his cast room to breathe and evolve at the same time. It’s a striking motion picture, emotionally honest and pure, and while it doesn’t build to anywhere too terribly surprising, the film still manages to authentically tug at the heartstrings in ways that are deeply profound.

Not that this isn’t a bumpy ride at times. Crowe engages in some technical shenanigans, playing with film speeds and camera angles at some terribly odd moments, calling attention to the technique being utilized, allowing attentions to shift away from the central story. There’s also more going on within the confines of this feature than the running time can comfortably contain, Andrew Knight and Andrew Anastasios’ sprawling screenplay adding multiple subplots that, while giving the picture historical context, don’t always add up to anything substantive. The time jumps – both forward and back – are frequently jarring, a climactic “Three Weeks Later” set up of a final meeting between Joshua and a friendly Turk particularly annoying.

Yet, unlike Angelina Jolie’s muddled WWII survival tale Unbroken, Crowe never loses sight of the bigger picture, never forgets what’s at the heart of things. More than that, he makes the growing friendship and trust between Joshua and Major Hasan have weight, values it in ways that do both men, as well as the film itself, all kinds of justice. Their travails (as well as their travels) are linked in ways both physically and spiritually, the potent poignancy of where each man is headed never lost from the time the unlikely pair make one another’s acquaintance to the almost heartrending moment when they are forced to part company. 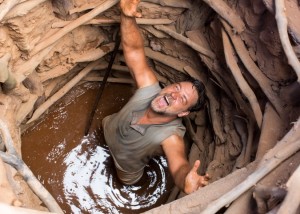 He also gets a number of superlative performances out the members of his cast, not the least of which is Erdogan’s spellbinding turn as Hasan. He dominates nearly every scene in which he appears, adding a layer of complexity that is as subtle as it is all-encompassing. Cem Yilmaz is also exceptional as the major’s trusted second-in-command, the irrepressible Sergeant Jemal, a man so used to war and conflict he can’t help but be unsettled by this supposed peace. Jacqueline McKenzie pops up in a key early role as Joshua’s emotionally scarred wife, Eliza, while the beauteous Olga Kurylenko is mesmerizing as Ayshe, a Turkish widow and hotelier, who at first doesn’t want the Australian staying in her establishment only to slowly discover that both share deep, everlasting grief brought on by the ravages of war.

It’s hard to know what to fully make of Joshua’s relationship with Ayshe’s adolescent son Orhan (Dylan Georgiades), some of their moments together having a loving simplicity that’s deeply affecting while others bristle with melodramatic stiltedness that’s irritating. Still, Crowe is smart enough to never linger on any given scene for longer than necessary, allowing silence to speak volumes and quiet introspection to pack a meaner punch than any grenade ever could. As a filmmaker, he focuses on finding truth even in the most mundane of conversations, the finer points of cricket building fast friendships between former enemies and a cup of coffee offering a kind of solace that makes unimaginable tragedy almost endurable.

The movie is superbly shot by the great Andrew Lesnie (The Lord of the Rings: The Fellowship of the Ring), while Chris Kennedy’s (Lawless) production design is ruggedly gripping, bringing to life this post-WWI world of wonder and terror rather nicely. Best of all might just be David Hirschfelder’s (Shine) understated, sensuously complex score, the veteran composer working with the likes of vocalist Lisa Gerrard to craft a devastating sonic landscape that fits things marvelously. But ultimately this is Crowe’s showcase and his alone, and as such The Water Diviner, while not without its faults, still makes for a fine directorial debut and is thus worthy of a look. 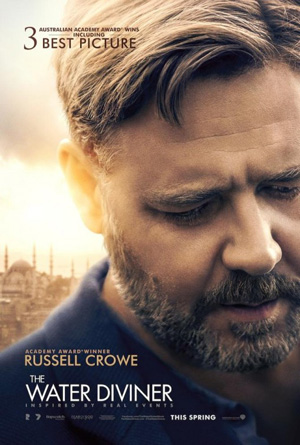