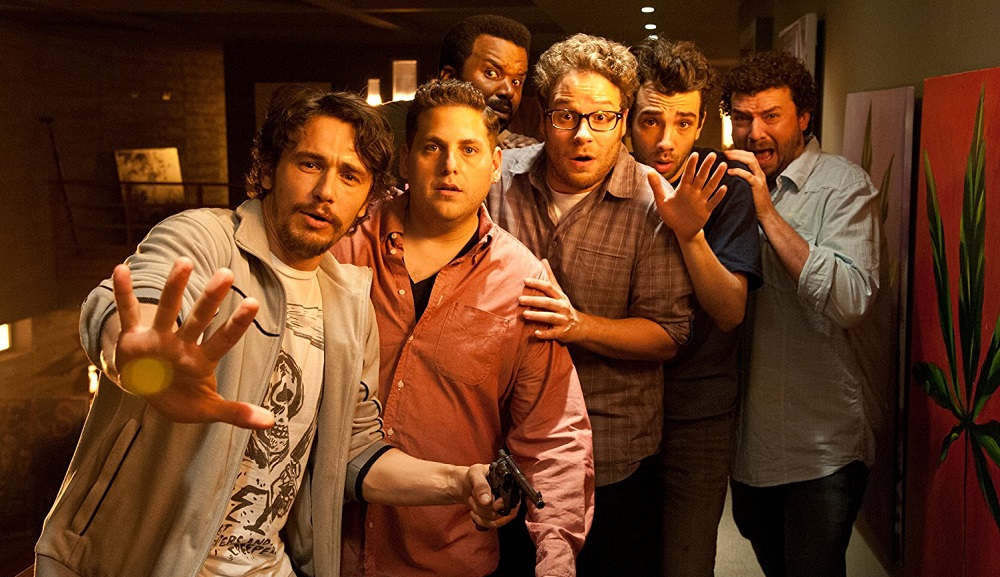 For a movie I enjoyed quite a lot, far more than I expected to, I don’t have a lot to say about the Apocalypse comedy This Is the End. Seth Rogen (who co-writes and co-directs alongside Evan Goldberg) and Jay Baruchel star as themselves, with James Franco, Danny McBride, Jonah Hill and Craig Robinson following suit, this group making up the core six who struggle to survive in Franco’s posh, personally redesigned Los Angeles mansion after events that can only be described as Biblical transform the city into a fiery, creature-infested wasteland. Stars such as Emma Watson, Michael Cera, Rihanna, Paul Rudd, David Krumholtz, Aziz Ansari, Channing Tatum, Christopher Mintz-Plasse, Kevin Hart and Mindy Kaling also appear, but most of them are dispatched early on when chaos erupts and pits of hellish doom ominously open beneath them. 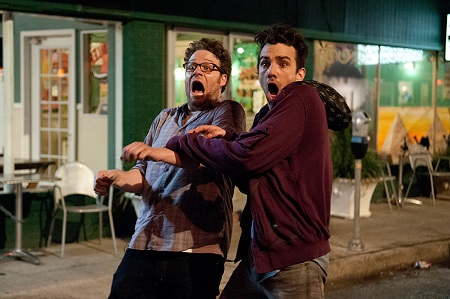 Good friends Rogen and Baruchel reunite in L.A., but after a day of smoking weed, playing video games, watching movies and, of course, smoking more weed, the pair end up going to a massive party at Franco’s, even though the latter would rather not. Once there, all sorts of craziness ensues, not the least of which is Michael Cera making a total jerk of himself and Jonah Hill getting a little too touchy-feely in his attempts to make Hollywood outsider Baruchel feel like one of the gang.

It’s diverting stuff, filled with a few solid laughs as the star-studded cast mercilessly poke fun at themselves and their perceived excesses with little regard to how it could potentially affect their nonfictional image in real life. But it is when the Apocalypse hits and all Hell literally breaks loose that things truly go crazy, the aforementioned six struggling to survive as their supplies begin to dwindle and faith in one another begins to descend into Mad Max Beyond Thunderdome territory.

I don’t want to go into any of this all that much more because to do so could potentially ruin many of the better gags, the verbal sparring between the group best experienced without any sort of introduction. What should be said is that while some jokes fall flat and certain performances can grate, overall each actor acquits themselves nicely. They mine territory that’s on one hand familiar but on another showcases a willingness to explore facets and regions of their personalities lesser, nowhere near as confident actors would have scurried away from in fear.

Rogen and Baruchel have an easygoing chemistry that makes their friendship believably complex, the film bringing their relationship to a surprisingly heartfelt close. Franco, unsurprisingly, also has some choice bits, while Hill sends up his perceived self-centered persona with a mocking gleefulness that’s delightful. Best of all is Robinson, the veteran comic stealing scenes left and right while also doling out the film’s most heartfelt sentiments without an ounce of saccharine. He’s the emotional center of the picture, and I doubt I’d have enjoyed myself near as much as I did had he not been such a vital part of the proceedings.

I’d be remiss if I didn’t give a wildly appreciative nod to Cera, his first act arc an aria of excess and egotism run amok that had me unsuccessfully suppressing a seemingly never-ending series of giggles. He’s a laugh-riot all on his own, only a mid-movie return appearance by Harry Potter alum Emma Watson coming close to achieving the same sort of unhinged uninhibited glory his work consistently produces during the film’s first act. 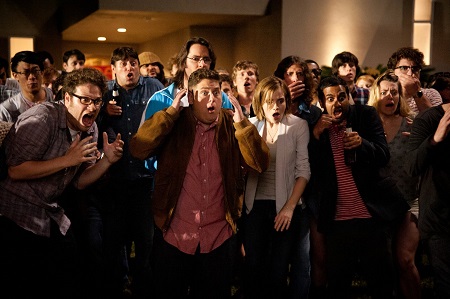 I’m not sure I get this group’s continued fascination with penises, what exactly it is that makes them so apparently hilarious lost on me. Additionally, while the role suits him McBride still quickly wears out his welcome, and while his climactic arc is sort of genius, the reasons for that have more to do with Rogen and Goldberg’s writing, as well as Franco’s smarmy self-serious genius, than it does anything to do with him. Finally, at just shy of two hours the finished picture still feels much too long, and I’d have been more than okay had the filmmakers left some of this comedic material on the cutting room floor.

But I laughed. A lot. Even better, I did so consistently, and even the parts I didn’t particularly care for contained a gag or two that, at their worst, still brought a smile to my face. In a year in which end-of-the-world comedy seems to be all the rage (the sensational It’s a Disaster already saw a release, while Rapture-Palooza, which also stars Robinson, and The World’s End are still to come) I’m happy to say This Is the End is an all-star blast first joke to last, making a matinee ticket well worth the asking price. 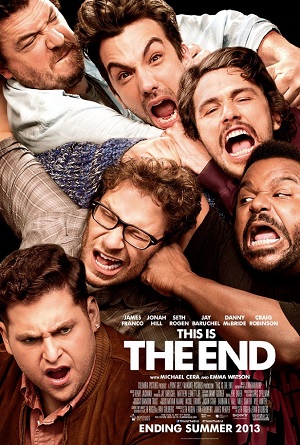