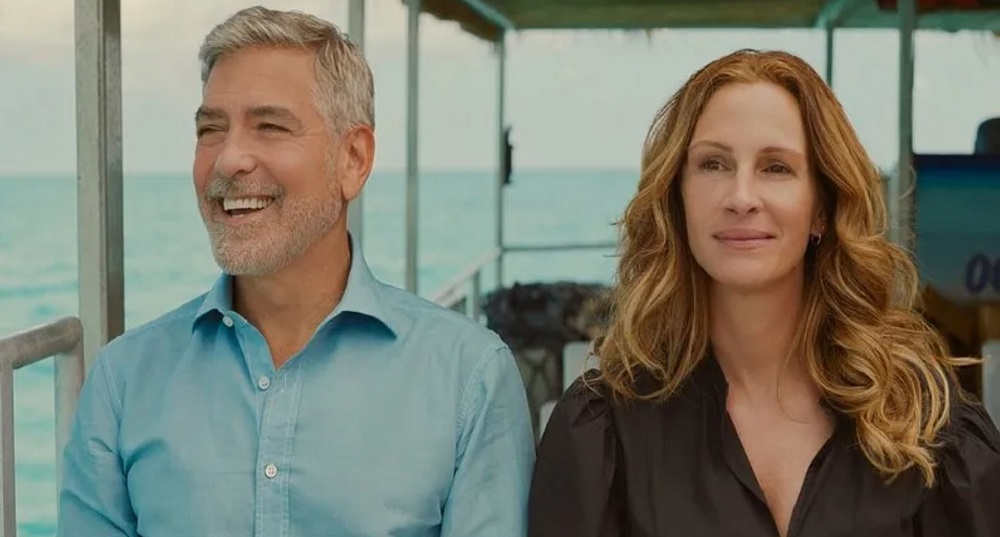 Ticket to Paradise is a perfect example of the magnetic power bona fide movie stars still have to captivate an audience, no matter how weak the material. Director Ol Parker (Mamma Mia! Here We Go Again) and screenwriter Daniel Pipski do not attempt to reinvent the rom-com wheel. They are content to follow a tried and true path, and nothing that transpires in their cheerfully forgettable film is even slightly unexpected.

But what they do have is a pair of aces. Parker and Pipski know they have George Clooney and Julia Roberts at their disposal, and they utilize them to their full potential whenever possible. The duo dominate to such a degree that it’s easy to lose track of what the core plot is supposed to be about and instead revel in the stars’ effortless back-and-forth bon mots. They’re sublime.

This is a good thing, because otherwise Parker’s latest comes across more like an exquisitely shot commercial for tropical vacations and a picturesque postcard for the otherworldly wonders of seaweed farming than anything character driven or emotionally complex. It’s as narratively thin as anything I’ve seen in 2022, and even at a briskly paced 104 minutes, there’s barely enough content to fill the running time.

After graduating from a prestigious law school, Lily (Kaitlyn Dever) and her best friend Wren (Billie Lourd) head to Bali for a tropical vacation. Just over a month later, estranged exes David (Clooney) and Georgia (Roberts) are on a plane headed for Indonesia. Lily is their beloved daughter. She has announced her intention to marry Balinese seaweed farmer Gede (Maxime Bouttier) and would love it if they could be there for the ceremony.

Call it a parental riff on My Best Friend’s Wedding as David and Georgia agree to put their post-marital acrimony aside and conspire to stop their daughter’s nuptials before she makes what they believe will be a colossal mistake. This means trying to convince Gede that his simple life as a farmer won’t keep Lily content forever, planting seeds of doubt that the pair are truly meant to be together, and even stealing the matrimonial rings before they can be properly blessed. It also forces David and Georgia to reevaluate the reasons for their own divorce, as being civil to one another is a potent reminder of why they fell in love in the first place.

Again, this all works out exactly as anticipated. Parker and Pipski are not at all interested in trying to toy with basic genre formulas. But it’s all so threadbare that none of the character connections matter, nor do any of the goofy set pieces ring with anything resembling authenticity. It’s a frothy fairy tale — a gorgeous and astutely assembled one, to be certain, but a fairy tale nonetheless. This is the kind of story that one enjoys in the moment but vanishes from memory the second it concludes.

That it does have any resonance, no matter how minute, has everything to do with Clooney and Roberts. The talented Dever is fine as Lily, and Bouttier makes suitable eye candy as the object of her affection, but they are not the ones who make the film worthwhile. Clooney and Roberts could do this sort of thing in their sleep, and they know exactly which buttons to push to keep an audience happy. Their chemistry fills the theater with its rapturous ebullience, and with so few actual movie stars of their caliber left, watching them so effortlessly work their magic is an undeniable treat.

However, Lourd is wasted in the standard throwaway “kooky best friend” role that Judy Greer used to be perpetually stuck in throughout the 2000s (13 Going on 30, 28 Dresses, and The Wedding Planner all come to mind), and if she gets typecast because of this film, that’s going to make me furious. I also can’t say I liked the almost puritanical take on marriage and gender roles the plot seemingly stumbles its way into; Lily’s intelligence and agency are strangely sidelined the closer the young woman gets to marrying Gede.

Thanks to Clooney and Roberts, I find it impossible to hate on this rom-com with any sincerity. The two stars made watching this trifle a breeze, and it isn’t as if it’s so unbelievable or its negative aspects are so egregious or offensive that its missteps aren’t still simple enough to forgive. Ticket to Paradise is more staycation than vacation, and as such it is equally as memorable. 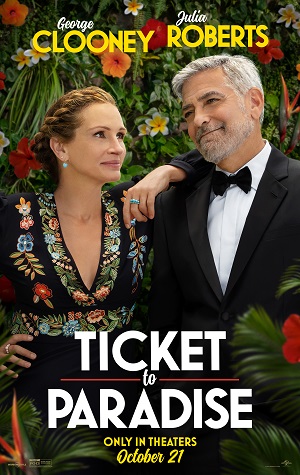