In the production notes for director Danny Boyle’s (Slumdog Millionaire, 127 Hours) latest thriller Trance there is a request to refrain from resorting to spoilers when critics write their reviews of the film. Thing is, spoilers aren’t remotely necessary, because for as twisty and as convoluted as this heist thriller set inside the art world and revolving around memory and hypnotism is, all its secrets are revealed relatively early, Joe Ahearne and John Hodge’s (The Sweeney, Trainspotting) script not exactly playing coy in regards to where things are heading.

Still, I’ll try to comply with the studio’s appeal, so all I will say about the plot is that it concerns auction house auctioneer Simon (James McAvoy) and his involvement with the heist of a priceless Goya painting under the supervision of London baddie Franck (Vincent Cassel). His memory unhinged thanks to a blow to the head during the theft, he’s sent to occupational hypnotherapist Elizabeth (Rosario Dawson) to put the broken pieces of his brain back together, this lost knowledge key to discovering what happened to the priceless piece of art.

From there, Boyle, Ahearne and Hodge start rampaging through a hazy metaphorical playground of memory, fiction, reality and fantasy that leads Simon to numerous closed doors all hiding vastly different secrets. Competing narratives overlap muddying the water, the mystery growing more labyrinthine with each passing second, the truth of whether or not Elizabeth is who she claims to be the branch on which everything perilously hinges.

It’s a heck of a lot of fun, that I cannot deny, Boyle happily playing within a sandbox he hasn’t tipped his toe into in quite some time (at least since A Life Less Ordinary, probably since his debut Shallow Grave, both not-so-coincidentally scripted by Hodge). Superbly shot by frequent collaborator Anthony Dod Mantle (Dredd, 28 Days Later), magnificently edited by Jon Harris (The Descent, Kick-Ass), the director energetically pushes the pace and keeps the audience on their toes, he and his screenwriters offering up just the right amount of information without ever fully showing their cards until the last possible second.

Thing is, as complex as all of this is, as much fun as Boyle has playing with both ours and Simon’s minds, it’s really quite easy to put to pieces of this puzzle together. I didn’t find any of this shocking, and while one of the character evolutions is somewhat imaginative I can’t say I was caught off guard by who they revealed themselves to be. It’s brutal, violent, bloody, passionate and sexual, sure, but that’s all window dressing when you get down to the nuts and bolts of it all, and at the end of the day to say that what ends up transpiring is rather by-the-numbers wouldn’t be stretching the truth particularly far.

Thankfully, the movie is so much giddily eccentric fun these flaws don’t stand out near as much as they potentially could have. On top of that, McAvoy, Dawson and especially Cassel are so damn good it becomes increasingly difficult to take your eyes off of any of them as events escalate towards their conclusion. Boyle flips the script, up becoming down, down becoming sideways, sideways doing backflips until it falls to the floor in discombobulated hysterics, the whole thing a jovial risqué mélange of sense and sensation, that fact in and of itself making the movie worthy of recommendation all on its own.

So, no, I’m not going to spoil the twists Trance offers up for consideration. But if I did, if I wanted to, I doubt it would matter much, Boyle and company delivering a fervently exhausting techno-powered modern day thriller of memory and regret that makes up in energy and excitement what it lacks in nuance and overall surprise. 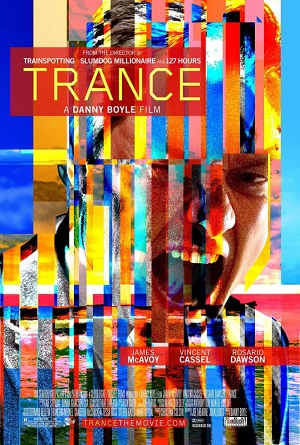