I’m fairly positive the opening minutes of Trolls World Tour gave me a cavity. This would be bad under normal circumstances, but considering we’re all self-isolating and that dentist offices are only open for dire emergencies, this might end up being more painful than normal.

All kidding aside, this sequel to 2016’s box office smash Trolls is a bit better than its predecessor. While it doesn’t offer up a song as infectious as the Oscar-nominated “Can’t Stop the Feeling,” the message at the heart of this follow-up is rather wonderful. More importantly, this second chapter in the adventures of the excitably bubbly Queen Poppy (voiced by Anna Kendrick) and her down-to-earth BFF Branch (Justin Timberlake) has a terrific ending that almost makes up for the myriad of storytelling shortcomings that fill the majority of the film’s 91-minute running time.

Emphasis on the “almost.” I still found sitting through the first hour of this one to be awfully tough. The colorfully rambunctious nonsensical mayhem was nearly more than I could handle. This sequel rarely allowed me to catch my breath. It even more seldomly put anything that was happening into coherent perspective. Like some unhinged combination of Looney Tunes, a Tex Avery short, a Disney Silly Symphony and the worst aspects of late 1990s, early 2000s Nickelodeon Channel cartoons, the headache I developed while watching it was no laughing matter.

Then, with roughly maybe 30 minutes to go, something strange, borderline magical happens. Director Walt Dohrn and co-director David Smith, along with their five credited screenwriters, allow the action to come to a dead stop. They showcase a moment of clarity between Poppy and Branch that speaks volumes as to the differences between saying you hear what someone is telling you instead of taking the time to listen to them with both ears wide open. It’s honest and authentic, righting the proverbial ship and allowing the film’s eventual climax to palpably twang the heartstrings in a harmonious way that otherwise never would have happened.

The plot, which thankfully there isn’t too much time to think about in any detail, concerns Poppy and Branch going on a quest to save musical harmony when they discover rocker troll Queen Barb (Rachel Bloom) is out to erase all other music save Rock and Roll. To do this, the pair must unite the remaining troll kingdoms (Pop, Country, Classical, Funk and Techno) if they are going to succeed, while also overcoming a variety of additional obstacles along the way. Yodeling, K-Pop, Smooth Jazz and Reggaetón get into the action as well.

That’s pretty much it, and unsurprisingly Dohrn and Smith use this scenario as an excuse to unleash so much brightly colored phantasmagoric razzle-dazzle it’s hard not to wonder if those involved with animating and storyboarding this escapade might have been partaking in psychedelic substances while they did so. It’s all so frenetic and narratively discombobulated keeping track of what was happening when and why was next to impossible. Worst of all, other than Poppy and Branch, the remaining characters rarely getting an opportunity to resonate in a meaningful way.

Yet some of the voice casting is still inspired. Realizing it was Mary J. Blige and George Clinton portraying the Queen and King of Funk brought a pretty big smile to my face, while having Ozzy Osbourne around as Barb’s forgetful, monosyllabic rocker father King Thrash is admittedly amusing. Best of all is Sam Rockwell as four-legged cowboy troll Hickory. He offers up sage advice to both Poppy and Branch just when each of them needs it the most, a twist involving his character undeniably absurd yet still goofily amusing enough I might have chuckled aloud when the big reveal occurred.

Then there is the ending. It works. There’s not a lot more to add. I loved the message that was being imparted to the audience and I was perfectly satisfied with the way the filmmakers delivered it. While this isn’t enough for me to give Trolls World Tour a standing ovation (let alone even a polite clap of melodic appreciation), I will say it did allow me to value this sequel far more than I did its unbearable predecessor. That’s something, I guess; what that “something” might be I leave for you to decide. 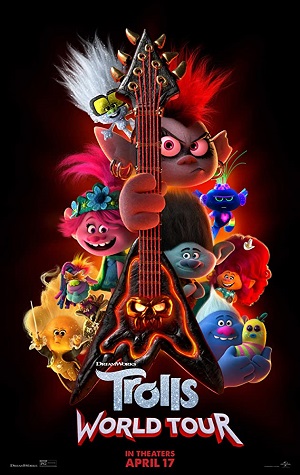