Obnoxious title certain to make 13-year-olds giggle like mad at its utterance, writer/director Matthew John Lawrence’s Uncle Peckerhead is somewhat oddly endearing. I find this strange because, the film’s gross-out makeup effects and purposefully juvenile humor notwithstanding, there is an endearing human quality to this over-the-top shock-fest that admittedly took me by surprise.

There’s honestly not much in the way of plot. Judy (Chet Siegel), Max (Jeff Riddle) and Mel (Ruby McCollister) are ready to take their Punk band “DUH” out on the road for their first tour. Problem is, less than a day before they are set to happily leave their van is repossessed by angry unpaid creditors. Undeterred, they print up a stack of flyers asking, “Can we borrow your van?” and plaster it on windshields throughout the city, hoping for a positive response.

Not only do they find someone willing to offer assistance, he’d also love to join them out on tour and be their roadie. Calling himself Uncle Peckerhead (David Littleton), “Peck” for short, he’s practically as excited as they are to hit the road. Judy initial wariness over his intentions aside, as long as DUH supplies the gas and buys a few meals, Peck’s all-in as far as helping this trio see their dreams of musical stardom realized.

There’s a reason this stranger is so exuberant about leaving town and joining DUH on this adventure. Turns out, at midnight of every night Peck transforms into a flesh-eating monster for 13 straight minutes. While Judy was certainly suspicious when he volunteered to be their roadie, even she never could have imagined this was the secret he was attempting to try and conceal.

Initially I found Uncle Peckerhead to be difficult to engage with. Judy rubbed me a little the wrong way for some reason, and the humor felt forced and not to my mind particularly funny. The initial meet-cute between DUH members and Peck came across as stilted and a bit stiff, and the thought that I was going to have to spend another 80 or so minutes with these characters wasn’t entirely appealing.

But once the group hit the road, after they played their first gig at a rundown club where everything goes wrong and all hope for the band’s success appears to be lost, a strange thing started to happen. Siegel’s performance started to win me over, while Riddle and McCollister looked to have all the makings of becoming a terrific pair of comedic supporting players I could get excited about. Most important, Littleton began to shine as Peck, the scene revealing his gluttonously monstrous side a blood-splattered delight.

From that point forward Lawrence’s script hit the mark far more often than it missed it, building its characters and the bizarre predicament they all found themselves in with increasingly amusing imagination. The relationship between the bandmates crackled with beguiling electricity, their collective excitement as their tour begins to meet with increasing success as they travel from city to city undeniably infectious.

But the heart and soul of the story is how Judy and Peck slowly learn to interact with one another. They are the ones who make all of this work as well as it does. She’s understandably wary of him, he’s a monster who eats people, after all, but his pursuit of DUH’s friendship and camaraderie just as noticeably appears to be completely genuine. He wants human connection, and he believes he’s found it with Judy, Max and Mel.

Is it all a little rough around the edges? Certainly. On more than one occasion do the project’s low budget roots show through. But that devil-may-care enthusiasm went a long way towards amplifying my enjoyment. Even when things didn’t connect as nicely as I wanted them to (or even when they fell completely flat on their face), I was having so much fun watching all this madness play out I honestly didn’t mind

Lawrence keeps things moving at a jaunty pace, keeping his focus on the relationship between DUH and Peck as he should. A couple of ham-fisted gags failing to connect aside, the climax is a total joy, the last couple scenes, the final one in particular (courtesy some perfectly placed sound effects coupled with a wide-eyed look on Siegel’s face that’s divine), connecting marvelously. All-in-all Uncle Peckerhead is something of a gleefully gory hoot, and even if I didn’t lose my head over it that doesn’t make the film any less worthwhile. 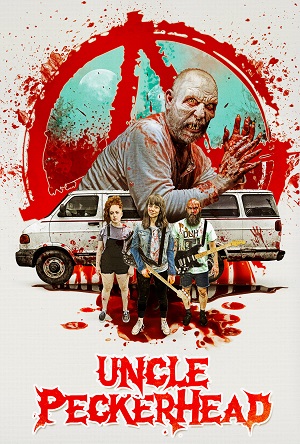