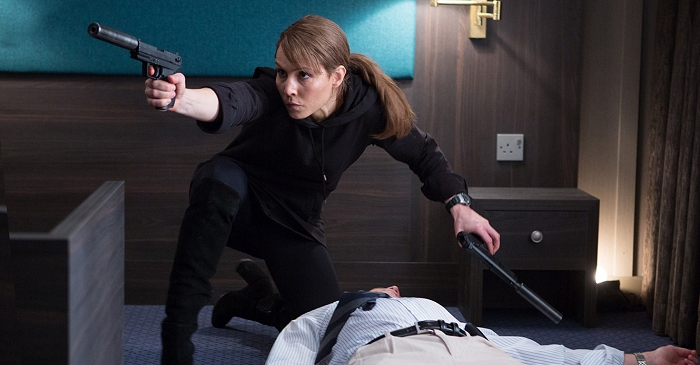 Alice Racine (Noomi Rapace) used to be one of the CIA’s best and brightest. An intuitive and sharp interrogator who always seems to know how to get information out of a suspect, she’s been living quietly in London for some time now, working undercover as a neighborhood caseworker trying to earn the trust and respect of various minority communities and no longer as a top flight agent out on the front lines. Alice has never been able to get over the fact she wasn’t able to break one suspect in time to stop a devastating Paris bridge bombing. As such, she’s now content to have quiet dinners with her handler Eric Lasch (Michael Douglas) and shuffle of any intelligence she does collect to British operative Emily Knowles (Toni Colette), her days stopping terrorists herself all but over. 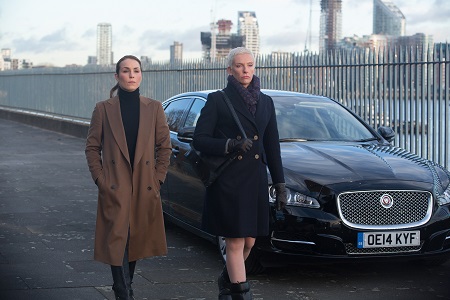 Or so she thought. The CIA has captured a courier for international terrorist David Mercer (Michael Epp). With no other high-level integrators on-site, chief of European operations Bob Hunter (John Malkovich) is forced to turn to Alice for assistance. But nothing is as it seems, and even though she’s been lying low these past months that doesn’t mean the elite agent has lost her ability to smell out a trap. Between the CIA and British Intelligence, someone is leaking information to the bad guys, aiding Mercer in his plan to set off a viral bomb somewhere in London. On the run, having no idea who she can trust, hesitatingly joining forces with former British soldier Jack Alcott (Orlando Bloom) eager to protect his city, Alice once again finds herself racing against time to stop a terror attack, and no matter what it takes she’s going to make certain history does not repeat itself.

There’s nothing fresh or original about Unlocked. The movie is basically a ticking clock spy thriller that’s equal parts a John le Carré novel and a female-driven Jason Bourne clone, things moving along at a rather decent clip as events build to just about the only logical conclusion open to a story like this. Thankfully, Peter O’Brien’s script cares a bit more about its main character than it does throwing in random twists and turns just for the sake of keeping audiences on their toes. As routine as all this might be, Alice Racine is a wonderful heroine (for that matter so is Emily Knowles, and if anything this movie could have used a little bit more of her),  watching her put these pieces together while staying one step ahead of her pursuers proving to be decent enough fun.

It helps considerably that the film has veteran director Michael Apted at the helm. The man behind pictures as eclectic as Gorillas in the Mist, Coal Miner’s Daughter, The Chronicles of Narnia: The Voyage of the Dawn Treader, the WWII spy thriller Enigma and an actual James Bond adventure in The World is Not Enough, not to mention documentaries 21 Up thru 56 Up and all the acclaimed entries in the series produced every seven years in-between, the man is an accomplished craftsman who knows his stuff. In this case, things are handsomely produced, efficiently shot by George Richmond (Eddie the Eagle) and crisply edited by Andrew MacRitchie (Doomsday). Things move along with crackerjack precision, and while the climax to this tale is hardly shocking, it’s still nicely choreographed which allows for a least a modicum of well-engineered tension to enter into the proceedings.

As nice as all that sounds it isn’t like this effort isn’t without its more annoying shortcomings. For someone who prides herself in staying one step ahead of her adversaries, Alice is laughably quick to trust a people who enter into her circle seemingly out of nowhere, one double-cross so foregone it might as well come with its own blinking neon-lit “bad guy right here” sign. I also can’t say I was blown away by Bloom, his performance so over-caffeinated I can’t begin to say how happy I was that his time being involved in the story was relatively short. As for Douglas, he’s basically delivering a slight variation on a similar character he portrayed in Steven Soderbergh’s Haywire, while Malkovich gets to playfully toy with a few choice one-liners while doing precious little else. 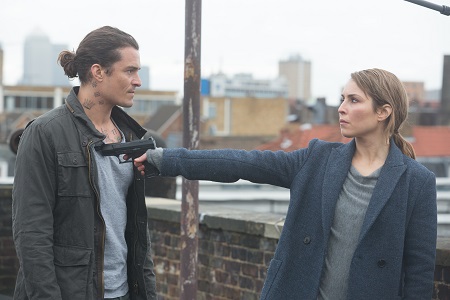 But Rapace is excellent as Alice, the original Lisbeth Salander bringing the same sort of energy, emotion and gravitas to this that she brought to The Girl with the Dragon Tattoo. There is a depth to her performance that’s heartfelt and naturalistic, the enduring pain she feels from what she views as her failure in Paris authentically realized, her determination to ensure nothing like that happens again equally so. I loved watching Alice regain her form, re-find her bearings as an elite spy, Rapace finding layers inside the character O’Brien’s script only seems to hint at but not seem interested in exploring in any kind of detail. She’s wonderful, and it’s something of a pity that this film is barely getting a release because part of me would love to see her bring Alice back to the screen for a second adventure that’s sadly never going to happen.

Colette is also first-rate, making the most of her severely limited screen time, even taking part in some of the bullet-riddled fireworks with a passionate fury that had me giggling in joyfully amused delight. I was also more than pleased with the film’s epilogue, Apted and O’Brien bringing things full circle in a way that fit Alice perfectly while also added an unexpected jolt of violent retribution I admittedly did not see coming. As for the rest of Unlocked, while far from the sharpest cerebral spy thriller I’ve ever seen, it’s safe to say still I enjoyed watching things play themselves out to conclusion, this journey behind the espionage looking glass one I’m glad I took. 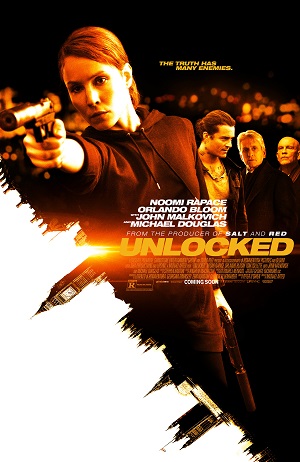