Kris (Amy Seimetz) is abducted by a silent thief (Thiago Martins), drugged with some sort of small worm that makes her follow his every command. After losing her job and discovering her home has been mortgaged to the hilt and her bank accounts emptied, in a sickly daze she ends up at the tent of some sort of scientist (Andrew Sensenig) who removes a gigantic parasite from her abdomen and implants it into a small pig. Later, after her recovery, Kris meets Jeff (Shane Carruth), the pair inexplicably drawn to one another almost as if they’ve lived facets of one another’s lives.

That’s my overly simplistic description of what is going on inside Carruth’s Upstream Color, his long awaited follow-up to his critical and cult favorite Primer. For comparison, here’s the synopsis as presented inside the film’s production notes: “A man and woman are drawn together, entangled in the lifecycle of an ageless organism. Identity becomes an illusion as they struggle to assemble the loose fragments of wrecked lives.”

Got that? Yeah, neither do I, and I watched the darn film two times in quick succession. The truth is that Carruth has crafted an elliptical and metaphorical tone poem that makes Primer look like See Spot Run, and for all those who’ve seen the director’s spellbinding indie debut you know how plainly ludicrous that statement sounds. There are psychedelic worms, overlapping pieces of dialogue, sentient piglets, mysterious blue flowers and all other sorts of bizarre bits of humanistic mayhem, all of it in some way or another connected to Henry David Thoreau’s Walden in ways I’m still attempting to figure out.

At the same time, the movie is so well made, so impeccably composed, so beautifully acted by Seimetz, it is impossible to dismiss it in any way whatsoever. What could easily be thought of as nothing more the imbecilic prattle composed by a self-indulgent filmmaker caught up in his own hype, Upstream Color manages to dig its way inside the psyche like nothing else I’ve seen this year. Carruth spins a hypnotic web that I got caught within, and no matter how indescribably crazy things became I was continually fascinated to see where it was the director was going to go to next.

This is pure cinema for the sake of pure cinema, and I’m not sure Carruth means for audiences to make coherent sense of it all (if that’s even possible). The disconnected nature of events and the way they ramble, shamble and collide into one another is both random and preordained, making the climactic moments when piglet meets man all the more indescribable.

I should say more. Heck, I feel like I need to say more. Problem, right now at least, I still haven’t the first clue how to proceed. Carruth’s film refuses to be diluted down into digestible platitudes. In some circles it could probably be construed as nonsensical prattle. In others, it will more than likely be considered a masterpiece. For my part, I look at Upstream Color as a vital cinematic achievement that needs to be seen, dissected and discussed even if I still can’t say if I actually enjoyed watching of it. Make of that what you will. 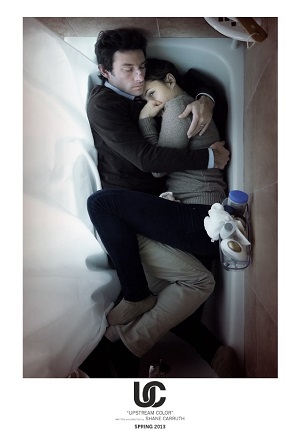