“All I can think is when someone is that lonely or that angry they can learn to hide it. But inside, it never dies. It just stays there. Eats away at you. Until one day, you have to do something about it.” 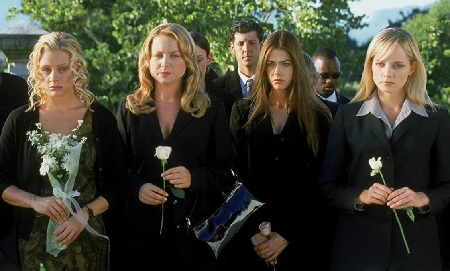 Former high school mean girls Kate Davies (Marley Shelton), Paige Prescott (Denise Richards), Dorothy Wheeler (Jessica Capshaw), Lily Voight (Jessica Cauffiel) and Shelley Fisher (Katherine Heigl) are being stalked by an unknown assailant, their murderous stalker sending them chilling Valentine’s Cards to both scare them as well as malevolently foreshadow how it is they are going to die. Kate’s on again-off again boyfriend Adam Carr (David Boreanaz) attempts to add as much moral support as he can, while grizzled police detective Leon Vaughn (Fulvio Cecere) is all but certain the five girls did something to someone in their past that has now lead to him becoming nothing less than a total psychopath.

Released at the tail end of the slasher horror boom brought on by Wes Craven’s 1996 classic Scream, director Jamie Blanks’ Valentine is a genre throwback to the more straightforward, less anachronistically meta efforts of the 1980s, especially 1981’s My Bloody Valentine and 1980’s Prom Night. It was the director’s follow-up to his surprise 1998 hit Urban Legend and as such big things were expected. But instead the film received a catastrophic critical reaction and only made a minor dent on the box office, genre fans choosing to stay home instead of heading out to the theatre in order to give this holiday-themed suspense flick a look.

Somewhat strangely, the film has managed to achieve a minor cult following over the years as well as a modest critical reappraisal. While not without its issues, most of them having to do with pacing and narrative focus, Blanks’ opus was honestly slightly ahead of its time, the picture’s four credited screenwriters reworking author Tom Savage’s novel quite significantly in order to give it a decided feminist bent that was moderately ahead of its time. The friendship between the women is surprisingly complex and authentic, as is the emphasis on the almost overwhelming misery the search for love in modern society can oftentimes entail. There is a haunting melancholic sadness running through the story that’s honestly quite affecting, Capshaw and Richards both having a couple of choice moments where their anger, dissatisfaction, disappointment and depression over how both men and at times their own female friends frustratingly view them palpably authentic.

It’s the slasher elements where Blanks’ film is decidedly hit-or-miss. A few of the sequences of the masked madman stalking his prey are undeniably effective, most notably an opening set piece inside a medical school morgue and a visually dynamic, Giallo-esque stunner at an art gallery. But there are a number of other moments where the pace just stops cold as the killer goes after random nobodies I couldn’t have cared less about, while the climactic moments at raucous Valentine’s Day party fall oddly flat save for a bravura moment involving a power drill and a secluded hot tub. Yet the highs do outweigh the lows, and for fans of the genre Blanks’ emphasis on crafting reasonably complex characters is nothing to be scoffed at.

Personally, I can’t say Valentine did a lot for me back in 2001. But it’s a movie that has definitely grown on me over the years, and at this rate in another decade all of my hesitancy to embrace this horror effort with open arms might disappear entirely. As for Scream! Factory’s Blu-ray presentation, it’s close to stunning, and for fans of the film this is one disc they’ll want to add to their personal libraries right away.

Thrill of the Drill – Interview with Denise Richards (9:41)

Shot Through the Heart – Interview with Jessica Cauffiel (23:03)

Now this is how you manufacture a “Collector’s Edition” of a genre favorite! Holy cow does this disc come packed with extras. It’s an insane amount of material to sort through, pretty much all of it, especially that magnificent “Behind the Scenes” feature, worthy of multiple looks whether you’re a fan of the film or not.

Jamie Blanks’ Valentine has aged rather well. A movie I didn’t care for at the time of its release, I now see a lot more of merit in this slasher throwback than I admittedly did back in 2001. It still doesn’t entirely work, and the fact it shuffles its talented primary cast to the sidelines to focus on extraneous, meaningless characters during its climactic act is frankly rather annoying. But the feminist spin of his horror effort was refreshingly ahead of its time, and Marley Shelton is a wonderful “final girl” who deserved to become a bigger star. Scream! Factory’s Blu-ray release of the film is, in a word, magnificent, making it one of only a handful of catalog releases labeled as a “Collector’s Edition” that’s both worthy of the designation and the purchase price that comes along with it. 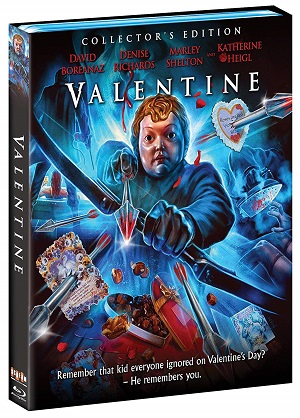