Valerian and the City of a Thousand Planets (2017)

It is the 28th century. Major Valerian (Dane DeHaan) and Sergeant Laureline (Cara Delevingne) are interplanetary special agents tasked with maintaining law and order in human territories throughout the galaxy. After a daring rescue of a rare, endangered creature inside an intra-dimensional marketplace, the pair is ordered by the Minister of Defense (Herbie Hancock) to head to the space station Alpha, a massive installation that houses over a thousand unique species of life, all of them living together in symbiotic harmony.

Something horrible is growing at the center of the station, a mysterious force that could destroy all who live there. After Commander Arun Filitt (Clive Owen) is abducted by a strange, unidentified alien race, it is up to Valerian and Laureline to both bring him home safe as well as learn as much as they can about this nondescript danger threatening Alpha. But the truth they discover is a so much more expansive and terrible than any they could have imagined, the two special agents forced into a corner where doing the right thing will have unimaginable consequences for, not just the space station and the civilizations living aboard it, but the entire universe as well.

Based on the acclaimed French comic book series Valerian and Laureline by Pierre Christin and Jean-Claude Mézières, Luc Besson’s Valerian and the City of Thousand Planets is an obvious labor of love made by a filmmaker with an exquisite eye for detail, an ability to stage action like few others can and a tendency towards juvenile excess bordering on obnoxious. The movie is equal parts profound and ponderous, so far ahead of the curve as far as gender and race are concerned only to move aggressively backward on those very same fronts, sometimes within the same scene. A convoluted eye-popping mess that never feels as long as its 137-minute running time yet could easily shed a number of pointless subplots and not lose a bit of its cohesion, Besson’s adventurous and risky adaptation is as uniquely perplexing a misfire as anything 2017 has seen, and for my part I can’t wait to see it again.

The first half hour is glorious. Starting with the mesmerizing opening credits depicting the evolution of the International Space Station into the gigantic mass of a thousand planets that will become known as Alpha and leaves Earth’s orbit to travel the galaxy, and culminating with a wickedly devastating prologue featuring a lithe, angelically reptilian alien race at one with their environment, Besson immediately immerses the viewer inside a visually resplendent sci-fi landscape unlike anything I’d seen before. But more than just an exquisite use of special effect and immersive 3-D camerawork, these sequences also overflow in emotional resonance. The cumulative power of these opening montages is astounding, Besson coming close to achieving a tearful punch to the gut that reminded me of Pixar’s Up, forcing me to inch forward in my seat as I eagerly anticipated what was coming next while a gigantic mournful lump formed in my throat in the very same instant.

But then the director immediately undercuts himself and his film, delivering a tired, tone-deaf joke as he introduces Valerian and Laureline on a virtual beach. Their banter is unpleasant and childish, and the early warning signs that DeHaan, an excellent actor who has delivered superb performance in films as diverse as Chronicle, The Place Beyond the Pines and this year’s underrated mind-bending thriller A Cure for Wellness, isn’t going to be up to the task of portraying a Han Solo meets James Bond heroic rogue are immediately evident. The sexually-charged banter he and Delevingne engage in is flat, tin-eared and moderately offensive, and while I’m sure the idea is to put a satirical spin on the concept of a mildly misogynistic hero, to say there’s just not enough wit or nuance located anywhere inside Besson’s script to pull that off is understating the case mightily.

Yet, it takes the talented director all of about five minutes to right the ship, Valerian and Laureline landing on the planet Kirian to attempt a secret mission to steal back an endangered creature at the intra-dimensional Big Market. This is an astonishing set piece, one that utilizes every ounce of the film’s massive $180-million production budget brilliantly. It’s a wondrous bit of crazy, visually rambunctious nonsense and Besson orchestrates events with intricate precision. Tension ratchets up nicely, the gags are funny and the action is spectacular, so by the time the two special agents left Kirian chased by a giant slobbering dog monster I was positive the filmmaker had regained his footing and was about to show me something exceptional.

Only that doesn’t happen. Besson once again slams things into narrative reverse, delivering snippets of expositional dialogue so bad George Lucas would likely raise an eyebrow in disgust. Additionally, for as convoluted and as crazy as the plot appears to be, the actual mystery that has placed Alpha in jeopardy isn’t very interesting. Same in regards to the identity of the villain responsible for creating the mess Valerian and Laureline are tasked with cleaning up, the climactic reveal likely to shock absolutely no one sitting in the theatre. It’s all disappointingly underwhelming, especially so considering just how magnificent so much of the film’s first act proves to be.

Even so, the movie is still impossible to dismiss. Besson stages a number of crackerjack action bits, notably a phenomenal chase throughout the interior of Alpha with Valerian literally crashing between different alien worlds and environments as he attempts to catch Arun’s kidnapper. Each realm is meticulously realized down to the smallest detail even if it only appears for a handful of seconds, and even though all of it is practically 100-percent computer generated, there is a tactile feeling of depth and solidity that only helps give things an extra coat of authenticity. Besson uses the 3-D in a fashion that helps submerge the viewer inside his fantastical world, the picture equal to James Cameron’s Avatar, Martin Scorsese’s Hugo and Ang Lee’s Life of Pi in that regard.

Thing is, every time I had to focus on the two main characters, the noticeable holes in all of this started to grow bigger and become more bothersome. DeHaan is, for likely the first time in his young career, blandly forgettable, and while Delevingne fairs a lot better than her costar, the actress’s athletic physicality is sublime, Besson’s script does her no favors, shortchanging the character in ways that are close to inexcusable. As progressive as the movie might be as far as gender, race and sex are concerned, it is equally regressive on those fronts in ways previous efforts from the director, most notably La Femme Nikita, Léon: The Professional, The Fifth Element and Lucy, never were.

It’s a balancing act, one that Besson is frustratingly unable to maintain, the director falling off his tightrope on a number of occasions. He introduces fascinating side characters like a shape shifting indentured sex worker named Bubble, ebulliently portrayed by Rihanna, and then refuses to do much that’s memorable with them. He brings in a wide range of familiar faces for supporting roles, actors like Hancock, Owen, Ethan Hawke and Rutger Hauer, only to give them nothing to do. Only Alain Chabat as the googly-eyed Bob the Pirate makes an impression, the veteran French actor having an obvious blast and thankfully his enthusiasm for the character ends up being infectious.

I can’t dismiss what Besson has done here. Goodness knows, if given the opportunity I’d likely head back out to the theatre to give it another look this very second if I could. The stuff that works is breathlessly magical, the director presenting a fantastical science fiction wonderland that’s second to none. But the black hole at the center of things that are the two heroes themselves makes maintaining interest difficult, as do the screenplay’s more inane absurdities. I find that I want to like Valerian and the City of a Thousand Planets more than I actually do, even if the stuff that’s great about the film is downright extraordinary. 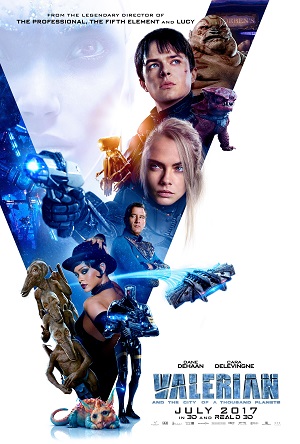