“Stop! You were singing and dancing…on a fountain?”

Here’s what I wrote about Valley Girl back in May of this year:

“Not so much a remake of Martha Coolidge’s cult favorite so much as it is a musical reinvention reminiscent of some sort of neon-colored fusion of Mamma Mia!, Rock of Ages and Clueless, director Rachel Lee Goldenberg’s Valley Girl rarely lives up to its potential. Even with Amy Talkington’s script working overtime to make the material feel current (while still retaining the original’s 1983 setting), this is a strangely inert and cartoonishly sophomoric enterprise that I found difficult to enjoy.

Happy Death Day star Jessica Rothe takes over the title role of teenage queen bee Julie Richman from ‘80s icon Deborah Foreman, while relative newcomer Josh Whitehouse steps into the shoes of wannabe rocker from the wrong side of the tracks Randy previously filled by a scene-stealing Nicolas Cage. The former is electrifying. The latter not so much. Together they showcase precious little in the way of chemistry, their star-crossed romance never taking shape in a manner that could be construed as anything resembling meaningful.

The basic story remains relatively similar to the one found in Coolidge’s original. Tired of spending every day at the mall, much to the shock of her fellow valley girl best friends Julie Richman talks about heading into the city so she can see what the kids living in downtown Los Angeles might be up to. After a chance encounter with punk rock party-crashing Randy at the home of her self-centered boyfriend Mickey (Logan Paul), this teenage suburban princess finally gets her chance to see how the other half live. Maybe, if she’s lucky, she’ll even fall in love.

There are two primary differences between this new take on the material and Coolidge’s classic. The first is a rather heartwarming wraparound story set in the present involving a forty-something Julie (Alicia Silverstone) telling the tale of her most memorable high school romance to her 18-year-old daughter Ruby (Camila Morrone). She’s just had her own heart broken and is now questioning whether or not she’s up for the challenge of leaping into the great unknown when she graduates from high school. Julie sees this as an opportunity, and while she fancifully embellishes a few elements, she’s positive her little girl will be happy to hear what she’s got to say.

The second major difference is unquestionably the most obvious one. This Valley Girl is a full-blown musical, the entire cast frequently breaking out into song and dance at regular intervals. They belt out a seemingly never-ending cadre of pop, new wave and punk classics including “We Got the Beat” by the Go-Go’s and “Take On Me” by A-ha. As for the dance numbers, they’re choreographed by Emmy-winner Mandy Moore of “So You Think You Can Dance” fame, the first one set inside a hyper-stylized, ultra-colorful re-imagining of an ‘80s California mall an undeniable standout.

So what the problem? For one thing the majority of the songs weren’t all that pleasing to my ear. While most of the cast can sing and dance rather well, I still found almost all of these various mashups to be rather dreadful. The only one on this front who comes out of this completely unscathed is a terrific Mae Whitman, portraying one of Randy’s best friends and punk rocking bandmates. She’s sensational, and if anything the movie could have used more of her, Whitman tapping into the mindset and attitude of the material with a fierce tenacity I instantly responded to.

As for the other issues, most of the critical ones I’ve already mentioned, including the stunning lack of an emotive connection between Rothe and Whitehouse. They just don’t click, and I was never invested in whether or not they’d be able to navigate through their various personal emotional minefields and figure out a way to stay together as a couple. It also does not help matters that Paul is dreadful as Mickey (and not just because his character is supposed to be such an egotistically grotesque cad), or that the film doesn’t seem to have any idea how to best utilize any of the talented three women (Jessie Ennis, Ashleigh Murray and Chloe Bennet) portraying Julie’s supposed best friends. For every high note hit with melodious aplomb there are three or four additional ones that fall egregiously flat, the sheer volume of missed opportunities mind-blowing.

Yet I cannot dismiss this new Valley Girl entirely. The bookends with Silverstone (who is delightful) are superb. Rothe is very, very good, a scene between Julie and her father (a pitch-perfect Rob Huebel) with the two sharing a quiet moment as they sit in awe of Sally Ride’s transcendent launch into space, nothing less than glorious. I want all of Maya Lieberman’s (Vacancy) spectacular costumes to be placed in my closet right this second, while production designer Theresa Guleserian’s (Like a Boss) richly detailed sets are a thing of constant beauty. There’s also a lovely cameo from one of the original’s stars at a key moment, but the less said about that, the better.

Truthfully, these positives make me even more depressed that I didn’t care for Goldenberg’s remake. There’s so much to like about the little, character-driven bits littered throughout the film, and I appreciate how she and Talkington have made Julie a much more empoweringly well-rounded character than she was in Coolidge’s original. But while normally I’d love to sit and watch her triumph over adversity, that simply wasn’t the case. Instead I found Valley Girl, like, totally disappointing, an unexpected turn of events that’s grody to the max, for sure.”

This Valley Girl musical remake was a lot easier to watch the second time around. I’m still a little frustrated by the film, but not nearly as egregiously so as I was earlier this year. Is this a recommendation? No, but I also don’t think most who would be inclined to take a look at this one will be anywhere near as disappointed by it as I was.

Other than a Digital Copy of the film there are no extra included with this release.

Valley Girl doesn’t quite have the beat, but it’s also not, like, a total disaster, either. Warner’s Blu-ray presentation is exemplary, and while the lack of special features is annoying, I’m sure fans will stay be happy to add this one to their libraries once it goes on sale for a reasonable price. 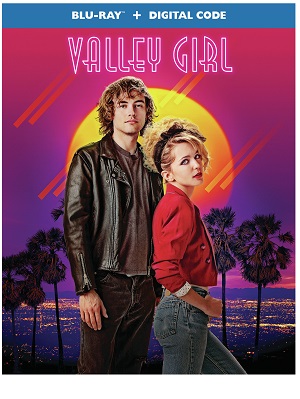