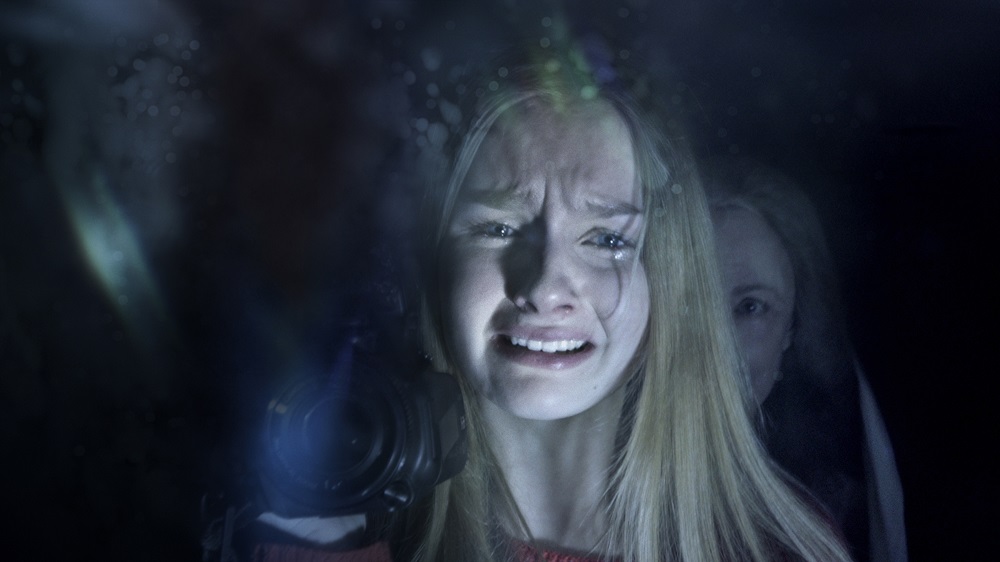 Becca (Olivia DeJonge) and Tyler’s (Ed Oxenbould) beleaguered mother (Kathryn Hahn) hasn’t seen her parents in 15 years, walking out on them when they refused to allow her to see the boy she would ultimately marry. Believing one of the reasons Dad walked out on them was Mom’s inability to deal with the past, both teenage children are eager to go into the country and meet the elderly pair after a letter arrives urging them to visit. In fact, erstwhile filmmaker Becca believes documenting her and her brother’s trip to see their grandparents, nicknamed Nana (Deanna Dunagan) and Pop Pop (Peter McRobbie), could be cathartic for their mother, taking it upon herself to discover what led to her leaving and why reconciliation has sadly proven to be impossible. 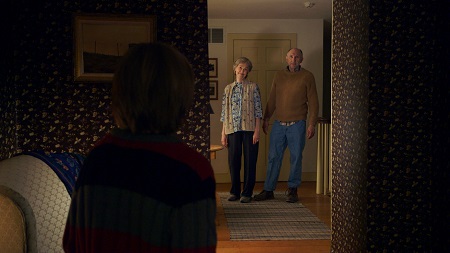 Thus the stage is set for M. Night Shyamalan’s return to suspense filmmaking The Visit, the man behind The Sixth Sense, Unbreakable and Signs unleashing a found footage thriller where nothing is what it seems and every move proves to be suspicious. Displaying a delightfully mordant sense of humor, crafting two teenage heroes who are actually fun to spend time with even when their antics turn juvenile, the movie is an invigorating chiller that builds nicely, unleashing a series of final twists and turns that are as tense as they are surprisingly emotional.

Not that Shyamalan can escape all the traps of the genre, not the least of which is the eternal why-the-heck-are-they-still-running-around-with-cameras-when-all-sorts-of-crazy-hell-is-breaking-loose quagmire that so many of these sorts of productions fail to satisfactorily solve. Additionally, the filmmaker just glosses right over as to why a supposedly loving, devoted mother would be so willing to ship her children off to see grandparents she herself hasn’t spoken to for almost half her life, that question hanging over the proceedings start to finish.

Even so, the movie is so well made, so confidently assembled and so terrifically acted this is an easy little thriller to get lost inside of. Becca and Tyler start learning believably just what kind of trouble they’re in, reacting to given moments and situations in ways that help their respective characters to grow and evolve in intriguingly naturalistic ways.  Their decisions, while sometimes having the appearance of idiocy, still crackle with the thought patterns and rationality of early teenage years, making perfect sense to them even if adults with more life experience and seasoning would likely have chosen a different path to wander down. 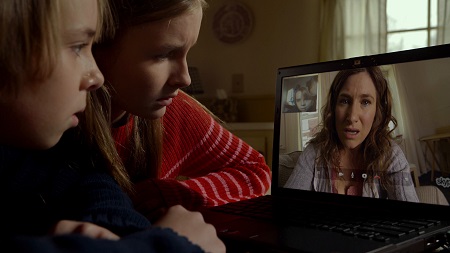 More than that, though, I just got a kick out of the gruesomely playful tone Shyamalan establishes, things playing like a whimsically knowing twist on the adventures of Hansel and Gretel only with a modern day surveillance age digital bent. Skype, YouTube and Facebook are every bit as important to the outcome as mise-en-scène, montage and dénouement, Becca’s stylistic tendencies owing as much to Errol Morris and Barbara Kopple as they do to Catfish and any random Cable reality television program. There is a “here” and a “now” quality that makes all the Grimm’s Fairy Tale stuff come across as far more inspired and original than it otherwise would have, thus allowing the scares to happen with an eloquent sincerity that’s agreeably sincere.

After so many missteps in a row, it’s nice to see Shyamalan getting himself back on track, and even if The Visit can come off as a little slight, in the end he’s still a strong enough filmmaker to remember to keep his characters and their journey at the center of the proceedings in a way that’s realistically grounded. While the set pieces impress, they are born out of circumstance and necessity, not out of thin air devil-may-care implausibility. Besides, not only does the movie have the best Katy Perry reference in recent memory, it also has more moments of pure, unabashed fright than almost anything I’ve born witness to in all of 2015. This is a good little film, and, honestly, it just might be one that only gets better the more I allow myself to think about it. 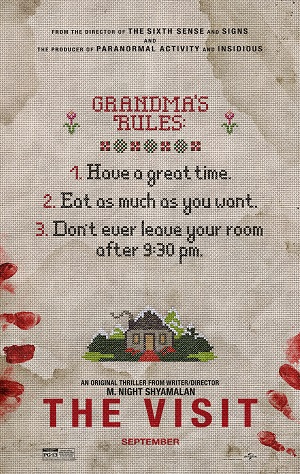