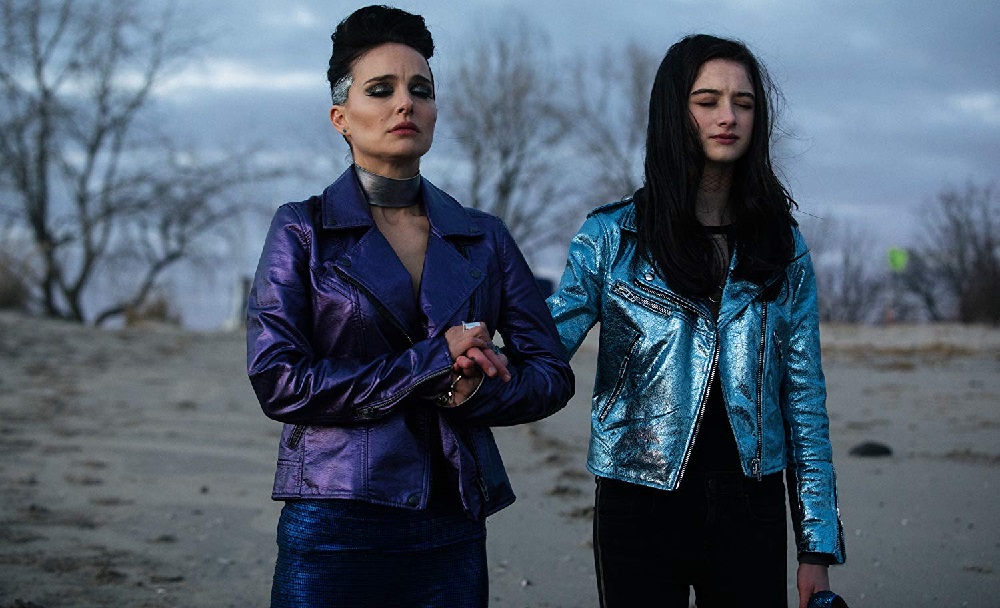 Vox Lux begins with an act of violence so sudden, so explosive, so exploitive it wouldn’t surprise me if some viewers stop watching barely ten minutes into the movie. Writer/director Brady Corbet‘s follow-up to his 2015 critical favorite Childhood of a Leader is a strange a piece of storytelling that defies easy categorization. On the surface it is the story of Celeste, a massively successful pop singer whose rise to fame can be directly tied to her surviving an unfathomable tragedy and singing a song she wrote with her sister at a memorial service. It shows how as a teenager she is groomed, taught and exploited by those around her only to flip to 17 years later where, as an adult, the ravages of fame, drugs, alcohol and a number of emotional demons have taken their toll. It is the story of her relationship with her sister, her manager and, later on, her own teenage daughter, a world overflowing in senseless violence and invasive paparazzi voyeurism all playing a part in what ultimately transpires. 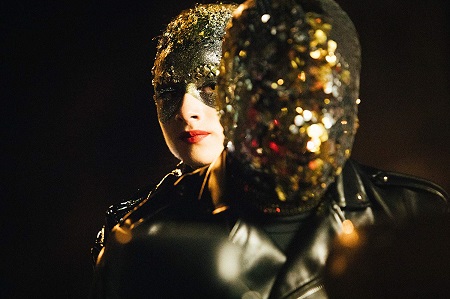 Split into chapters and narrated by a professorial Willem Dafoe utilizing a staid, deadpan delivery that’s comparable to those often found as part of a Wes Anderson opus, the first section centers on a 14-year-old Celeste (Raffey Cassidy) as she and her older sister Eleanor (Stacy Martin) are set on a path towards superstardom. The former is a survivor of a high school mass shooting, the murder’s bullet still lodged in her spine as taking it out would likely leave her paralyzed. The song she sings at the memorial for her fallen classmates and teacher becomes an instant sensation, convincing a smarmy, chain-smoking manager (Jude Law) to take Celeste under his wing in order to transform her into a pop music diva whose concerts will sell out stadiums across the globe.

Fast-forward to 2017 and Celeste (Natalie Portman) is now a grizzled veteran of the celebrity meat grinder far too young to have her own teenager daughter, Albertine (also portrayed by Cassidy), and who is regrettably estranged from Eleanor even though she keeps her sister around mainly to co-parent her kid. She’s a fast-talking train wreck who is barely able to emotionally function, the wide-eyed and virtuous girl of her youth buried under gaudy haute couture and too much eye makeup. Celeste is preparing for a comeback concert in her hometown less than 24-houra after a horrific terrorist attack in central Europe where the killers utilized masks from her debut music video released 17 years prior to carry out their heinous act. Past and present collide as she readies to take the stage, the pop superstar’s life nothing short of a morose cautionary tale only Albertine and Eleanor appear to be capable of seeing.

Like some sort of frenzied fever-dream imagined while in a hallucinatory haze, subtlety isn’t exactly this movie’s strong suit. Its observational excesses often made me feel icky and covered in grime, the ways Celeste is torn apart and dismantled bringing more than a few well-earned tears to my eyes. But the point of it all kept getting lost on me as Corbet kept dancing around his themes almost as if he was blatantly refusing to clarify what it is exactly he is trying to say. The filmmaker bounces around to so many different thematic points the overabundance of them just becomes assaultive. Also, while I appreciate the bleak starkness of the violence, there’s nothing prurient, titillating or thrilling about either mass shooting, the way these events shape things for Celeste and the other characters still felt nothing short of exploitive to my mind. It’s all ugly and vile seemingly for the sake of being ugly and vile, and because of that I found it brutally difficult to maintain interest in anything that was going on.

Yet not impossible. In large part this is thanks to the dual performances from Tomorrowland scene-stealer Cassidy as the young Celeste and also as the pop star’s teenage daughter Albertine. She’s wonderful, delivering two distinctly different portraits of youthful maturation I found striking. What’s most interesting is how the actress refuses to repeat herself as she goes from playing the younger version of the main character to transforming later into that woman’s child. Cassidy crafts two distinct personas yet it’s just as clear that they are still born from similar DNA strands. I couldn’t help but be impressed.

Then there is Portman. She’s volcanic as the 31-year-old Celeste. Portman is full-throttle from the moment she struts into the frame almost as if she’s in self-destructive pop princess overdrive and can’t wait to explode in a flash of neon glitter and shimmery diamond-like sequins the first second a nosy paparazzi says the wrong thing. But this hard-headed bluster conceals deep-rooted pain born out of unimaginable suffering and self-serving excess delivered upon a child too young to deal with it yet also much too mature to admit when she needed help. The Black Swan Oscar-winner is fearless as she burns up the screen as Celeste madly attempts to hold it together as she attempts to make it through the day in one physical and psychological piece in order to give her fans the kind of show-stopping concert performance she feels they deserve. It’s a bravura turn and one that nearly make the film itself worthy of a look all on its own, Portman’s ferocious bravado a thing of torturous beauty that’s downright incredible.

But take out the violence and the bloodletting, truth be told Corbet’s observations on the destructive power of fame, especially as it pertains to children, is hardly revelatory, and neither are his thoughts on the perils of working in the music industry where sex and drugs are par for the course. But when considered with the dual mass shootings the story’s core ideas became even more muddled and nondescript. Whatever larger all-encompassing moralization Corbet is attempting to make falls frustratingly flat, and instead of wanting to analyze in greater detail all it is he’s trying to say all I did was get angry. 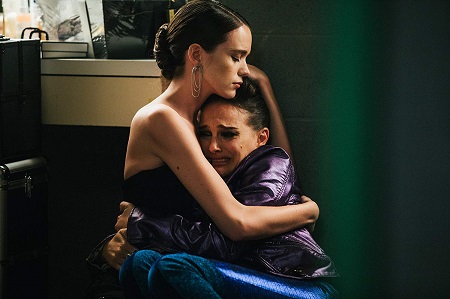 Still, Portman and Cassidy are every bit as outstanding as I’ve already stated, and the climactic concert everything has been building towards (featuring a collection of catchy electropop songs written by Sia) is undeniably spectacular. The film is unquestionably visually resplendent courtesy of cinematographer Lol Crawley (45 Years) and is edited with kinetic precision by Matthew Hannam (Wildlife). As for Keri Langerman’s (The Discovery) costumes they’re some of the best I’ve seen this year, and whether she’s clothing the down-to-earth Celeste who survived a high school massacre or the world-weary Celeste whose rowdy psychedelic extravagance has become as big a part of her persona as breathing is, all of it attains an authentic virtuosity that’s stunning.

Is it enough? I don’t think it is. But that doesn’t make me any less excited about what Corbet has in store for us all to witness in the future or think that some will be so wowed by the director’s intrepid confidence behind the camera they might not be able to find facets of Vox Lux worthy of celebrating. As much as I’d like to be amongst them, this time out that doesn’t appear to be the case, the anthems the director’s sophomore outing belts out suitably catchy if still difficult to sing along with let alone easy to remember the words to after they’ve come to an end. 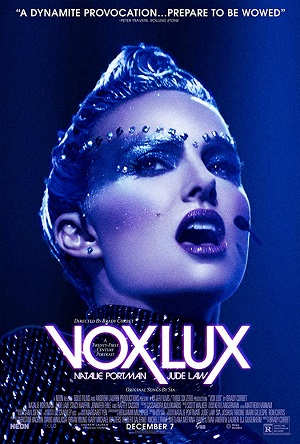