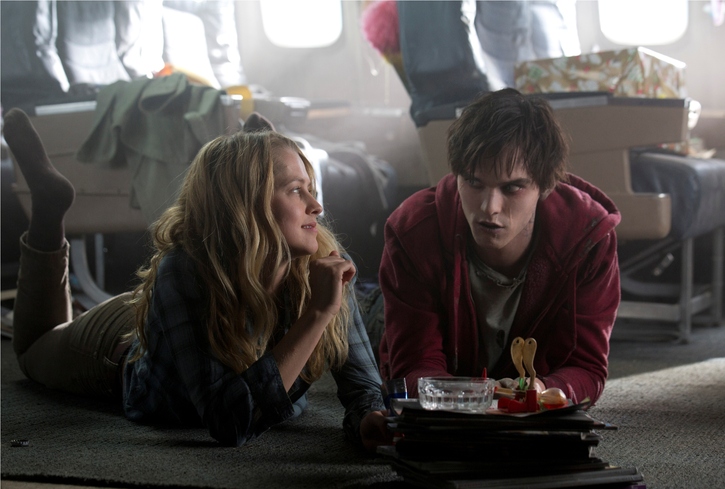 In a lost corner of a world overrun by the zombie apocalypse, R (Nicholas Hoult) is far from content. Being undead is, well, boring, all the shuffling around, the mumbled, nonsensical conversations he has with other seemingly mindless walkers like M (Rob Corddry), the inability to sleep or dream, all of it is starting to get old. Even the eating of human flesh, especially their brains, isn’t what it used to be, R longing for something he can’t quite put his finger on only knowing there had to be a better sort of existence than this one. 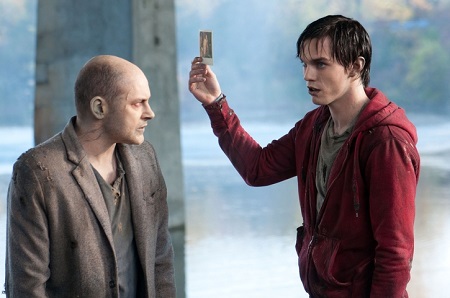 Enter Julie (Teresa Palmer). She’s a human survivor that R and his pack of zombies happen to stumble upon one lazy afternoon. But instead of devouring her, instead of letting his fellow undead snack on her brains, he decides to take her home to the dilapidated airport and the out of the way commercial airliner in which he attempts to live. Soon, little by little, bit by bit, R becomes increasingly protective of the young woman, and while Julie is admittedly initially terrified by her ghoulish benefactor soon she starts to wonder what is fueling his change and just how far this decidedly human transformation is going to progress.

Based on the best-selling book by Isaac Marion, Warm Bodies is director Jonathan Levine’s follow up to his outstanding battling cancer comedic drama 50/50 and to call it a change of pace would be something of a misnomer. While a zom-rom-com (that’s ‘Zombie Romantic Comedy’ for the uninitiated) seems a little outside the wheelhouse for the guy who made The Wackness, in reality Levine has an amazing feel for the material and an ability to develop character that fits in perfectly with the thematic elements of the movies he’s made before this one.

Being unfamiliar with the source material I didn’t quite know what to expect. The idea alone sounded rather silly, a Romero-esque homage to the world of zombies but with an angst-riddled Twilight age twist involving the most unlikely of romances, and even though I’d avoided watching the trailer just the thought of sitting through such a thing couldn’t help but make me wince. Yet somehow, someway, Levine doesn’t just pull the concept off he makes it heartfelt, honest and emotionally pure, achieving an elegant balance between the supernaturally silly and realistically grounded I greedily admired.

It starts with the depiction of R. As portrayed by Hoult, forced to develop his character with a series of grunts, growls and oddly stuttered one-word statements, this little zombie ends up being someone worthy of affection. His voiceovers give the movie a stream-of-consciousness state of being that early on is suitably hypnotic, and by the time his growing humanity begins to make itself evident (even to the other zombies stalking the airport) I was so charmed by him I think I’d maybe have followed R just about anywhere. Hoult does a grand job of making this transformation click, the lived-in nature of his performance giving the film an authenticity that’s wondrous. 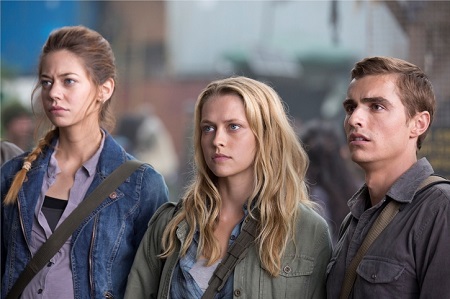 Palmer is also good, but it should be noted her character has far less to do and spends more time reacting to everything going on than she does being a proactive influence on events. Not until the final 20 minutes does she really get going and by that time things unfortunately are getting slightly more conventional and obvious than they arguably needed to be, making her ultimate transformation not nearly as weighty or as emotionally nuanced as I kept hoping it would be.

All the same, Levine does a great job maintaining a slightly off-kilter, almost tongue-in-cheek tone that suits the material. In some ways it’s the same approach he took with both 50/50 and The Wackness but here by doing so he achieves a level of intimacy that’s kind of shocking. The use of music, the way cinematographer Javier Aguirresarobe’s (Fright Night) images paint the perfect surrealistic silhouette, how Nancy Richardson’s (The Vow) edits have a seamless quality that, at least early on, has an uncanny ability to mirror R’s inner dialogues, Levine orchestrating with a dexterous confidence I found thrilling.

I do wish the climactic siege played out better than it does, that the emergence of Julie’s militaristic father (played by John Malkovich exactly as you’d think he’d play him) could have gone in a direction I wouldn’t have been able to easily anticipate. Yet when the focus stays on our two heroes, when their story remains front and center, Warm Bodies achieves a heartfelt ebullience that’s inspiring, and for a movie about the undead watching this made me feel as alive as anything I’ve seen in ages. 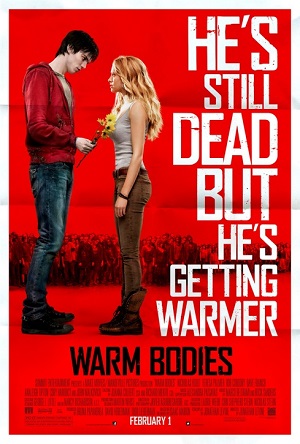